Piyush Arora
(PiyushArora)
Author Bio
Piyush, an Electronics Engineer with an MBA in Finance, is continuously looking for discrepancies in market pricing. He likes to research tech stocks that incur minimal risks and offer healthy returns, over the short-medium term period.Follow @BuzzVestor

The Street has been eagerly awaiting the launch of Intel's (NASDAQ:INTC) Cherry Trail and Advanced Micro Devices' (NASDAQ:AMD) Beema and Mullins processors. With their architectural improvements and reported performance gains, competition in the mobile chip industry may very well intensify. But even so, there is reason to believe that the duo won't be able to dislodge Qualcomm (NASDAQ:QCOM) from its pole position in the high-performance mobile chip segment anytime soon.

Power of ARM
Investors should note that the Android platform runs on almost any CPU in the world. But the ARM (NASDAQ:ARMH) architecture is reputed for its speedy performance in low-voltage environments, which is why hardware manufacturers and software developers tailor their offerings for ARM – the core architecture of Qualcomm's Snapdragon chips.

This essentially means that ARM-based Android applications need to be recompiled and redesigned for their performance to be similar on AMD and Intel-based Android devices. But, since the ARM architecture powers about 90% of the smartphones, there isn't much incentive for software developers to customize their software applications for Intel and AMD platforms.

The catch-22 situation creates an entry barrier in the high-performance Android-based chip market, and makes it hard for x86-based chips -- like Intel's Cherry Trail and AMD's Beema and Mullins -- to establish a foothold in the industry. More important, it protects Qualcomm's established market position.

Emulating Android
To compete with Qualcomm, Intel bundles its x86-based Bay Trail chips with a binary translator. The emulator recompiles Android-based apps, and converts the native ARM code to native x86 code – something that Intel chips can run.

The chipmaker claims that the translator can work without utilizing a substantial amount of system resources. Research conducted by ARM, however, suggests otherwise. 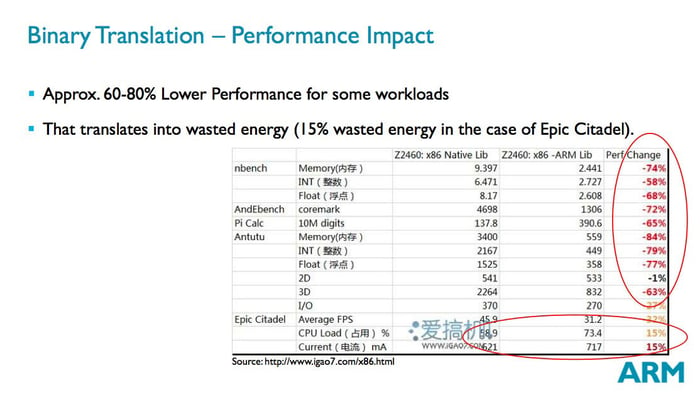 Rod Watt of ARM recently concluded that binary translation drains the CPU and battery resources by as much as 40% and 90%, respectively. This inefficient utilization of system resources can prove detrimental to Intel's growth in the cutthroat, ARM-based, mobile chip industry.

AMD doesn't support Android applications on its x86-based Beema and Mullins chips either. The chipmaker has tied up with BlueStacks, to provide its users a virtualized Android environment on AMD-based Windows PCs. Available for $39.95, the emulator is designed primarily for Android software development – thus limiting AMD's growth potential in the Android-based chip segment as well.

Culmination of x86 and ARM?
Intel hasn't announced any plans to adopt the ARM architecture for its upcoming mobile chips. The chipmaker believes that its binary translator can run about 90% of the total Android apps available in the Google Play Store. But given the system requirements of the emulator, merely being able to run those apps won't necessarily translate into a flawless user experience. For this reason, investors shouldn't expect much from Intel in the Android-based mobile computing space.

AMD, on the other hand, has a rather interesting roadmap. The chipmaker intends to develop systems-on-chip simultaneously based on ARM and x86 platforms. Codenamed SkyBridge, these chips are set to be unveiled in 2015. Without delving into its technical or designing aspects, the chipmaker stated that its ARM core would run Android.

Foolish final thoughts
The tablet and smartphone industries are slowing down. Amid this macroeconomic scenario, Intel's decision to go on its own can limit its growth potential. AMD, however, presents an optimistic outlook.

Its Beema and Mullins chips may not prove enough to capture substantial market share from ARM-based Qualcomm offerings over the coming year, but its SkyBridge chips -- marking a shift in AMD's product direction -- might contribute in establishing its foothold in the Android-based chip industry over the longer run.