FCA is counting on the all-new 2015 Jeep Renegade to introduce the venerable SUV brand to new markets around the world. Source: Fiat Chrysler.

This is a big deal. Newly merged FCA's global product portfolio is currently a messy mashup, with many areas of overlap -- and several important market segments where the company has no strong offerings at present.

This plan is CEO Sergio Marchionne's roadmap for changing that. If it's successful. FCA will be transformed into a thriving, competitive, substantially more profitable global automaker.

But that's a big "if." The plan is ambitious and expensive, and FCA is not exactly rolling in cash at the moment. There are reasons to be optimistic, though, starting with this: Marchionne's last five-year plan was also seen as overly ambitious -- but Fiat and Chrysler largely delivered on its goals.

Last weekend, I outlined the whole plan and summed up how it will affect each of FCA's brands. This week, I'm going to go into more detail on FCA's plans for each of its brands, looking in more detail at the products, strategies, and expansions that the company plans to put in place over the next five years.

Why FCA's hopes are on Jeep
Jeep brand chief Mike Manley said that Jeep will be FCA's "lead global brand." This is perhaps the biggest news from last week: FCA is starting an aggressive push to establish the venerable SUV brand as a major market presence all over the world.

Why? Simple: SUV sales are booming all over the world. And Jeep is still an enormously strong brand, one that's widely known -- and one that is associated entirely with SUVs. What's more, Jeep's current product portfolio is already in pretty good shape. The current Wrangler and Grand Cherokee are selling well, the new midsize Cherokee is off to a strong start, and the new small Renegade gives Jeep a strong entry in the booming small-SUV segment.

FCA is betting it can use that brand strength and Jeep's current product portfolio -- starting with the new Renegade -- to open doors in new markets around the world. But FCA isn't planning on changing the Jeep brand: The Wrangler will continue to be Jeep's centerpiece, and all other Jeeps will be offered in Trail Rated versions.

A hoped-for 138% increase in global sales
New assembly lines in Brazil, Italy, India, and China will push total Jeep production to 1.9 million vehicles a year by 2018. (That's up from just under 800,000 Jeeps last year.) That assumes Jeep sales will grow at a 20% annual rate.

That's an ambitious assumption. Manley pointed out that Jeep grew at an average annual rate of 24% between 2009 and 2014, as U.S. sales boomed and exports grew. But further U.S. growth is likely to be pretty limited: What will drive those big growth numbers over the next five years?

Mostly not the U.S., Manley said. And mostly not from additional models, as you can see in this slide from Manley's presentation. 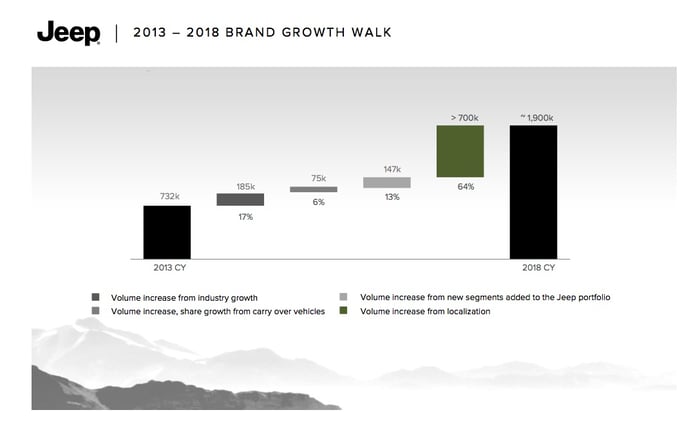 As you can see, the vast majority -- 64% -- of the hoped-for growth for Jeep will come from "localization," or the process of establishing Jeep around the world.

FCA divides the world into four regions: North America, or "NAFTA"; Latin America, or "LATAM"; Europe, the Middle East, and Africa, or "EMEA"; and the Asia-Pacific region (including China and India), or "APAC."

Manley expects Jeep sales to grow by less than 10% a year in NAFTA -- essentially, they'll grow along with the overall U.S. market. But he sees the brand growing by more than 50% in Latin America, about 45% in Asia, and about 35% in the EMEA region.

The thinking is that SUVs are a growing segment all over the world, and Jeep has the brand strength and products to capture a (significantly) outsized share of that growth. Leading that charge will be the all-new Renegade, Jeep's smallest offering -- and one that's aimed squarely at younger buyers. The Renegade is extremely important: Rivals like Ford's (NYSE:F) EcoSport and General Motors' (NYSE:GM) Opel Mokka have been racking up big sales gains in overseas markets. The thinking is that the Renegade, an honest-to-goodness Trail Rated Jeep, might bring something to the segment that no other rival can match: Genuine off-road credibility.

A lot of Jeeps, but not a lot of new Jeeps
As I said, FCA isn't counting on new products to drive Jeep's global growth. Jeep's product portfolio won't change significantly in the coming years, as you can see in this slide from Manley's presentation: 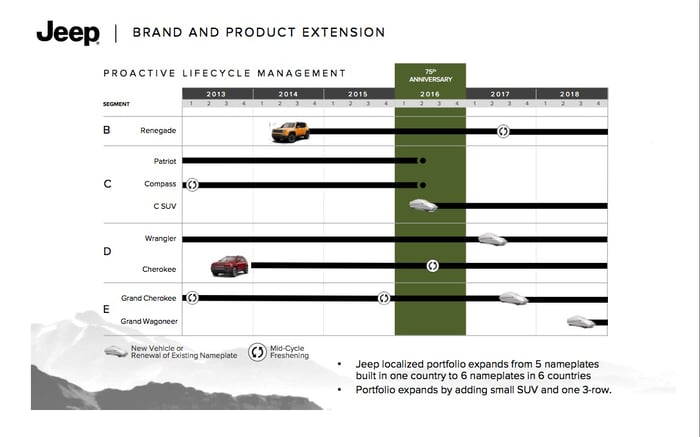 New models? Just a couple: The Patriot and Compass will be replaced by a single all-new model in 2016, and the long-rumored big Jeep SUV, the three-row Grand Wagoneer, is in fact coming -- but not until 2018. (Yes, Jeep fans, they confirmed the Grand Wagoneer name last week.)

The upshot: Jeep isn't changing, it's just going global
As any Jeep enthusiast will tell you, the Wrangler is the most important product, the one that sets the tone and standard for all of the others. That won't change, Manley said. Nor will Jeep move away from its recent approach of assuring that every model is available in a "Trail Rated" version with solid off-road capability.

Long story short: Jeep's global expansion is the centerpiece of FCA's five-year plan. The hope is that Jeep will account for about a third of the company's total global sales by 2018.

Can they get there? It seems plausible -- more plausible than some of FCA's other plans, because of the strength of the Jeep brand and the fact that Jeep's product portfolio is already in pretty good shape. But much will depend on how well Chinese buyers react to the Jeep brand. We'll find out.