Russia's acquisition of Crimea has Germany uneasy about its dependence on Russian natural gas. Now Royal Dutch Shell (NYSE:RDS.A) can pat itself on the back for deciding to acquire significantly more LNG liquefaction capacity than its big oil peers by 2017. Europe's gas situation is very complicated, but Shell is shaping up to be a big beneficiary of the current German-Russian angst.

Will liquefied natural gas solve Europe's problems?
Putting natural gas on boats and shipping it to Europe in order to avoid Russian pipelines sounds like a surefire way for Europe to solve its problems. Yet between 2014 and 2015, the majority of Germany's new utility generation is expected to come from coal and wind. Their combined new capacity of 8.7 GW is significantly more than the 0.5 GW of new natural gas.

Beyond the fact that Germany is trying to shift away from gas altogether, the world LNG market does not work in Europe's favor. Europe's LNG import prices are high, but Asia's and Latin America's import prices are higher. Based on March prices it makes much more sense for Qatar to ship its LNG to China where it can fetch $19.60 per mmbtu versus Spain where it would fetch $15.85 per mmbtu. Given German industry's revolt against high energy prices, growing German coal usage, and the potential for rising gas prices to push more consumers into renewables, don't expect Germany to willingly boost gas prices anytime soon.

Things have gotten so bad in recent years that some European LNG import terminals report to be operating at 10% of capacity, and in March Spain became Europe's biggest LNG exporter by simply reexporting its LNG imports.

At the end of the day, unless Europe is willing to pay roughly 25% more to compete with Asian LNG prices, don't expect Europe's LNG capacity to supplement Russian gas. 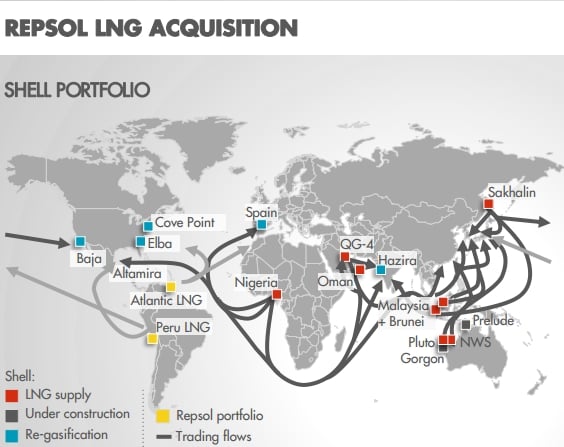 LNG might not save Europe, but Shell doesn't mind
Shell's LNG assets are only nominally present in Europe. It does have a regasification facility in Spain, but its assets are focused on Asia and the Americas. The net benefit of the Russian instability is that countries are realizing the importance of having a diversified gas supply structure. Nations have been reminded that having access to LNG in the event of a Japanese nuclear disaster or Russian supply constraints gives peace of mind, even if the LNG assets are not heavily used. Since Shell is focused on liquefaction assets, it does not mind who it sells LNG to; it only cares that someone is buying.

Shell is one of the best LNG plays
In 2017 Shell is expected to have more equity LNG liquefaction capacity than its next three biggest competitors: ExxonMobil (NYSE:XOM), Chevron (NYSE:CVX) , or Total (NYSE:TTE). Shell's profit margin of 3.7% is thin compared to ExxonMobil's profit margin of 7.9%, but as a play on LNG growth Shell is in a better position. Shell is weighted toward natural gas with comparably small liquids production.

LNG will really help Shell over the next decade
LNG's margins are not sky-high, but the recent Russian instability is cementing the LNG market as Shell's growth opportunity. LNG import facilities offer an easy way for a nation to diversify its energy sources in the midst of an unstable world. Big LNG projects are expensive, but at least Shell has a solid growth path ahead.