Jumping nearly 10% in after hours trading, shares of Enphase Energy (NASDAQ:ENPH), the global leader in providing microinverter systems for the solar industry, seemed a lot more interesting to investors after the company released its first quarter earnings. The company, which is an industry leader in the microinverter market, has seen its  stock ride a bumpy road this past year. Shares currently lag the S&P 500 by about 28%. 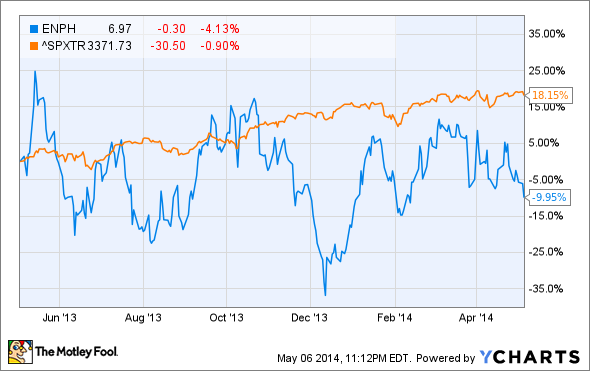 Why were investors so happy after the earnings release? Let's take a look.

Growing the top line
Enphase recorded $57.6 million in revenue, representing growth of 26% year over year. Selling approximately 423,000 microinverters, Enphase's sales equal about 93 MW (AC) which represents an increase of 37% compared to the first quarter of 2013. Management seemed somewhat surprised at the company's revenue growth; like most companies during this earnings season, management blamed the weather for adversely affecting the company's performance.

The weather wasn't bad all over, however. Paul Nahi, CEO of Enphase energy, said that he is "excited with the impressive revenue growth in our EMEA business led by the U.K. where revenue was up over 60% sequentially and our early success in the Australian market."

Okay in the U.K.
When one thinks of a strong solar market, Australia is a logical choice. The U.K., on the other hand, is better known for its fog and rain than its bounteous sunshine. Nonetheless, the solar market is booming in the United Kingdom. If the company's past performance in this market is any indicator of its future success, then England and its neighbors will be quite profitable for Enphase and will likely contribute to greater top-line growth in the future.

According to industry research firm, NPD Solarbuzz, the U.K. will be the largest solar market in Europe in 2014. There are already more than 120 large-scale PV projects that have been approved; of these, most are expected to be completed by the end of the year. In a recent report, the U.K. identified its goal of installing 20 GW of solar capacity by 2020, suggesting that Enphase's opportunities in the U.K. are ample.

Management estimates that its market share in the U.K. market is around 7%, but the company took steps in the last quarter to help grow that number. Enphase added five new partners to help build out its distribution channel, and it expanded its sales team "to address distribution, strategic accounts, inside sales and project development." It also forged some new relationships with installers in the residential space.

Picking up partners
Although the company has developed some new partnerships, it should also benefit from some older ones, namely Hanwha SolarOne (NASDAQ:HQCL). One solution that Enphase offers to both residential and commercial customers is its Enphase M215 Microinverter, which is compatible with Hanwha SolarOne's HSL 60 Poly module. Hanwha has experience in England. Most recently, it announced a deal in which it would supply a 15 MW solar plant in Suffolk, England with 58,000 of its PV modules. At the end of 2013, Hanwha SolarOne was guiding for 25% shipment growth in 2014; this suggests that there is increasing opportunity for Enphase to benefit from the relationship.

In addition to its partnerships with Hanwha SolarOne, Enphase has teamed up with LG, Kyocera, and other PV module manufacturers in the U.S.

Foolish final thoughts
Enphase delivered another impressive quarter. Although it's not profitable yet, it's non-GAAP net loss of $0.10 per share beat estimates by $0.03 and was considerably better than the net loss of $0.21 per share that it recorded in the first quarter of 2013. Addressing the company's quarterly earnings, Paul Nahi elaborated on Enphase's impressive performance in saying, "Our focus on working capital management, combined with our top line performance and further gross margin improvements, enabled us to achieve positive cash flows for the second straight quarter."