According to the head of Samsung's (NASDAQOTH: SSNLF) mobile group, J.K. Shin, the Galaxy S5 has sold better out of the gate than the prior generation Galaxy S4 at the same point in its ramp. Indeed, Shin noted that the company has sold "over 11 million units" of the Galaxy S5 in the time it took the previous Samsung flagship to sell 10 million units. While this may be an initial sign of success for the Galaxy S5, this year-over-year comparison isn't quite apples to apples (no pun intended).

Double the launch countries will affect early sales
The prior generation Galaxy S4 was available in 60 countries at its initial launch, while the latest Galaxy S5 rolled out in 125 countries at launch. Clearly, the year-over-year comparison isn't necessarily indicative of the sales that this phone will generate in its year-long run as Samsung's flagship, since the Galaxy S5 is more widely available early in its launch cycle than the previous Galaxy S5 was.

Aggressive price cuts and promotions may also be helping
If you go to Verizon (NYSE:VZ) Wireless' website, you'll see an example of how aggressive Samsung and its partners are being in lowering the prices of this phone to drive sales: 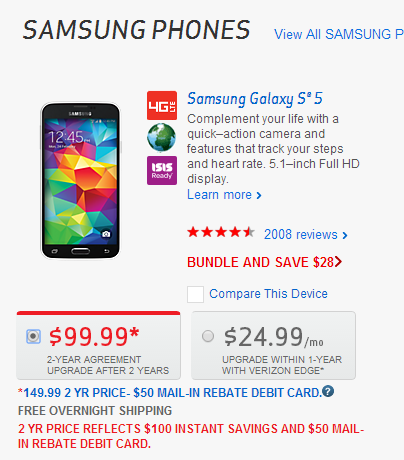 In fact, Verizon isn't the only one offering this kind of a deal. For instance, you'll find the following deals at the various carriers and retailers:

On top of that, prior promotions at Verizon and the like included "buy one get one free" and other similar deals. In short, while Samsung claims that the initial sales bump for its Galaxy S5 has been driven by the practicality of the new features on the S5, a lot of the sales strength may actually be due to aggressive pricing on these new phones.

What now?
While the Galaxy S5 year-over-year comparisons to the Galaxy S4 have been positively affected by lower prices and broader availability, it will be interesting to see if this momentum can hold up. With Apple's (NASDAQ:AAPL) larger iPhone coming in either August or September, and with new flagships such as the LG G3 on the way, Samsung may yet have difficulty sustaining the early momentum that it is currently seeing with the Galaxy S5 (or if it drives higher sales, it may do so at lower prices).

The "big picture" will be more evident by the end of the quarter once the initial wave of pent-up demand for the new phone has been satisfied and Samsung is able to get a read on the long-term trends of S5 sales. Of course, Samsung has claimed that it plans to launch other variants for various regions (the oft-rumored Galaxy S5 Prime, for example), which could help sales momentum, but again, it won't be too long before Apple's next phone comes in and potentially puts the brakes on the momentum there.

While the initial Galaxy S5 news is welcome, it's still too early to tell how the full year is going to play out for Samsung. The next couple of quarters should tell us whether Samsung has the staying power of Apple, or if its sales and margins are subject to long-term pressure.