Louis Battaglia
(ljb716)
Author Bio
Louis began contributing to Motley Fool in 2014. He has worked as a freelance writer and editor for a number of online and print publications since 2008. His area of interests include macro issues, monetary policy, currencies, housing, telecom, commodities, fiscal policy, and the sharing economy. Follow @ljb716 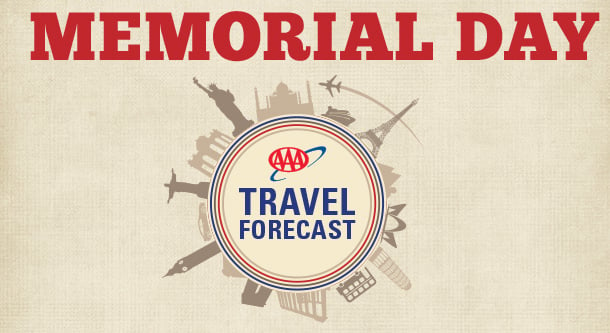 Memorial Day is rapidly approaching and an estimated 36.1 million people are gearing up for a trip of some kind to celebrate the official start of summer, says AAA Travel in its 2014 Memorial Day Travel Forecast. That's an uptick of 1.5% from last year, which saw 35.5 million people travel during the holiday weekend, and would be the highest number of people on the move for summer's first holiday weekend since 2005 and the second highest since 2000.

AAA says that the increased number of travelers is due to several factors including this past year's harsher than usual winter. This winter was so cold that AAA reported that dead-battery service calls increased nearly 12%.

"As we enter into the summer travel season with warmer temperatures and tulips in bloom, thoughts of historic cold are still fresh in the minds of Americans in many parts of the country," said Marshall L. Doney, AAA Chief Operating Officer, in a report on AAA's website. "The winter blues appear to have given Americans the travel bug and a case of cruise cabin fever as travel for the holiday is expected to hit a new post-recession high."

A steadily improving economy was also cited as cause for the projected increase in Memorial Day travelers. The forecast cited a number of positive statistics including an 8% increase in household net worth over the past year, along with a 3.4% increase in personal income. With a 2% increase in real disposable income, AAA is projecting that consumer spending will be 3.6% higher than last year. AAA indicates that surveys in Consumer Comfort, Consumer Sentiment, and Consumer Confidence all show improvement over the past year as well and further bolster confidence that Memorial Day travel will increase.

What you can expect to pay while traveling

Those driving to their destination, which AAA estimates will be roughly 88% of vacationers, can expect gas prices to be around last year's average Memorial Day weekend price per gallon, $3.63, if not a little bit less. Travelers who rent a car will pay an average weekend rate of $44 per day, just 1% higher than what renters paid on Memorial Day weekend in 2013.

Choosing to drive may seem the most cost-efficient way of getting to your destination, but remember that law enforcement agencies will be out in force looking for speeders and people not wearing seat belts. An average speeding ticket costs around $150, reports Statistics Brain. As for those who refuse to wear seat belts, the National Highway Traffic Safety Administration is letting travelers know that 10,000 law enforcement agencies will participate across the country in the "Click It or Ticket" campaign running from May 19 through June 1. The top three driving citation states are New York, Ohio, and Pennsylvania, according to Statistics Brain. 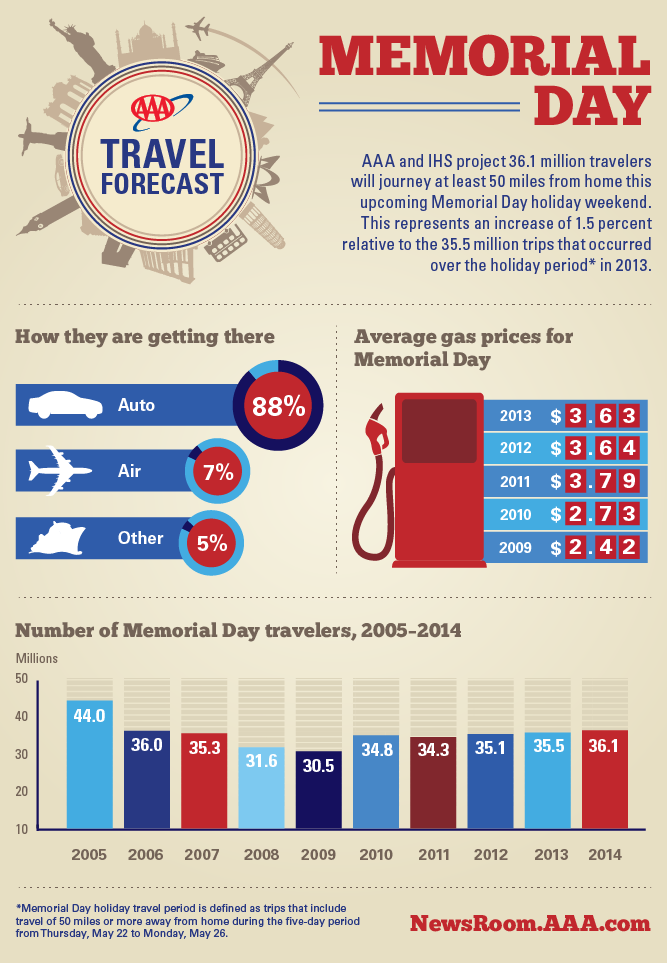 If you want to skip the traffic (and the risk of getting a ticket) by flying instead, you're going to pay a premium. Vacationers traveling by plane to their destinations will face a steeper price increase as airfares increased 6% to $227 from $215 last year. That estimate is based on the average round-trip discounted fares to the top 40 U.S. routes. While only 7% of Memorial Day vacationers are expected to travel by plane, that number has seen a 2.4% growth from last year. That would put the number of air travelers at roughly 2.6 million, up from 2.5 million in 2013. The number of air travelers has not advanced beyond 2.7 million since the onset of the recession.

The remaining 4.8% of Memorial Day travelers will be utilizing alternative means -- trains, bicycles, or cruise ships -- to get where they're going.

What you can expect to pay when you get there

Regardless of your means of transportation, you can expect your hotel stay to cost only slightly more than it did last year. The average stay in a AAA Three Diamond hotel will only cost 2% more, with the average nightly weekend rate running $169 a night, up from $166 a night last year, and the average hotel rate for a AAA Two Diamond hotel will cost 3% more at $124 per night. These estimates are based on AAA's Leisure Travel Index.

Destinations may prove to be more expensive, however, depending on where you're headed. One of the most popular family destinations is to Walt Disney Co.'s (NYSE:DIS) California theme park. Families headed to Disneyland and the Disney California Adventure Park will pay a higher single-day ticket price of $96, an increase of $6 or 4%. Parking also increased by $1 to $17. The price change went into effect on Saturday at midnight.

Disney also raised its ticket prices at Orlando's Disney's Magic Kingdom back in February to an industry high $99.

"Like any business, we periodically evaluate our pricing and make adjustments based on a variety of factors," the park said in a statement, according to the Orlando Sentinel. "A ticket to our theme parks represents a great value, particularly when you look at the breadth and quality of attractions and entertainment we offer and the special moments guests experience with our cast."

The other surrounding Disney World Parks will cost more as well, with Epcot, Animal Kingdom, and Hollywood Studios all raising their single-day admissions prices to $94.

What you can expect to pay if you stay home

If you decide to skip the Memorial Day vacation, there will be plenty of sales happening where you can spend the money that you saved by not traveling. Most major retail outlets will be offering some kind of Memorial Day deal. A couple worth noting: Macy's (NYSE:M) is offering a 30%-75% off storewide sale from Wednesday through Monday, while Target (NYSE:TGT) is advertising 20% off outdoor items like tents, grills, and pools, and Wal-Mart (NYSE:WMT) is holding an online sale on all patio furniture and outdoor items, along with some clothing and electronics.

If you stay home this weekend, at least you can stock your patio or yard with some new toys to keep you occupied while you BBQ.