In the article Intel Corporation's Atom Z3580 Is Another Big Step Forward, we talked through a set of Intel (NASDAQ:INTC) marketing claims touting the performance of its Z3580. Intel's chip competes well on CPU and GPU performance against the Qualcomm (NASDAQ:QCOM) Snapdragon 801 found in flagship phones such as the Samsung (NASDAQOTH: SSNLF) Galaxy S5 and the LG G3, losing only in camera/imaging performance and integration. However, a reader noted in the comments section of that piece that a more appropriate comparison would be to Qualcomm's recently announced Snapdragon 805.

Putting the pieces together
We now have preliminary Atom Z3580 benchmark numbers -- run on Intel's 4.5-inch reference design -- and we now have performance numbers from Qualcomm's Snapdragon 805, courtesy of a benchmarking session done by AnandTech. Note that the numbers from Qualcomm are from the company's 10.6-inch Mobile Development Platform, so the Qualcomm platform probably can stretch its legs a bit with respect to power consumption.

That said, let's take the numbers that Intel gave for GFXBench 3.0 and 3D Mark Unlimited Ice Storm and see how these two parts actually stack up. First, GFXBench 3.0 T-Rex (these results are all at the same resolution): 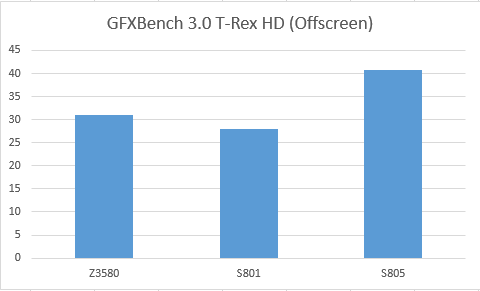 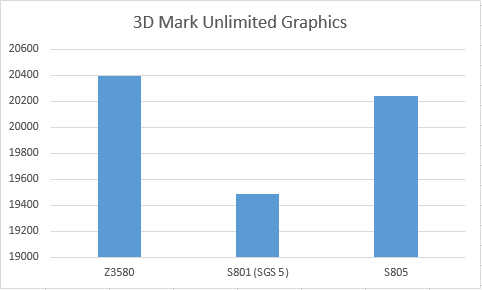 CPU performance -- Intel's the winner
When it comes to general purpose CPU performance, it's very hard to find a good benchmark that will give "accurate" results. Synthetic benchmarks can be useful, but are very easy to manipulate, and web-browser-based benchmarks are usually just as dependent on the optimization of the JavaScript (or similar) engine as they are on the actual CPU. Intel likes to promote Mobile XPRT as a good test of "real-world" performance, but those also seem to be very software/browser dependent, and could obscure the underlying CPU performance.

Let's turn to the 3D Mark Unlimited Physics test. This is a test that performs plenty of complex calculations in what is probably the most demanding CPU task that a user is likely to perform on a mobile device -- physics simulation in a game. This is a test that actually exposed a pretty significant glass jaw in Apple's A7, and is, at the very least, better than most of the synthetic CPU benchmarks available on the Google Play store. 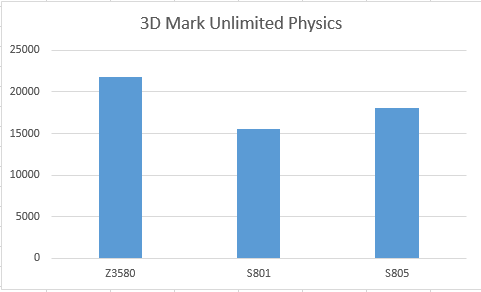 Intel was kind enough to provide me with a breakdown of the sub-scores for the Atom Z3580 reference smartphone, and I have included the physics results here for the Z3580. It's no contest -- the Atom Z3580 in a 4.5-inch smartphone pulls nicely ahead (about 20% more performance) of the Qualcomm chips in this test. In terms of CPU performance, Intel's Silvermont does very well in real-world complex workloads.

Foolish bottom line
The Snapdragon 805, as tested in Qualcomm's reference tablet, appears to offer lower CPU performance than the Z3580 in the reference smartphone than while offering higher graphics performance. However, what we don't know is how the Snapdragon 805 will perform in a 4.5-5.0-inch handset or how well Z3580 will perform in a real-world implementation. Further, even if Qualcomm has been able to pack this much more graphics performance into the Snapdragon 805 over the 801, it's unclear if the company dramatically increased graphics area (and therefore increased costs) to do so.

At any rate, Qualcomm appears to have the more competitive chip assuming that it can deliver this kind of performance in a handset and sell the chip at a reasonable cost structure. Further, Qualcomm's imaging subsystem is far ahead of what Intel currently has in its mobile platforms, which is very important as megapixel count is a selling-point for higher end devices. Intel has made a lot of progress (and is delivering leadership CPU performance and did a good implementation of the PowerVR G6430), but as noted in the previous article, it is still not quite in a position to capture a leadership position for hero devices as the rest of the system-on-chip needs to catch up with what the company has done on CPU and graphics.