Those investing in dry shipping companies have been waiting, and waiting, and waiting for a turnaround in the shipping industry. The shipping headwinds have beaten back any substantial recovery, with a lack of shipping demand during the global economic downturn, and new ships ordered during the boom adding extra supply during the glut in demand. An investment in dry shipping so far has been a call on just which company can survive the storm for when shipping finally does recover, which many are predicting will be very soon.

For two of the major shippers, DryShips (NASDAQ:DRYS) and Diana Shipping (NYSE:DSX), one chart demonstrates which company will make it not only as the current clouds part, but also through the next rough economic weather to hit the industry. 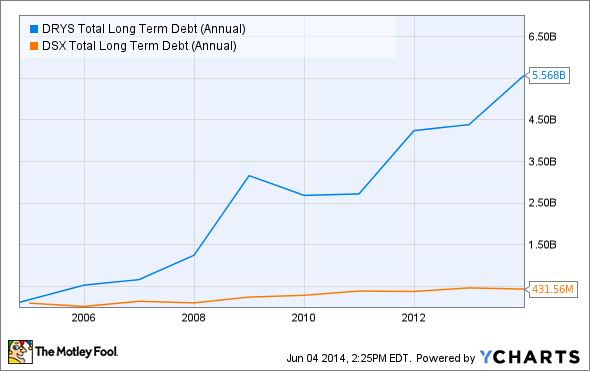 The most obvious takeaway from this chart is the incredible rise of DryShips' debt as compared to Diana Shipping's. Now, a large portion of this debt is from DryShips' subsidiary, Ocean Rig UDW (NASDAQ:ORIG), of which DryShips owns 78%. But even backing out Ocean Rig's debt of $4.4 billion, DryShips still has $1.1 billion in debt.

Altogether, DryShips' debt load cost $114 million in interest last quarter, up from $57 million a year ago. These interest payments weighed down any chance for DryShips to have a positive income, instead losing $34.5 million this last quarter.

Diana Shipping, on the other hand, paid less than $2 million in interest on its roughly $430 million of debt.

Management
The above chart not only makes a numerical case for Diana Shipping over DryShips, but investors can make inferences on just how well each company is managed. Diana Shipping held off from excessive borrowing even as interest rates and the cost of borrowing cratered. DryShips, of course, did the opposite. Even with less debt, Diana's fleet has an average age of 6.7 years compared to DryShips' 9.7 years.

DryShip's CEO, George Economou, is not the most shareholder-friendly manager. If you need another chart to demonstrate the case for betting on Diana Shipping's management over DryShips', take a look at this: 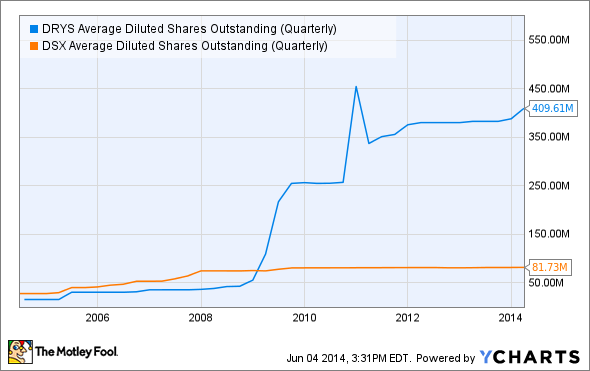 As DryShips dilutes shares and shareholder value, Diana Shipping has kept a level outstanding share count over the past four years. And in fact, Diana Shipping recently approved up to $100 million in share buybacks. While buybacks don't guarantee a good investment for the company's capital, it is a way to return value to shareholders outside of dividends.

An easy choice
There are a few reasons DryShips would make a better investment over Diana, like its ability to quickly capture a rise in shipping rates by operating on spot prices instead of Diana's contract-based fleet, and its exposure to the oil rig industry. However, for a long-term investment in a sustainable business, history points to Diana Shipping as a better choice.