On the heels of uncorking a $14 billion asset sale of its consumer care business to Bayer, Merck (NYSE:MRK) is inking a deal to acquire Idenix Pharmaceuticals (NASDAQ: IDIX).

The $3.9 billion acquisition barely dents Merck's balance sheet, which sports cash and long-term investments of more than $35 billion (including the windfall from Bayer), but it offers insight into how Merck may spend its cash hoard. So let's take a closer look. 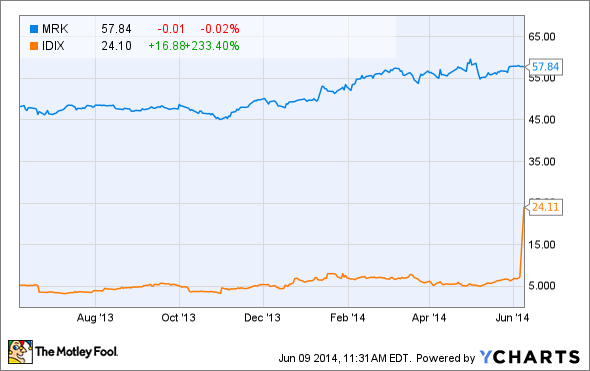 What Merck gets
Merck wasn't shy about paying up for Idenix. The company paid a jaw-dropping $24.50 per share in cash, or 3.4 times Idenix's Friday closing price of just above $7, to capture Idenix's portfolio of potential hepatitis C treatments.

Interest in hepatitis C drugs has soared over the past few years following Gilead's (NASDAQ:GILD) $11 billion purchase of Pharmasset in 2011. That deal gave Gilead the hepatitis C drug Sovaldi, a next generation therapy that not only cut treatment periods in half to as little as 12 weeks but eliminates the use of side-effect laden interferon in some patients.

During its first full quarter on the market, Sovaldi sales rocketed north of $2 billion in Q1, but it isn't just Sovaldi's success that has likely caught Merck's attention. Despite showing inferior efficacy in trials to Sovaldi, Olysio has carved out a valuable niche as a combination therapy alongside Sovaldi in patients resistant or unable to take interferon. That niche allowed Johnson & Johnson to sell $350 million worth of Olysio in the first quarter.

In a bid to capture a share of this market, Merck is already advancing its own hepatitis C drugs through trials and the Idenix acquisition significantly bolsters Merck's position; giving it a much larger and potentially more robust set of treatment options that it can roll-out in the coming decade.

Acquiring Idenix also nets Merck Idenix's intellectual property. That could give Merck a backdoor way of profiting from the hepatitis C market given that Idenix has already filed suit against Gilead alleging that Sovaldi violates its patents.

Fool-worthy final thoughts
Idenix promising drugs include Samatasvir, an NS5A inhibitor that is currently in Phase 2 trials as part of a combination therapy with Johnson's Olysio, and IDX21437, a nucleotide protein inhibitor that helps prevent the virus from replicating by targeting the NS5B protein (the same protein Gilead's Sovaldi targets).

That suggests that Merck could leverage these two drugs in multiple ways, including as part of combination therapies alongside Sovaldi, or as a Sovaldi alternative. Given the size of the check Merck wrote, the company seems to believe either of those opportunities could have multibillion blockbuster potential.