With the SEC 13F filings in the books, we can see what the fund that was started by a man now worth $23 billion has been buying and selling. It turns out he hasn't taken too kindly to the banks.

In the last quarter of 2013 we learned Soros Fund Management had bought a total of $320 million worth of Citigroup (NYSE:C), JPMorgan Chase (NYSE:JPM), and Regions Financial (NYSE:RF). Yet the opinion on those banks must've changed quickly, as by the end of March, all three had been sold off: 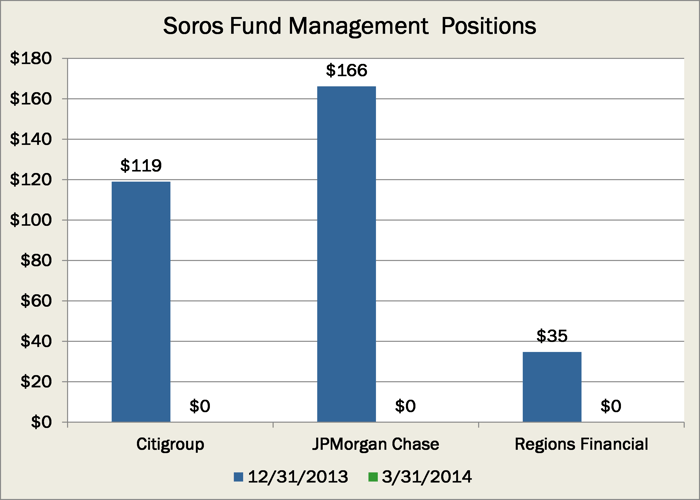 And while the fund has delivered a remarkable track record -- the reported average annual growth stands at an astounding 20% over a 40-year stretch -- it must be noted that it's active in the markets. In fact, of the roughly 240 different investments it had in at the end of 2013, roughly a third of them were gone by March.

We do take the long-term perspective here, but at times a quick glance into the different moves by a well-known and well-regarded investor like George Soros can provide a solid idea or two.

Of the three big-bank sell-offs, the most understandable is probably Citigroup. To put it simply, it has had a tough start to 2014. In February it announced that it had to slash $360 million off its net income thanks to fraud from its unit in Mexico. Less than one month later we learned it was the only bank to fail the yearly Comprehensive Capital Analysis and Review from the Federal Reserve. And while it may have delivered solid results in the first quarter, of all the positions Soros amassed, Citigroup undoubtedly had the most troubling of trends.

Next on the list is Regions Financial, which represented just a hair above 10% of $320 million in holdings of these three by Soros Fund Management. Its 2014 has been much more quite than Citigroup, but that is true of most banks. Regions had a solid but unspectacular year in 2013. However, the reality that the Federal Reserve projected it would lose $1.4 billion after nine quarters of stressed results was a touch worrying. And although it still has things to work through, the trusted blocking and tackling analogy used in football would be a good way to describe what it is currently going through.

The biggest worry for Regions Financial is the reports that U.S. regulators are diving further into the mortgage operations at it and its fellow regional-bank peers from before the financial crisis. This will be important to watch, and when you also consider that its CEO began his remarks at a recent presentation by saying, "We really think we're poised for growth," there's no doubt the remainder of 2014 could mean big things for Regions.

Lastly there is JPMorgan Chase, which stands as the largest bank in the country. It had a tough go of things in April, as its earnings-per-share results for the first quarter came in 9% below analyst expectations. But as my colleague John Maxfield noted shortly thereafter, it offers a compelling dividend, and it's currently priced very reasonably, at 1.5 times price to tangible book value.

Although the time owning it was incredibly short, Soros seemed to feel as if JPMorgan Chase was the most worthwhile investment when you consider the massive position, and I'd have to agree with him. But I'd plan to keep it longer than just three months.