Disney's (NYSE:DIS) ABC network recently confirmed that Elsa, the star of its animated blockbuster Frozen, will appear in live-action form during the fourth season of its TV series Once Upon a Time. Elsa, played by an unidentified actress, briefly appeared during the show's third season finale, "There's No Place Like Home."

Once Upon a Time is known for bringing characters from fairy tales, legends, and books into the real world via magic portals. Elsa and Anna will join the show's large cast of characters, which already includes Snow White, Prince Charming, Pinocchio, Belle, Beast, Peter Pan, Mulan, Robin Hood, and many others.

While it's easy to dismiss Disney's live-action Frozen tie-in as a simple marketing ploy, there's much more to this strategy than meets the eye.

The business of ABC
ABC, which represents the bulk of Disney's Broadcasting Segment, is traditionally one of Disney's worst performing business divisions. It is frequently overshadowed by the cable networks division -- which includes ESPN, A&E, and the Disney Channels -- as well as more popular networks like CBS (NASDAQ:VIAC).

As a result, ABC's bottom line performance over the past four quarters has been unimpressive and uneven:

Broadcasting income notably stabilized last quarter, thanks to higher affiliate revenues and lower expenses, but Disney also noted that lower ratings resulted in lower advertising revenue. Nonetheless, the Broadcasting Segment is shrinking in importance -- it only accounted for 29% of the Media Networks Segment's revenue and only 7% of its bottom line. The remainder came from Disney's cable networks.

The business of Once Upon a Time and Frozen
Once Upon a Time's Live+DVR ratings were fairly strong in the first season, netting 12.5 million viewers. However, that figure slipped to 10.9 million in its sophomore season and 9.6 million during its third.

Once Upon a Time. Source: ABC.

Frozen could change all of that. Frozen is now the highest grossing animated film in box office history, grossing $1.26 billion worldwide on a budget of $150 million. Its soundtrack spent 13 consecutive weeks at the top of the Billboard 200, and is currently the third best-selling album in America.

Disney named Frozen as a key contributor to the growth of its Studio Entertainment segment during the first and second quarters of 2014, when revenues respectively soared 23% and 35% year-over-year. Those kind of numbers indicate that Elsa could give Once Upon a Time's ratings a massive boost in the fourth season -- which will lead to better advertising rates and bigger profits for ABC.

Disney's Agents of Fantasyland
To understand Disney's TV plans for Frozen, we should examine another show that bridges the gap between big and small screen franchises -- Marvel's Agents of SHIELD.

I've previously argued that the ratings of Agents of SHIELD don't matter at all, since the entire show is essentially a 42-minute commercial for Disney's big screen Marvel films. However, SHIELD only featured characters from the main films on rare occasions, since film actors can be harder to sign on for TV guest roles.

With Once Upon a Time, Disney has laid claim to the entire realm of fairy tales and legends, in the same manner that it claimed its corner of the Marvel Universe. Once Upon a Time reinforces the notion that Snow White, Sleeping Beauty, Mulan, Ariel, and Belle all "belong" to Disney, although the rights to these characters are all in the public domain.

This strategy has been so successful that it's now nearly impossible to mentally separate these characters from their Disney counterparts. Disney has already done the same with Elsa, who was adapted from Hans Christian Andersen's The Snow Queen. 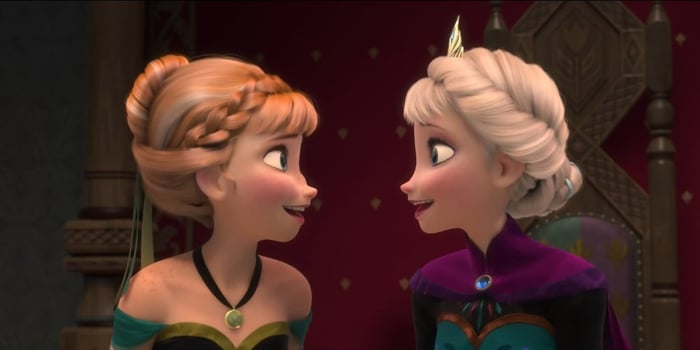 By setting Storybrooke up as a live-action parallel universe for its more memorable animated characters, Disney can use Once Upon a Time as a promotional platform for its animated films and vice versa. This is the same approach that Disney is taking with Star Wars: Rebels, the upcoming animated series that will serve as a prequel to the new Star Wars films.

The Frozen takeaway
In conclusion, Once Upon a Time's Frozen tie-in is a shining example of Disney doing what it does best -- effortlessly crossing one business segment's property into another to maximize exposure and profitability.

It's a simple concept that Disney's rivals can't grasp. Time Warner (NYSE:TWX), for example, has allowed its small screen DC heroes -- Green Arrow and Flash -- to inhabit a different world from big screen counterparts like Batman and Superman, crippling the ability of the CW (which is co-owned by CBS) to directly tie into Warner Bros.' films.

Once Upon a Time's Frozen crossover might seem ludicrous, but it's quite standard for a show that has already featured Red Riding Hood turning into a wolf and introduced Peter Pan as a villain. Simply put, it's a fun idea that could boost ABC's ad revenue, increase sales of Frozen DVDs, Blu-Rays, and albums, and strengthen Disney's cohesive connections between its film and TV universes.