There has been a lot of buzz lately about the legalization of gambling in Japan. If Japanese Prime Minister Shinzo Abe gets his way, a $40 billion annual gaming market could be open for business by the end of 2014. This prospect has gaming companies such as Melco Crown Entertainment (NASDAQ:MLCO), Las Vegas Sands (NYSE:LVS), MGM Resorts (NYSE:MGM), Wynn Resorts (NASDAQ:WYNN), and Caesar's Entertainment Group (NASDAQ:CZR) on the edge of their seats.

Abenomics
Now in his second year in office, Prime Minister Abe is looking to launch the third prong of his three-pronged attack on economic deflation in Japan. The first two prongs, fiscal stimulus and monetary easing, produced promising early results, but the implementation of a new sales tax in April has Japanese GDP growth projections turning negative once again this quarter.

Abe must now rely on the third prong of "Abenomics," a growth strategy that includes boosting tourism via new "integrated Japanese resorts." In other words, "casinos." With the Olympics coming to Tokyo in 2020, the availability of established gambling resorts for the massive influx of tourists could provide a much-needed shot in the arm for the Japanese economy. In fact, Hong Kong brokerage CLSA Ltd. estimates that gaming in Japan could be a $40 billion annual industry by 2025.

So what's the problem?
While Abe has most of his party on board with the idea of legalizing gambling, some stout opposition to the idea exists within the Diet (the Japanese parliament). Some feel that legalizing gambling would lead to widespread gambling addiction and organized crime.

But the fact of the matter is that the underground gambling world is already thriving in Japan. Casinos run by yakuza gangsters (the Japanese mafia) are flourishing throughout the country, often sharing locales with dingy clubs and massage parlors.

Many of these casinos operate by exploiting legal loopholes that allow people to win "prizes" by playing pachinko, entering lotteries, or betting on horse races. People can easily redeem these prizes for cash at kiosks that operate separately from the casinos.

The current Japanese gambling environment and the argument by Abe's opponents against gambling legalization is reminiscent of the alcohol Prohibition Era in the United States. During this period of prohibition, organized crime ran rampant throughout the country, providing Americans with access to vices that they could not obtain via legal means.

Is it worth a gamble?
The consensus on whether or not a gambling legalization bill will pass in Japan seems to change on a monthly basis. The stocks of Macau casino operators have taken a beating lately after recent news of a crackdown on money laundering in Macau and a slowdown in Macau's gaming growth. 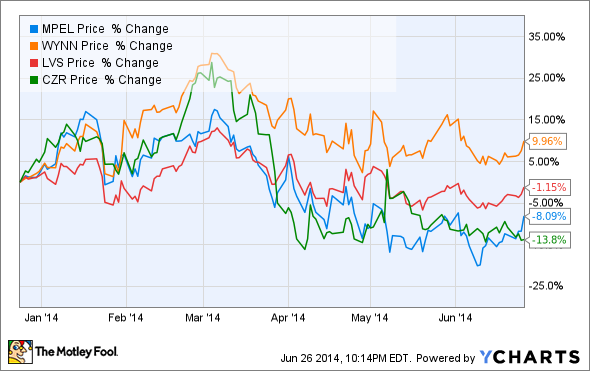 When the gambling bill was originally submitted in 2013, the consensus seemed to be that the bill would have enough support to pass. However, at the Japan Gaming Congress in May, pro-gambling politician Sakihito Ozawa admitted that the odds of the bill passing were down to about 50/50.

As recently as this week, Prime Minister Abe seemed convinced that the bill would pass by the end of 2014. In an interview on Tuesday Abe said, "I hope in my capacity as leader of the LDP that we can aim to pass it in the next extraordinary session of the Diet."

What can shareholders expect if the Japanese flood gates open?
If the prime minister's optimism is justified, casino operators will be lined up to set up shop in Japan.

Melco CEO Lawrence Ho pledged $5 billion toward Japanese expansion if the gambling bill passes. Japan could be an important element in Melco's recent efforts to expand outside of Macau for the first time by reaching into gaming markets in the Philippines and Russia.

By focusing on Macau, Las Vegas Sands was able to generate 49% year-over-year revenue growth in China in the first quarter of 2014. The company would likely seek to continue that robust growth in a wide-open Japanese market.

Since only only 37% of MGM's revenue comes from China, expansion into Japan could help increase MGM's exposure to the growing Asian gaming market and away from the slower-growing American market.  Wynn may see Japan as an opportunity to boost its lagging growth, as both its overall revenue growth and its Chinese revenue growth rates fell short of the growth rates of MGM and Las Vegas Sands in 2013. MGM and Wynn have both pledged to spend billions of dollars in the Japanese market.

Caesar's potentially has the most to gain from Japan. Caesar's CEO Garl Loveman recently said that the company would have "no trouble" financing a $5 billion Japanese resort.After selling its Macau property to pay down debt and losing a bid to open a property in South Korea, Caesar's desperately needs exposure to the Asian market.

In 2013, revenue from the Las Vegas Strip totaled $6.5 billion. If the projections of $40 billion annual gaming revenue in Japan are anywhere close to accurate, it's easy to see why these companies are so eager to get a piece of the action.