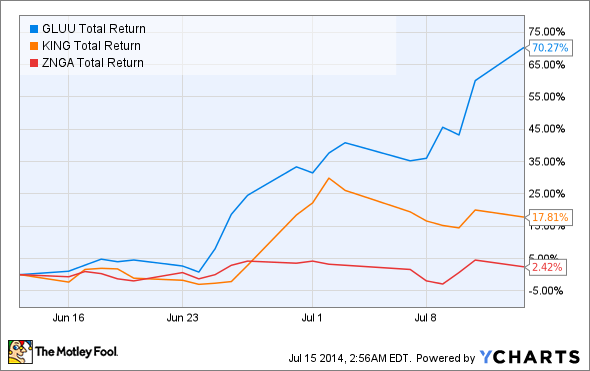 Glu Mobile's rally appears to be predicated almost entirely on the success of Kim Kardashian: Hollywood, a newly released, free-to-play mobile game. Clearly, investors have benefited from the game's success, but can Glu Mobile deliver over the long term?

Glu Mobile's impressive transition
As a company, Glu Mobile has been able to succeed where many of its competitors have failed, deftly navigating its business through a rapidly changing casual video game market.

It wasn't too long ago that Zynga and Rovio were riding high, profiting from the then-dominant trends of social and paid-for mobile games, respectively. But as social gave way to app-store downloads, and paid-for downloads lost ground to free-to-play games, both companies have fallen on hard times.

Zynga has been particularly rudderless in recent years, chasing fads like Draw Something and flirting with the prospect of legalized online gambling. Management changes have been too numerous to mention, and current CEO Don Mattrick is in the middle of an aggressive makeover. Shares have been volatile, but Zynga has largely been a disappointing investment -- the stock is down more than 9% over the last year, and 20% over the last three months, as the future of the company remains uncertain.

Glu Mobile, in contrast, in appears to have experienced a relatively flawless transition. Like Zynga and Rovio, Glu Mobile was once tied to a now-defunct business model: mobile games that had to be purchased. Late in 2010, it shifted its focus to free games, and today, it sells itself the "leader in 3D freemium mobile gaming."

Glu Mobile made the right bet. According to research firm App Annie, 98% of the income generated on Google Play (the official Android app store) during the month of May came from free-to-download apps (the majority of which were mobile games).

An investment in a growing trend
All of Glu Mobile's new titles, including the aforementioned Kim Kardashian: Hollywood, are now free-to-play, supported with in-app purchases. The flawless transition has been borne out in Glu Mobile's financials -- in the first quarter of the year, revenue rose more than 80% on an annual basis, and Glu Mobile posted a profit (it lost money in the same quarter last year).

Although Glu Mobile's results have been improving for several quarters, the recent rally appears to be based largely on the performance of Kim Kardashian: Hollywood. Currently, the game is number three on the iTunes free apps chart, and has remained near the top almost continuously since its debut on June 25. Cowen's Doug Creutz expects the game to generate as much as $200 million this year, which would be highly significant given that Glu Mobile had guided full year 2014 revenue of just $142 million-$150 million back in February.

But is Kim Kardashian: Hollywood a one hit wonder, or can the company continue to deliver even after the game fades from the limelight? This is a question that has plagued the broader casual game space in general, with King Digital often derided for its overwhelming reliance on Candy Crush Saga.

Free-to-play games remain a relatively new and speculative frontier, and like the paid-for apps and social games that preceded it, its success could be short lived.

Yet there's some evidence to suggest that these companies have staying power. Earlier this month, analysts at Piper Jaffray upgraded shares of King Digital to overweight, observing that -- in addition to Candy Crush Saga -- many of the company's other games were achieving top positions in the app chart, including Bubble Witch 2 and Farm Heroes Saga.

Glu remains speculative
The fact that two of the top three free apps were made by Glu Mobile is certainly impressive, and it's a testament to the company's management that it properly understood, and bet on, the dominant trends in mobile gaming years before free-to-play games became all encompassing.

Yet despite its recent success, and because of its outsized gains, Glu Mobile remains a highly speculative investment. Given its relatively market cap, it could offer shareholders greater rewards than Zynga and King Digital, but until its games can sit atop the app chart for more than a few weeks, this is a stock that belongs in only the most aggressive portfolios.