Based on a weighted average of 85 different indicators, the Chicago Fed Index provides an overall picture of our nation's economy. An above-zero reading denotes economic activity exceeding historical levels, while a negative number implies a historically underperforming economy.

Today's report has two bits of unwelcome news: May's index was revised down 0.05 points from 0.21 to 0.16, and June's reading pulls business activity down to 0.12. Still, both months remain above the historical average, which makes these latest reports better than below-average April.

From a longer-term perspective, the index's three-month moving average also took a dip, declining 0.15 points to 0.28. 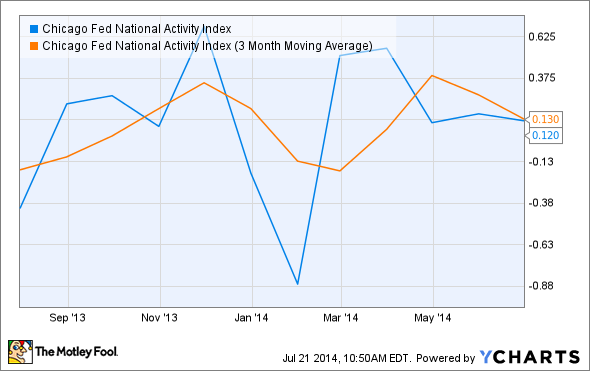 Consumption and housing (treated as one component) weakened the overall business activity index with a -0.14 contribution, but that's still slightly better than its -0.16 point pull in May.