Hibbett Sports (NASDAQ:HIBB) is a sporting goods retailer with an unique focus on small and mid-sized markets with populations under 75,000. It is much smaller than its larger peer Dick's Sporting Goods (NYSE:DKS), which is approximately seven times larger in terms of revenue. Despite its size (or lack of it), Hibbett's track record of profitability and growth is by no means inferior to that of its bigger competitor.

Hibbett has found that the best way to compete with big boys like Dick's Sporting Goods is to avoid them altogether. It operates in small towns which are already well-served by its presence; big-box sporting goods retailers will find it hard to steal market share and stay profitable in a small market. According to Hibbett's internal estimates, there is approximately 25% overlap between Hibbett's stores and its big-box competitors within a 10-mile radius. If the area is narrowed to a one-mile radius, the degree of overlap falls to just 6%.

More importantly, Hibbett employs a clustered store expansion program to ensure that it benefits from economies of scale like the big boys. By opening new stores primarily within two-hour driving distance of an existing Hibbett location, Hibbett can spread its distribution and advertising costs over a larger store footprint in any geographical area. For example, its vehicles can deliver goods to a greater number of stores on a per-trip basis, and a single advertisement in a local newspaper can reach more consumers with the same dollar spend.

Complementary product assortment
Not all big box retailers are competitors; the presence of Wal-Mart is actually positive for Hibbett. Approximately four in five Hibbett stores are located in strip centers, which are usually in the vicinity of a Wal-Mart store. Wal-Mart stores pull crowds so they bring significant foot traffic to Hibbett stores.

Hibbett benefits because its merchandise overlaps with that of Wal-Mart to a limited extent and its staff have superior sales knowledge. Firstly, its range of brand name sporting merchandise is superior to that of Wal-Mart, which results in cross-selling opportunities that target Wal-Mart shoppers.

Secondly, a significant number of these brand name sporting products are highly technical and customers typically require assistance with them from salespeople. For example, some customers will want to know if pressure sensors or shoe weight matter. In contrast, Wal-Mart's sales associates don't possess the same depth of sporting product knowledge because of the wide range of products they sell. 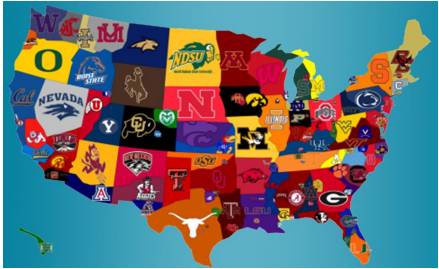 In contrast, Hibbett places a strong emphasis on localizing its products so it remains the favored retailer in local communities. For example, when there is a local school sporting event on the horizon, Hibbett will stock up on relevant merchandise in the school colors to capitalize on the demand. By tweaking its product line-up to leverage the local sporting calendar, Hibbett captures sales opportunities missed by the big boys.

Foolish final thoughts
Bigger isn't necessarily better. While Hibbett is smaller than Dick's Sporting Goods, it has matched its larger peer with respect to profitability and growth. It has wisely avoided competing with Dick's Sporting Goods directly while leveraging its symbiotic relationship with Wal-Mart. Hibbett's future growth prospects are validated by its plans to grow its current store footprint from 939 to over 1,500 in the mid-to-long term.