If you only paid attention to these numbers, then you might eliminate Wal-Mart as a potential investment. Fortunately, Wal-Mart has found a new growth avenue that might pique the interest of potential investors while striking fear into the dollar stores.

What went wrong?
Wal-Mart's target consumer is suffering for several reasons: a reduction in food stamp benefits, the end of the payroll tax holiday, and unemployment. The consumers that used to visit Wal-Mart once per week to stock up are more selective than they were in the past. Now there's little need for these consumers to visit an enormous retail store if they're more focused on essential needs. Many of these consumers are opting to shop at local dollar stores instead.

Thanks to their small size, dollar stores can fit in urban areas where Wal-Mart Supercenters don't have a large presence. Even in non-urban areas, dollar stores often offer more convenience to local shoppers. All that said, instead of crying about it, Wal-Mart has come up with a potential solution.

Go small or go home
The three big dollar stores are as follows: Dollar General (NYSE:DG), Family Dollar (NYSE:FDO.DL), and Dollar Tree (NASDAQ:DLTR). In regards to store counts, they have 11,215, 8,100, and 4,992 locations, respectively. Now consider how fast the dollar stores have grown their top lines compared to Wal-Mart over the past five years: 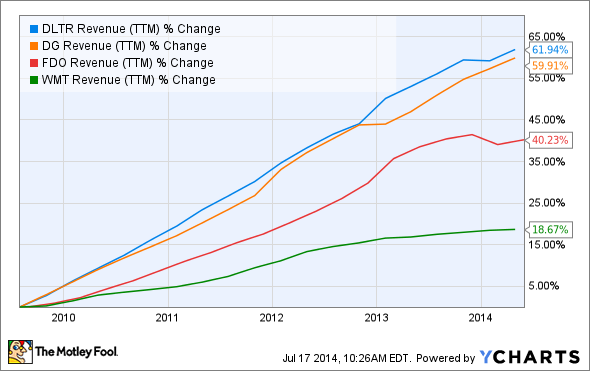 Wal-Mart is a more mature company, so this is somewhat expected. Keep in mind, though, that most retailers have had trouble delivering sustainable top-line growth over this time frame. This chart proves that the dollar stores have been in high demand.

To combat this rising threat, Wal-Mart has launched its Walmart Neighborhood Market and Walmart Express stores, which will simply be referred to as small-box stores.

As early as last fall, Wal-Mart planned on opening between 120 and 150 small-box stores in 2014. However, small-box store sales increased 4% for the 2013 holiday shopping season – a much different story from Wal-Mart's larger store formats. Logically, Wal-Mart altered its plan and announced that it would aim to open as many as 300 small-box stores throughout 2014. Neighborhood Market delivered a 5% comps gain in the first quarter, representing 46 consecutive quarters of comps growth. Looks like the small-box store format is heading in the right direction.

The Foolish bottom line
Small-box stores are a potential growth avenue for Wal-Mart. That being the case, Wal-Mart is likely to put a lot of capital toward this initiative over the next several years. This will lead to increased costs in the short term, but it should lead to long-term rewards. Wal-Mart has the most to gain, and the dollar stores have the most to lose.