Please ensure Javascript is enabled for purposes of website accessibility
Free Article Join Over 1 Million Premium Members And Get More In-Depth Stock Guidance and Research
By Matthew DiLallo - Jul 23, 2014 at 11:00AM

Delta is joining refining companies like Phillips 66 in replacing foreign oil with oil produced in the United States.

America's largest airline by market value, Delta Air Lines ( DAL 1.31% ), unveiled a plan to wean its refinery off foreign oil. Delta, which uses the refinery to produce some of its jet fuel as a cost-saving measure, signed an agreement that will supply a third of the plant's capacity with crude oil from the Bakken shale in North Dakota. It's just the latest move by an American refinery to process more of the oil produced here in the U.S.

The five-year contract calls for midstream specialist Bridger to supply Delta's refinery in Trainer, Pa., with 65,000 barrels of crude oil per day. It's part of the company's goal to source a minimum of 70,000 barrels of oil a day from domestic sources. This agreement represents a third of the plant's capacity and will cut into the 140,000 barrels of oil per day that Delta had been importing from Nigeria and Norway.

Delta's oil will come from the Bakken shale by rail. In order to make that happen Bridger is spending $200 million to acquire 1,300 new railcars that exceed current safety specifications to bring the oil into a Eddystone, Pa., rail terminal owned by Enbridge ( ENB 2.32% ). The crude oil will be loaded onto barges at Enbridge's terminal for shipment to Delta's refinery. The airline could eventually have a pipeline built from Enbridge's terminal to its refinery to eliminate the need for the barges.

Why Delta is making this move
Delta wants to save money on crude oil so that it can turn its refinery into a profitable operation. The refinery lost $41 million in the last quarter, though it did book $107 million in fuel hedging gains. However, this refinery has always had issues with profitability. It was previously owned by ConocoPhillips, which closed the facility in 2011 due to poor economics. As part of its restructuring, ConocoPhillips sold the plant to Delta and then spun off the rest of its refining assets into Phillips 66 ( PSX 2.60% ).

Phillips 66 has done well since becoming an independent company. Its stock price has surged 116% as the company has focused on taking advantage of cheap domestic crude oil. Like Delta, Phillips 66 is using rail and barges to move cheaper domestic crude oil to its refiners, as the map on the following slide shows. 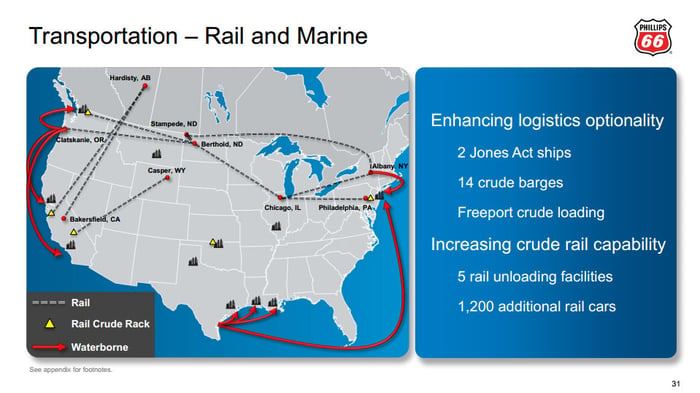 By enhancing its logistics options, the company is able to get more domestically produced crude oil to its refineries. In fact, Phillips 66 expects that these moves will move its refineries off of oil that is priced at the higher global benchmark Brent price by 2016. That's a big deal for the company because foreign oil priced off of Brent sells for nearly $5 more per barrel. The savings improve the company's profitability, as Phillips 66 can see $450 million in additional net income for every $1 it can save on a barrel of oil across its refineries.

Investor takeaway
Delta's move to wean itself off of foreign oil should have a noticeable impact as well. By saving a couple dollars per barrel of oil, spread across the 70,000 barrels per day of domestic oil it plans to process, Delta should be able to return the Trainer refinery to profitability. Furthermore, jet fuel is the company's top expense, so lowering the cost of that fuel by bringing down the expense of the oil used to make it should improve the company's overall profitability.