With the Marcellus and Utica shales estimated to hold as much as 480 trillion cubic feet of gas and the Permian Basin estimated to hold 75 billion barrels of recoverable crude, it's easy to see why investors might be getting excited.

However, many investors may be unaware of the sheer magnitude of North America's oil reserves:

To put North America's 5.6 trillion barrels of total oil reserves in perspective, it's estimated that all the oil ever produced totals just 1.1 trillion barrels.
Obviously not all of this oil will be produced, due to technological limitations, environmental concerns, and economic feasibility. However, the opportunity for long-term profit is staggering, and this article points out three investments poised to benefit from one of the largest energy booms in history.
Pembina Pipeline Corporation (NYSE:PBA) is a $14 billion Canadian midstream company that has been experiencing strong growth in both cash flows and operating margins over the last decade. For example, since 2004 Pembina Pipeline has grown adjusted cash flows/share by 10% annually, 15% annually since 2011. Meanwhile operating margins have been growing by 21% annually over the last 10 years.
In 2012, Pembina paid $3.1 billion in stock to buy NGL (natural gas liquids) extractor Provident.
Since then Pembina Pipeline has been hard at work integrating and expanding its growing base of assets and projects. Since 2011 Pembina has grown its project backlog from $4.5 billion to $7.3 billion and has secured $3.5 billion in new commitments. This impressive growth has occurred while Pembina strengthened its balance sheet, reducing debt/EBITDA (earnings before interest, taxes, depreciation, and amortization) from 3.75 to 2.8, and lowered its payout ratio from 88% to 68%.
Pembina is hoping to double its operating margins by 2016 and Pembina's last quarterly earnings revealed the company is well on its way to this goal. For example, crude oil, gas service, and overall midstream operating margins were up 21%, 53%, and 63% respectively. Combined with oil volumes up 12% and gas volumes up 77%, Pembina was able to grow its adjusted EBITDA by 50% compared to Q1 2013. 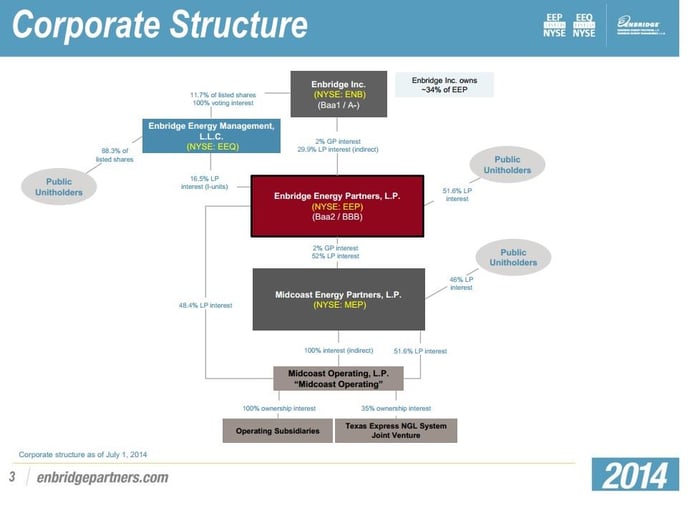