The first quote that comes to mind when considering one particular big risk surrounding Ford (NYSE:F) as an investment is, "Do not count your chickens before they are hatched." Until its most recent quarter, the automaker hadn't been profitable in Europe for years. Investors are already banking on Ford meeting management's goal of breaking even on the continent in 2015 -- but what if it doesn't? Let's take a quick look at the good, the bad, and the ugly in Europe right now, and why counting our chickens before they hatch could be a big problem.

Unemployment and overcapacity
Here's what investors know when it comes to Europe. Unemployment is still a major concern, especially in southern countries. Consider that Spain and Greece both have unemployment levels near 25%. The only thing investors are guaranteed is that another downturn, another recession, will inevitably take place in economies across the world. As that unavoidable economic slowdown inches closer to becoming a reality, regardless of when it happens, unemployment levels that high in Europe gets more worrisome for companies like Ford.

"You know there's another economic shock out there somewhere, and clearly Europe has not recovered as an economy as fast as other parts of the world," said Stephen Odell, Ford of Europe president, according to Automotive News. "There's still much debate on how to address the unemployment situation."

In addition to high unemployment levels and slowly recovering vehicle sales, the auto industry as a whole in Europe still has too much production capacity. Odell told Automotive News he believes Europe is a market with 20 million units of production capacity and is struggling to sell 14 million vehicles. 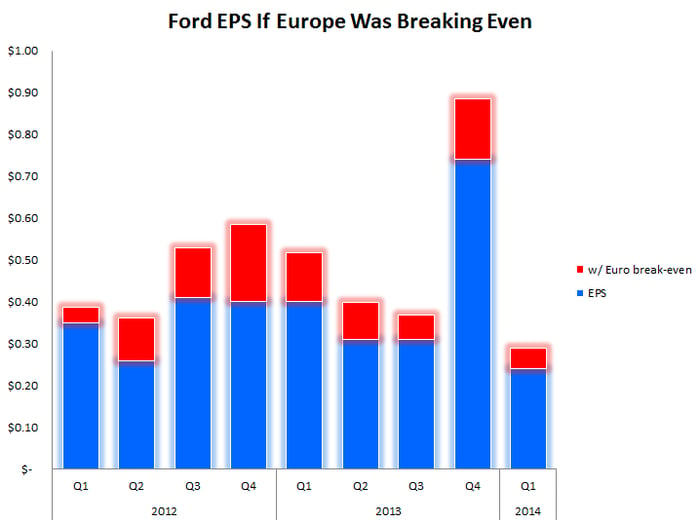 Calculated as quarterly fully diluted EPS, divided by basic shares outstanding for the most recent quarter.

Ford has lost more net income in Europe since 2012 than it has spent on dividends since the payouts were reinstated. When Ford breaks even in Europe, it could effectively afford to double its dividend without breaking a sweat.

However, if Europe struggles to bring its unemployment down or the region slips into an unforeseen recession, it could bring billions of losses right back to Ford and other automakers' bottom-line profits. Still, while investors shouldn't count chickens before they hatch, there is reason to be optimistic regarding Ford's operations in Europe.

The upshot
Fortunately for investors, the auto industry's production overcapcity isn't indicative of Ford's situation. The company took quick and decisive action to close two factories in the U.K. in 2013 and is closing its Genk, Belgium, factory this year, which will reduce the automaker's annual production capacity by 350,000 units. Ford will take charges between $400 million and $500 million for the latter by year's end, and that should mark the end of expensive charges from operations in Europe.

Shrinking overhead and reduced costs will enable each vehicle rolling off the assembly line to generate more profit. That's especially true if Ford continues to improve its sales mix to focus on more retail and fleet sales, rather than on daily rental or registration. Just last month Ford's retail and fleet sales accounted for 73% of its total sales in Europe; that's 300 basis points better than June 2013 and 500 basis points better than the current industry average.

Retail and fleet sales also will typically generate higher transaction prices if the vehicle is new. During the first half of 2014 Ford's sales in Europe were up 6%, and more than 52% of those sales were all-new or significantly refreshed vehicles -- a more profitable retail situation.

Better yet, Ford recently noted that dealership profits in Europe were up 50% through June, compared to the first six months of 2013, which will enable dealers to fund much-needed upgrades for remodels or other business aspects. With updated dealerships luring in incremental foot traffic, the entire sales scenario becomes a virtuous cycle.

With the understanding that retail sales are the most profitable, which is especially true with new models, what if Ford had another trick up its sleeve? It just might: Ford plans to introduce a new premium trim in Europe, rather than launch its struggling Lincoln luxury brand on the continent. Ford calls it Vignale and plans to price the trim, which will own features typically seen in luxury models, at a 10% premium to even its Titanium trim.

Foolish takeaway
It's risky to bank on Europe's slow recovery to send Ford's earnings surging in the years ahead. With that said, Ford's prospects for accelerated profitability in Europe, if all stays on course, are definitely looking up.