Sales of Chrysler's Ram pickup line are up 19% so far this year. But a change in strategy could trim Chrysler's gains soon. Source: Fiat Chrysler.

Could a decline in Fiat Chrysler's (NASDAQOTH: FIATY) earnings because of problems in Latin America spell trouble for Ram pickup sales in America?

Let's start with the big picture. Fiat Chrysler reported a sharp decline in second-quarter earnings on Wednesday as economic weakness in Latin America offset improved performance in Europe and Asia.

FCA reported a net profit of 197 million euros ($264 million) for the quarter, a sharp drop from the 435 million euro profit it reported in the year-ago quarter. It also fell far short of the Wall Street consensus estimate of 282 million euros, as reported by Reuters.

So, what do FCA's Latin America troubles have to do with Ram pickups? Read on.

FCA needs to make more money in North America, now
Although Fiat shareholders officially voted to approve the merger on Friday, and there's still some paperwork to be done before it's really official, Fiat and Chrysler have effectively been run as one company for a while.

That means CEO Sergio Marchionne takes a global view of his entire organization. And while he has to like the sales growth he has seen from the company's operations in North America -- sales were up 7% in the second quarter -- the profits it has been making aren't as solid as he would like.

Just as we've seen at rival Ford (NYSE:F), where strong North America profits have carried the Blue Oval while it restructures in Europe and expands aggressively in Asia, profits at Fiat Chrysler's North American division -- essentially, the Chrysler Group -- have helped it withstand the severe challenges faced by the Fiat side of the business in Europe and Latin America.

But even though sales in North America were up, FCA's profits in the region were down 18% in the quarter.

Why? Because Chrysler has been winning big sales gains with discounts. But FCA needs profits more than sales because of its problems elsewhere in the world.

So now, the boss wants to cut those discounts way back.

Sales are up while profits are down? Here's why.
Ram pickups are Chrysler's best-selling product in the U.S., and Ram sales have been great: up 20% in the first half of 2014, versus a 1.1% gain for General Motors' (NYSE:GM) Chevy Silverado and GMC Sierra twins, and a 0.5% decline for Ford's F-Series line.

But profits haven't been great, because Chrysler has been winning those sales (and others) with big incentives. According to data from TrueCar, Chrysler's average incentive payout has risen past those of its Detroit rivals over the last few months. (The three Detroit automakers tend to pay higher average incentives than other manufacturers because of their big sales of full-size pickups. Big payouts are typical in that market segment, where the average payment often exceeds $4,000 -- but despite the payouts, pickups are among Detroit's most profitable products.) 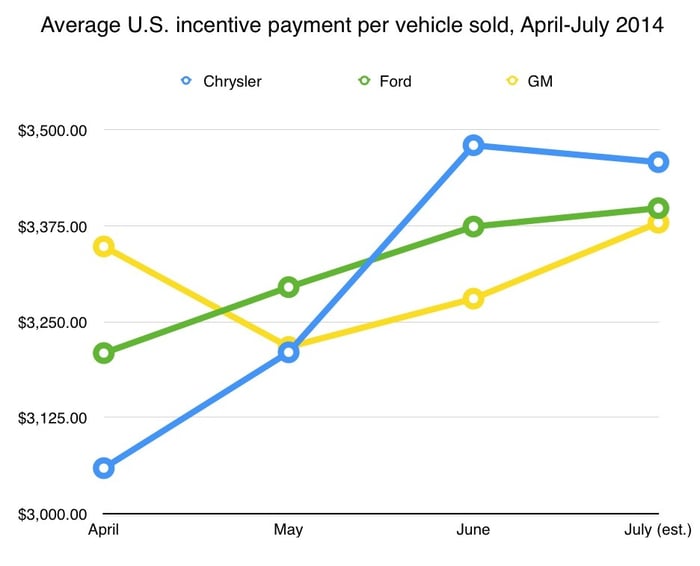 Data provided by TrueCar shows each manufacturer's average incentive payment per vehicle in the U.S. for the specified month. July numbers are TrueCar estimates.

In a conference call for analysts following Wednesday's earnings report, Marchionne and CFO Richard Palmer were both clear: Profit margins in North America have to improve in the second half of the year, and to get that improvement, incentives and discounted leases in North America could well be rolled back.

That could bring Ram sales back to earth in a hurry.

Why GM could be the big winner here
Ford isn't in a position to pick up (so to speak) a lot of truck sales right now. The Blue Oval is winding down production of its current F-150 before the launch of its all-new 2015 model late this year, and supplies of its mainstay pickup are expected to be tight as the year goes on.

But General Motors, with ample supplies of its new-for-2014 pickups on hand, could be in a position to steal back the market share it has lost to the Ram over the last year. GM has tried to be conservative with its pickup incentives in an effort to boost its own profit margins in North America.

That effort has paid off for GM so far -- but a cutback by Chrysler could spur the General to try to make a big move. Stay tuned.