Sales of Subaru's Forester SUV have been white-hot since the all-new model rolled out last spring. Forester sales were up 47% last month. Source: Subaru.

SUV sales are booming, and some commentators have suggested that the industry is headed for another crisis.

But there are good reasons to think those concerns are wildly overblown. For starters, this time around, Detroit hasn't neglected its small-car lineups. For another, the SUVs that are seeing booming sales aren't just big trucks from Detroit.

Nearly all of the major automakers are reaping the benefits of this market shift -- including one brand prized by fans for (among other things) fuel efficiency: Subaru.

Those gains have (mostly) been driven by the new wave of "crossover" SUVs, all-wheel-drive capable vehicles built on platforms shared with car models. But the company that helped pioneer the "crossover" idea hasn't been left out of the fun.

In a way, Subaru's recent success is more good evidence that this new SUV boom isn't like the last one.

Subaru's hot seller at the moment is the Forester, a small crossover SUV that was all-new last spring. That new version got strong reviews from the likes of Consumer Reports, and it has proven to be very popular with buyers.

Forester sales long trailed those of the Outback, but as you can see, as the all-new Forester started arriving at dealers in the first half of 2013, sales surged. 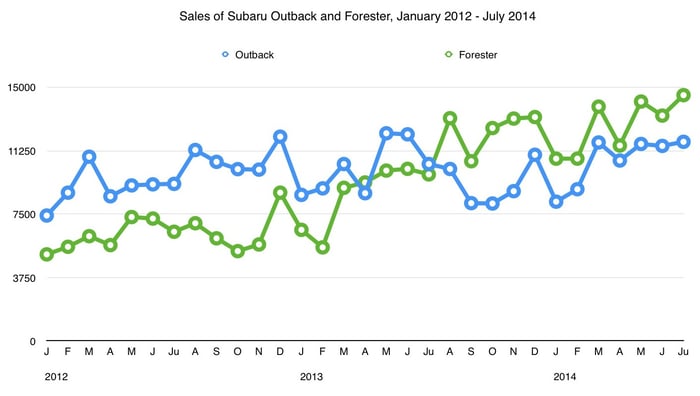 That surge has continued into 2014. Year-to-date sales of the Forester are up almost 47%, a huge jump for a product that has always been among the brand's more popular models.

But the Forester isn't Subaru's only hit right now. Dealers now have good supplies of the all-new Legacy sedan, and sales were up almost 49% in July -- even though the 2015 Legacy's marketing campaign is just beginning.

The all-new 2015 Subaru Outback is now rolling out around the country. Expect strong Outback sales to drive more gains for Subaru in the second half of the year. Source: Subaru.

The Legacy's sibling, the ever-popular Outback wagon, is also all-new for 2015. It's just now starting to arrive at dealers in quantity. Outback sales were up 12% in July. Will its gains increase as the year goes on?

The 2015 Outback should drive more gains as the year goes on
The Outback -- essentially, a Legacy wagon with added off-road capability -- was one of the first "crossover" vehicles to find a big market. It has been among Subaru's best-sellers for most of the last two decades, and the company has big expectations for the all-new model.

The old Outback's sales growth slowed a bit after the all-new Forester made its debut last spring, suggesting that the new model was stealing some sales from its sibling. How will the Forester fare alongside the all-new Outback? It'll be interesting to see.

But Subaru is certainly going to put some marketing muscle behind its new crossover. Earlier this year, Yasuyuki Yoshinaga, CEO of Subaru parent Fuji Heavy Industry (OTC:FUJHY), came to New York to explain why the Outback is key to Subaru's efforts in the U.S.

Right now, Subaru's marketing is focused on the all-new Legacy. But I think it's a safe bet that we'll see a big marketing push for the Outback this fall. Will sales follow? Stay tuned.