In seven short years, Ubisoft's (OTC:UBSFF) Assassin's Creed has established itself as a blockbuster gaming franchise that has sold nearly 60 million copies over the course of six main games.

Therefore, it's not surprising that Fox (NASDAQ:FOX) will launch a new film based on the game, tentatively scheduled for August 2015. Not much is known about the film, except that it will star Michael Fassbender and be directed by Justin Hurzel. While it makes perfect sense to launch a film franchise on the back of the hit video game series, film audiences have been fed plenty of terrible video game adaptations in the past. 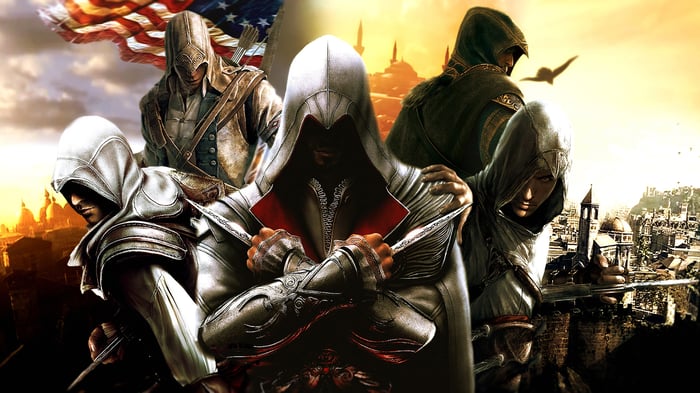 Will the new Assassin's Creed film fare any better than Street Fighter, Resident Evil, Prince of Persia, or Need for Speed? And more important, can Fox and Ubisoft work together to make this film a blockbuster series that could complement the video game series and become a cross-media gold mine for both companies?

Let's do the math on Assassin's Creed so far. With nearly 60 million games sold at about $50 each, the franchise is already worth roughly $3 billion. But the problem is that sales are stagnant.

If Ubisoft wants Rogue, Unity, and future Assassin's Creed games to generate sales like Activision Blizzard's Call of Duty: Ghosts, at 22 million, or Take-Two's GTA V, at 36 million, it needs a fresh way to promote the games -- like a companion film series.

The business of video game movies
Video game adaptations usually fall into two categories -- those that have nothing to do with the game, or those that try too hard to remain loyal to flimsy source material. These films haven't fared well with critics, although some -- like Mortal Kombat, Tomb Raider, and Resident Evil -- have been highly profitable.

The problem is that writers and directors often approach video game movies with the idea that they must expand a game's flimsy premise into a full-length film. That's certainly true for games like Super Mario Bros., Street Fighter, or Need for Speed, but games like Assassin's Creed or Metal Gear Solid have rich enough plots to be comfortably adapted into serious films.

Why Assassin's Creed could be the first great video game film
The Assassin's Creed games have already followed the Assassins' Order through the Third Crusade, Renaissance Italy, the Golden Age of Piracy, and the American Revolution. That could be a great foundation for a highly entertaining series of films, similar to Disney's Pirates of the Caribbean.

Ubisoft will maintain full creative control of the film, which guarantees that the film will remain fairly loyal to the games. The company has already made mini-films for Assassin's Creed in the past. Ubisoft released Lineage, a series of three live-action films promoting Assassin's Creed II, in 2009. Although the budget limitations in Lineage were obvious, it was a solid, serious demonstration of Ubisoft's artistic vision of the game as a film.

Ubisoft also released Assassin's Creed: Embers in 2011, an animated short film that served as an epilogue for the "Ezio trilogy" -- Assassin's Creed II, Brotherhood, and Revelations -- which depicted Ezio's last days. In addition to expanding the Assassin's Creed storyline, both Lineage and Embers demonstrated how Ubisoft could tell the story across two mediums.

If Fox and Ubisoft work closely on the film, it could serve as a seamless promotion for the games, while the games would promote the film.

The Foolish takeaway
Assassin's Creed could be a great opportunity for Ubisoft to expand its world of assassins beyond the games, novelizations, and companion comics. If the film is a hit and evolves into a franchise, sales of future games could surge. More important, video game fans would finally get the respectable video game adaptation that they have waited two decades to see.

Could the ‘Assassin’s Creed’ Movie Turn the Game Into a Cross-Media Goldmine? @themotleyfool #stocks $UBSFF $FOX Next Article
Current