These days, it's popular to claim that Nintendo (OTC:NTDOY) is "out of lives" and doomed to fail.

Analysts always offer Nintendo the same tired suggestions: launch mobile games, charge more in-game microtransactions, or become a software-only company. Yet many of them overlook the growth potential of Amiibos, Nintendo's interactive figurines, which can store and ferry player data between multiple games.

Nintendo first introduced Amiibos at E3 in June. The first set, which includes classic characters like Mario, Link, Kirby, and Donkey Kong, will be released alongside Super Smash Bros. for Wii U during the holiday season this year. They will also be compatible with Super Smash Bros. for 3DS, Mario Kart 8, Mario Party 10, Captain Toad: Treasure Tracker, and Yoshi's Woolly World.

Nintendo isn't the first company to launch interactive toys that "magically" enter the game through NFC (near field communication) chips -- Activision Blizzard (NASDAQ:ATVI) released Skylanders nearly three years ago, while Disney launched its Infinity figurines last August. However, I believe that Nintendo's Amiibos are so appealing that they could easily become a fresh source of revenue for the company.

Why Amiibos could be the next Skylanders
Activision's Skylanders has been one of the company's most successful new products. Back in May, the company revealed that the franchise had generated $2 billion in revenue in less than three years.

Nintendo's flagship characters are arguably more appealing than the Skylanders characters. Whereas younger gamers might recognize Skylanders like Drobot, Zap, and Sonic Boom, it could be tough for older gamers to resist buying collectible figurines of Link, Samus, and Kid Icarus. Nintendo is relying on those pangs of nostalgia to sell Amiibos, since the average gamer is now 31 years old, according to the Entertainment Software Association.

Nintendo's Amiibos are also slightly easier to use. To play with Activision's Skylanders, players must purchase an additional "Portal of Power" peripheral, which costs around $10, for the figures to stand on. Amiibo owners can simply put the figurine on the Wii U GamePad to transfer the character data into the game. 3DS owners, however, will still require an additional peripheral for data transfer.

Why Skylanders was a hit
While customers might enjoy collecting Amiibos, Nintendo has to understand why Skylanders made so much money for Activision.

To get gamers hooked, Activision sells "starter packs," which include a Portal of Power, a few figurines, and the video game. These starter packs generally cost around $60. The figurines are imbued with different elements and powers, which help the player progress through certain parts of the game. However, certain areas cannot be accessed unless the player has a Skylander with the correct power -- which means that additional figurines must be purchased to achieve 100% completion. Kotaku estimated that it would cost at least $225 to experience everything in Spyro's Adventure, the first game of the Skylanders series.

Locking away areas of a game sounds a lot like in-game microtransactions, but Activision smooths things over by selling collectible toys. It's a brilliant way to enhance a digital product's value with a physical item.

But can Nintendo get greedy enough?
But the problem is that Activision's strategy simply isn't Nintendo's style.

Back in February, Nintendo refused to nickel-and-dime gamers in Rusty's Real Deal Baseball and Steel Diver: Sub Wars for the 3DS, much to the chagrin of investors. Investors wanted Nintendo to add in-game purchases, but Nintendo merely offered gamers a single option to upgrade the free-to-play version to the full game.

For Amiibo sales to hit Skylander levels, Nintendo has to mimic Activision by aggressively locking away parts of its games for certain Amiibos to access. For Super Smash Bros., that could mean adding Amiibo-only characters who have certain advantages over the game's default characters. For Captain Toad: Treasure Tracker, putting Amiibos on the GamePad could summon in-game characters to help Toad reach inaccessible areas. 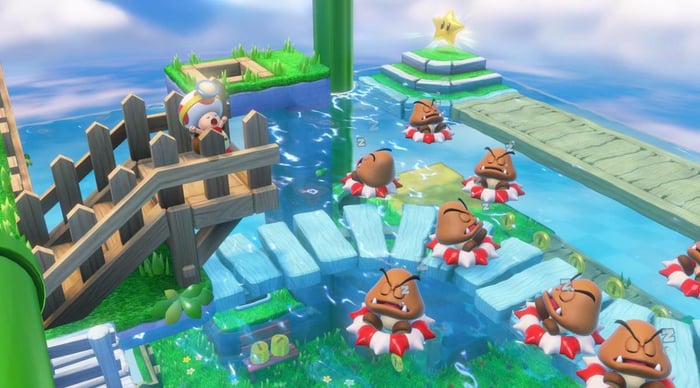 If Nintendo gets clever enough with these Amiibo tricks, it could double or triple revenue from a single game through Amiibo purchases. That would easily offset weakness in Wii U and 3DS game sales, and possibly help Nintendo return to profitability.

A Foolish final word
If Nintendo wants Amiibos to be the next big thing, it needs to push harder in marketing and promotions, and clarify how Amiibos will be used in upcoming games. It could also start selling Amiibos now, before the games arrive, to generate positive buzz among nostalgic toy collectors.

In addition to fresh revenue, Amiibos could generate much needed attention for the Wii U, which is relying heavily on upcoming exclusive titles like Hyrule Warriors, Super Smash Bros., Bayonetta 2, and The Legend of Zelda for Wii U to help it stage a late comeback against Sony's market-leading PS4.