Before you invest in the soft drink industry, read this first.

There are few industries that have reached the same level of cultural significance as the soft drink industry. Its beverages inspire lifelong allegiance from customers. And the terms we use to describe those beverages -- like "pop," "Coke," and "soda" -- go a long way in defining where we're from and how we talk.

There's no question we all know the products inside and out, but here are some key things investors need to know about the industry itself.

What is the soft drink industry?

The soft drink industry consists of companies that develop, manufacture, and market carbonated beverages. Coca-Cola (KO 2.34%) and Pepsi (PEP 1.64%) are the two obvious heavyweights in this arena, but Dr. Pepper Snapple (DPS) holds a not-so-trivial 15% of the American market as well: 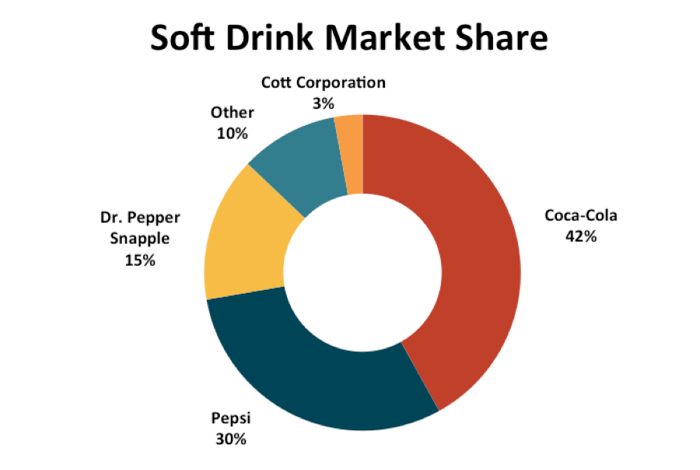 Beyond your everyday vending machine brands, each of these major companies owns a vast drink portfolio. Coke, for instance, is home to more than 500 different brands (including still and carbonated). The successful marketing of these brands is critical for companies looking to steal market share in an industry that's showing lackluster growth in recent years.

The chart below reveals a few examples of who owns what in the soft drink industry:

How big is the soft drink industry?

In America, the soft drink industry generates $28 billion in annual revenue according to research from IBIS World. As mentioned before, however, this is an industry that's experiencing a steady decline in volumes with each passing year.

Since 1998, per capita soda consumption in America has fallen from its peak of 864 eight-ounce servings to 675 servings in 2013. That represents a drop of 22%, driven by a dramatic shift in consumer preferences. In the U.S. at least, consumers are opting for everything from juice beverages to coffee to energy drinks as an alternative to heavily sweetened sodas.

Of course, this downward trend hasn't hit major beverage companies as hard as you might expect. For one, they have tapped into a much larger global market that also includes distributing and selling bottled water. And that offers a much bigger glass to fill: The global nonalcoholic beverage market is roughly nine times the size of the U.S. soft drink industry, raking in $247 billion in total revenue.

How does the soft drink industry work?

An evaluation of the soft drink industry is often used as a primer for beginning investors. After all, there aren't many other industries where even a 7-year-old could name the top-selling products without a minute of research.

But as straightforward as the products are, the industry dynamics introduce plenty of complexity. For instance, a thorough analysis would require an evaluation of each segment of the soft drink value chain, from the research and development process all the way to consumers' taste bud preferences. Here's what those segments look like in sequential order:

The trend in recent history has been for the largest beverage companies to have complete control over their products through every step of this chain. In industry parlance, this is referred to as "vertical integration."

Vertical integration allows companies like Coca-Cola and Pepsi to have greater visibility and flexibility in all aspects of their business. In addition, it provides each with considerable bargaining power relative to smaller players.

The more concentrated the industry becomes at all stages, the higher the barriers to entry are for upstart competitors. While it's easy in theory to create a great-tasting beverage in your kitchen and build a small audience, it's another thing to scale production, distribute regionally, or market that beverage on the national stage. Hence, many fast-growing brands like vitaminwater, Honest Tea, and Monster Beverage (MNST 2.04%) eventually partner up with the big players or get acquired.

What are the drivers of the soft drink industry?

With American soda consumption in decline, most of the major companies are driving their businesses in a slightly different direction instead of praying for a turnaround.

Pepsi's busy building a snack food empire and Coca-Cola has its eye on international growth in particular. Neither company's ignoring their core market, of course, but it's unclear whether innovation in soft drink recipes will light a fire under their businesses. As my colleague Ted Cooper argues, we probably shouldn't expect Coke's new stevia-and-sugar-sweetened soda, Coke Life, to set the world on fire anytime soon.

Instead, there are interesting developments taking place on the fringes. First off, Coke's betting that energy drinks -- a close relative to soda -- will continue their ascent in the years to come. Coke recently purchased a 16.7% equity stake in the energy drink specialist Monster Beverage for $2.15 billion in cash, a tie-up that will allow for more seamless distribution of Monster's products in international markets.

Further, Pepsi is test-driving new direct-to-consumer methods like its countertop unit known as Pepsi Spire, a response to Coke's Freestyle system. Both allow users to help themselves to thousands of drink flavors in restaurants, movie theaters, and other public establishments. The Spire could be Pepsi's first step toward an at-home soda market that Coca-Cola plans to disrupt with Keurig Green Mountain (GMCR.DL) in the near future.

Finally, as Americans have curbed soda consumption, they haven't abandoned sparkling drinks altogether: Carbonated water -- flavored or not -- is on the rise. According to IBISWorld, Dr. Pepper Snapple's Canada Dry brand was the only one of its five core drinks to achieve volume growth during the past half-decade, in part due to "unsweetened variants such as plain and tonic water." Expect Dr. Pepper and its rivals to increase their focus on a sparkling water category that's posting growth rates of 16.3% and 34% in 2011 and 2012, respectively.

Enthusiasm for traditional soft drinks isn't exactly bubbling over, but this industry's not going anywhere either. The biggest players have diversified their businesses enough to offer the potential for growth in international markets, still beverages, or snack foods. Meanwhile, companies like SodaStream (SODA) are finding ways to change the distribution picture and offer greater customization to consumers of carbonated beverages.

Slowly but surely, the industry is changing its shape. And even to investors that love boring businesses -- like Warren Buffett -- that's a good thing. As he pointed out to Coke's CEO last year, "You want a restlessness, a feeling that somebody's always after you, but you're going to stay ahead."