It's OK if you want to invest like this guy; we do, too.

Anyone that wants to be taken seriously as an investor wants to be like Warren Buffett. We like to track every move that he makes in the portfolio of Berkshire Hathaway (NYSE:BRK.A) (NYSE:BRK.B) to see what companies he and his partners think will provide long-term returns that crush the market. Since the beginning of last year, Berkshire has made two major additions to his portfolio in the energy industry -- ExxonMobil (NYSE:XOM) and Suncor Energy (NYSE:SU) -- and has also added significantly to his position in one other -- National Oilwell Varco (NYSE:NOV).

On the surface, they look like pretty different companies. You have the largest integrated oil and gas company, a specialist in the Canadian oil sands business, and an oil and gas equipment and services supplier that has a corner on building drill rigs and related equipment. However, there is one distinct trait that all of these companies share, and it's what makes them all so appealing as investments. Let's take a look at what these companies do that makes them so appealing to Mr. Buffett and how you can use this knowledge in your own investing research.

Show me the money!!!
What makes these purchases so interesting is that while picking up shares in this company, Berkshire has been slowly unwinding a major position in a formerly integrated oil and gas company -- ConocoPhillips (NYSE:COP) -- that has since spun off its refining, chemicals, and transportation infrastructure into Phillips 66. Mr. Buffett has gone on record saying that purchasing ConocoPhillips when he did -- at the peak of oil and gas prices -- was a major mistake.

So, what exactly is it that makes ConocoPhillips that much less attractive than these other three companies? If you look at average performances since 2006, ConocoPhillips performs rather well, even when compared to both ExxonMobil and Suncor.

The big difference isn't the overall numbers, it's more about where each of these companies got those numbers. Much of ConocoPhillips' returns over the past few years have been from the sale of property and other assets, while ExxonMobil, Suncor, and National Oilwell Varco have all generated free cash flow and overall returns organically from their continuing operations. The best way to show this is to look at all of these companies' cash from operations as a percentage of capital expenditures over the past several years.

If you were wondering what common thread the Berkshire Hathaway energy companies have that make them so appealing, I think I may have just given it away in that table. It all comes down to generating fat stacks of cash from continuing operations.

It's not just that these companies are really good at generating free cash flow from continuing operations, it's that they are the best at it in their respective realms. Just take a look at these two charts from Suncor and ExxonMobil--both show the two companies strength in generating cash from operations. 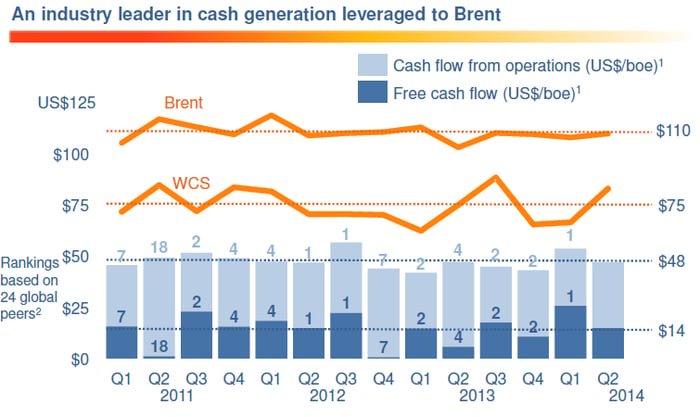 The same can be said for National Oilwell Varco. Compared to its peers in oil services, it's not even close.

Putting that money to work
These large sums of excess cash give each company's management a lot to play with to enhance shareholder returns. In the case of ExxonMobil and Suncor, both are buying back huge chunks of their own shares. In the past three years, Suncor and ExxonMobil have reduced overall share counts by 6.66% and 11%, respectively, on top of them both paying dividends with yields in excess of 2.5%. 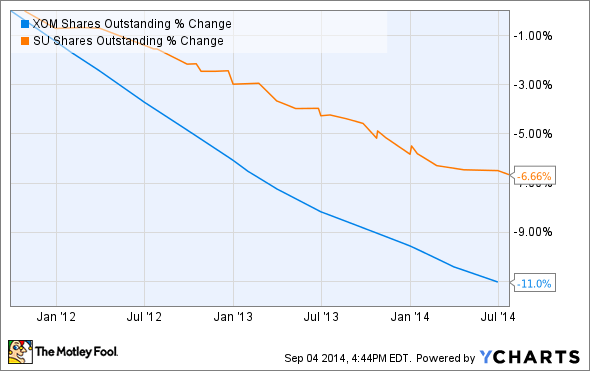 National Oilwell Varco, on the other hand, has taken a slightly different approach, but arguably it has been just as effective. Management at NOV has slowly, steadily been growing its market share in the oil equipment manufacturing business through loads of strategic acquisitions. In the past 12 years, the company has closed on over 300 acquisitions that have allowed the company to capture more than 80% of the market share in certain segments of the equipment business. These acquisitions, not surprisingly, have simply kept the cash engine growing and allowed management to boost its dividend payment by 70% this year without even batting an eye.

What a Fool believes
I can't say with 100% certainty that the ability of these three companies to generate free cash from operations is the tell tale sign that brought them and Berkshire Hathaway together. After all, there is no Being John Malkovich-type door into Warren Buffett's head (admit it--you just said "wouldn't that be cool" to yourself after reading that). Still, these numbers make a pretty convincing argument for why Berkshire put them on the buy list.

Investing in the energy space is a unique beast. Companies that produce oil and gas need to spend gobs of money to keep production going, and all of them are influenced one way or another by the whims of oil price swings. However, if you are looking to find better investments in this industry, finding those that generate superior amounts of free cash from continuing operations is a great place to start. Who knows, perhaps you might find the next Berkshire Hathaway purchase before hand.