Gilead Sciences (NASDAQ:GILD) stock has been on a roll so far this year. Shares in the company's stock have returned 40% this year, outpacing both the S&P 500 index's 10% return and the Nasdaq Biotechnology index's 19% return.

That's an impressive performance, particularly for a company boasting a market cap of over $160 billion. So what's the reason behind Gilead Sciences' investor-friendly performance this year? Simple: over-delivering on already lofty expectations. 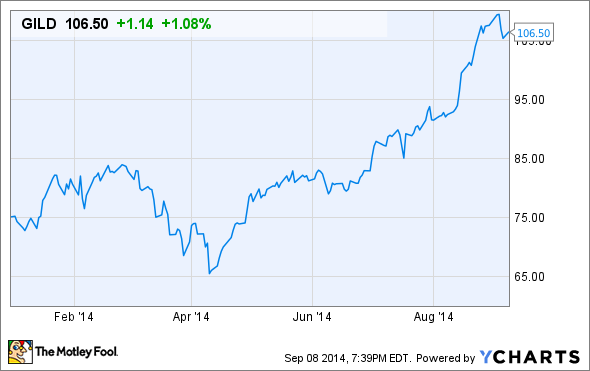 Setting the bar high(er)
No one doubted that Gilead's hepatitis C drug Sovaldi would be a big hit when it won FDA approval last December, but even the greatest optimists have probably been surprised at how significant a drug (and how much of a lightning rod) Sovaldi has become.

The drug's jaw-dropping $84,000 cost for a 12-week course of treatment caught everyone flat-footed, particularly given that just a week earlier Johnson & Johnson had rolled out a $67,000 price tag for its newly approved hepatitis C drug, Olysio.Sovaldi's price eclipsed the $50,000 price tag for prior-generation therapy Incivek and clocked in four times the price of a ribavirin and peginterferon combination that was the standard treatment for years, prompting a flurry of criticism over price gauging.

But it has proved a price worth paying. Incivek was a remarkable drug in its own right, but its 79% cure rate falls well short of Sovaldi's 90% success rate. And it's not even worth considering ribavirin and peginterferon as viable alternatives to Sovaldi, given their sub-50% cure rate, longer treatment protocol, and nasty side effects.

As a result, the question wasn't whether Sovaldi would become a billion-dollar blockbuster, but how many billions it would rake in. In the first quarter, Sovaldi sales eclipsed $2.2 billion, and in the second quarter, Sovaldi sales totaled $3.4 billion. That performance is good enough to threaten AbbVie's Humira for the tag of best-selling medicine on the planet.

No one-trick pony
Sovaldi's success is clearly a big reason for Gilead's returns this year, but its not the only reason.

Sales of Complera grew 59% to almost $300 million, and sales of Stribild jumped 171% from a year ago to $270 million year over year in the second quarter. That puts both of these drugs on pace to become billion-dollar therapies this year. If that happens, Gilead's HIV franchise will have five billion-dollar blockbuster drugs this year.

In addition to a slate of top-selling HIV drugs, Gilead notched an important win for its first cancer drug. Zydelig won FDA approval for chronic lymphocytic leukemia and indolent non-Hodgkin's lymphoma in July. Analysts think Zydelig could eventually generate a half billion in sales per year, and while Zydelig won't be the game-changer that Sovaldi is, it still launches Gilead into a new and important market for cancer drugs.

Fool-worthy final thoughts
Gilead's earnings per share outpaced analysts' estimates by 63% in the first quarter and 32% in the second quarter, prompting Wall Street to bump up its full-year earnings outlook from $6.22 to $8.01 per share over the past 90 days. Industry analysts are equally enthusiastic about next year, too. In the past three months, they've upped their earnings-per-share outlook from $7.72 to $9.36. That forward earnings forecast means that Gilead is trading at a forward P/E ratio of just over 11.

Since Celgene and Amgen trade at a forward P/E of 19 and 15, respectively, it would seem that despite Gilead's advance this year, there could be even more room to go higher. Having said that, there is one headwind investors should keep an eye on. Gilead's management admitted that some doctors may hold off on prescribing Sovaldi ahead of the potential approval of a new Sovaldi and ledipasvir combination drug that is under review at the FDA and may offer an even better cure rate. If that's the case, Gilead's breakneck sales pace may have slowed this summer.