This article highlights an unknown risk that threatens to destroy land vital to America's energy industry and which companies might be most affected.

Editor's note: A previous version of this article stated that Hurricane Katrina struck in 2007, when in fact the year was 2005. The Fool regrets the error.

There is an impending energy crisis looming that almost no one has heard of, but could have dire consequences for America's energy industry.

According to Tim Osborn of the National Oceanic and Atmospheric Administration (NOAA) and Steve Gill, senior scientist at the agency's Center for Operational Oceanographic Products and Services, by 2100 much of southeastern Louisiana will be under 4.3 feet of water. This area faces the fastest rate of sea level rise in the world. 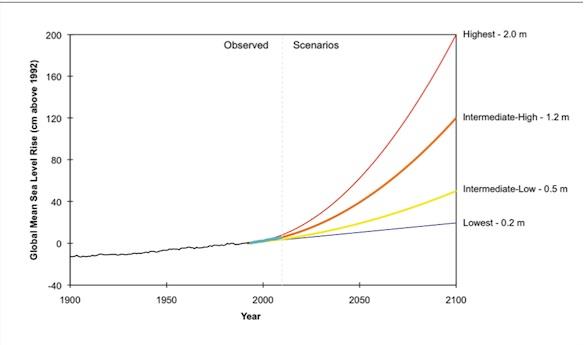 To put those numbers in perspective consider this: Grand Isle, Louisiana, which is 50 miles south of New Orleans, has reported annual increases in sea level of 9.24 millimeters, which is a third of an inch per year -- more than quadruple that of Key West, Florida.

Things are even worse in other areas. According to Mr. Osborn, "[W]e have rates of 11.2 millimeters along the south shore of Lake Pontchartrain -- the metro New Orleans area. And inside the city we have places with almost a half-inch per year."

To put it another way, every hour an area of land the size of a football field, 16 square miles per year, becomes submerged.

What's causing this?
While many people may initially think climate change is to blame for this slow-motion disaster in the making, in fact that's only partly the explanation. Southeast Louisiana has an average elevation of just three feet above sea level and, according to this study, much of New Orleans, whose port adds $37 billion to the U.S. economy each year (and supports 160,500 jobs), will largely be underwater within decades. 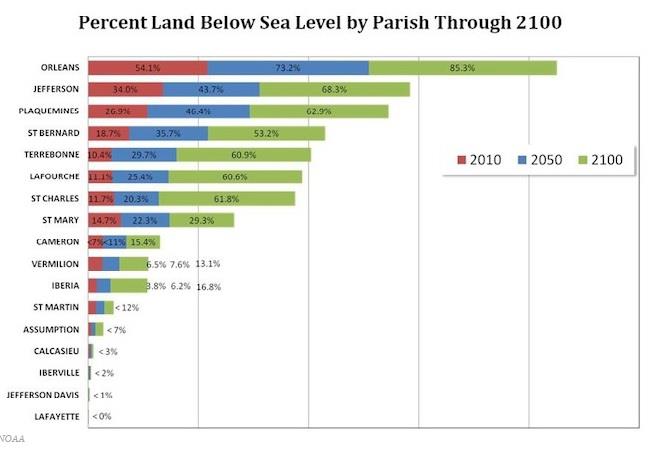 A major reason for this is the very levee system that the U.S. Army Corps of Engineers built to protect the inhabitants living near the Mississippi River after the catastrophic flood of 1927.

Historical context
In 1927 the US experienced the worst flood in history, with 27,000 square miles becoming submerged beneath as much as 30 feet of water. The calamity destroyed 160,000 homes, killed 500, and left 600,000 homeless. Congress responded with the 1928 Flood Control Act, which ordered the Army Corps of Engineers to construct a system of levees to forever tame the river and prevent such a tragedy again.

Unfortunately, an unintended consequence of this levee system is that it cut off southeast Louisiana from periodic replenishment of the millions of tons of annual sediment that had, over millions of years, built the very land that is now Louisiana on 400 feet of muck.

While the levees were a boon for trade and flood control, they are resulting in the land drying out and sinking. The situation was made worse when oil and gas where discovered and, over the decades, 50,000 wells were drilled, along with over 10,000 miles of canals that were dredged to service them.

America's energy future at risk
The land that's currently sinking is home to some 50% of the country's oil refineries as well as a network of pipelines that serves 90% of the nation's offshore oil production. In total, 30% of our oil and gas supply faces disruption in the coming decades if something isn't done. 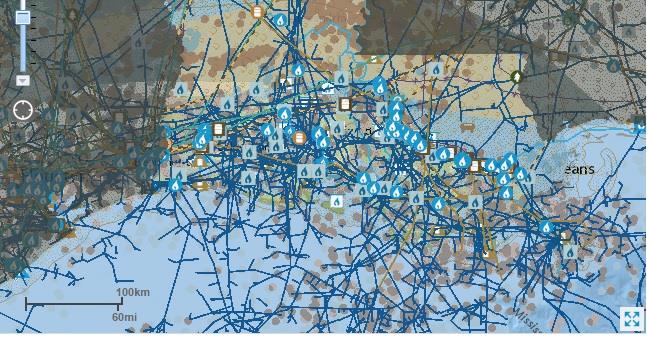 The companies most directly affected include Chesapeake Energy (CHKA.Q), ExxonMobil (XOM 2.97%), Halliburton (HAL 4.46%), Cheniere Energy (LNG 2.67%), and its MLP, Cheniere Energy Partners (CQP 5.21%), all of which have major oil and gas operations in the affected areas. 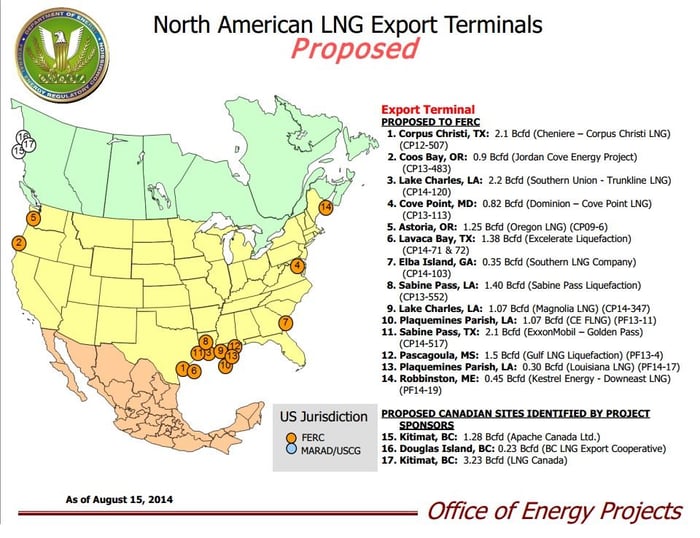 Specifically, Cheniere's Sabine Pass LNG (liquefied natural gas) export terminal is threatened by the coming disaster, along with three of America's 14 proposed LNG export terminals. In total these four terminals represent 23% of America's potential LNG export capacity and should they be taken offline by the rising waters, many of the benefits of natural gas exports could be threatened.

Can anything be done?
After Hurricane Katrina in 2005, Louisiana's state legislature came up with a long-term coastal restoration plan to prevent the coming cataclysm. The plan calls for $50 billion to be spent over 50 years to build additional levees, deposit large amounts of sediment to rebuild sunken land, and divert rivers to reconnect the drying out delta. Computer projections show that, should the project be completed on schedule, more land would be reclaimed than is being lost, at least minimizing the damage.

Some of this money will come out an increased share of oil and gas royalties, especially from offshore producers, but this will only amount to $14 billion, or 28% of the needed amount.

Thus far Congress has refused to provide any funding and coastal advocates are calling for oil and gas companies to be made to pay for the project. The industry has acknowledged a partial responsibility for the problem, but is defending itself from a lawsuit, filed in July 2013, from the Southeast Louisiana Flood Protection Authority-East, which maintains levees around New Orleans. The lawsuit was brought against 97 oil, gas, and pipeline companies and demands the companies pay the cost of the restoration. Several studies have found that the oil industry is responsible for between 16% to 50% of the loss of 2,000 square miles of land thus far.

Foolish takeaway
The sinking of southeastern Louisiana, an unintended consequence of flood control levees and oil and gas production, threatens the homes of 2 million people, as well as energy infrastructure vital to both America and the world. Even if the funds can be obtained to fund the experimental coastal reclamation plan, the effects on America's energy landscape may be irreversible. Further study is needed to help determine how best to prevent similar damage to other vulnerable areas.