Because the average cost of developing and bringing a new drug to market has now surpassed a whopping $5 billion, it has become commonplace for smaller pharmas to license out their first few approved products to larger companies with more resources, especially on the marketing end of the spectrum. Big Pharma, for its part, have also been increasingly willing to sign licensing agreements, with the intent to replace lost revenue from patent-cliff victims.

French biopharma Sanofi (NASDAQ:SNY) continued this growing trend earlier this year by agreeing to a global licensing deal with MannKind Corp. (NASDAQ:MNKD) for its newly approved inhaled insulin product Afrezza and its palm-sized delivery apparatus, Dreamboat. Under the terms of the agreement, MannKind will receive a $150 million upfront payment and up to $775 million in milestone payments. Net profits or losses will be split 65% for Sanofi and 35% for MannKind, according to the press release.

The Street was apparently expecting a much richer deal for MannKind, as shares have now plummeted by over 26% since this deal was announced in August. 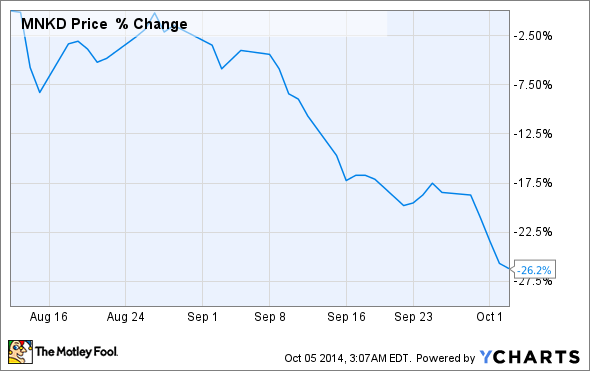 Putting market expectations aside for the moment, I think the question investors should consider now is: Why is Sanofi interested in Afrezza? With this question in mind, let's take a deeper look at this deal and consider its effects on the market as a whole.

MannKind didn't get a great deal for Afrezza. Why?
This licensing agreement undoubtedly fell well short of the expectations of many MannKind bulls.

So why did MannKind not get a better deal? The blame probably falls squarely on Pfizer's (NYSE:PFE) failed inhaled insulin product Exubera. That drug cost Pfizer a stunning $2.8 billion in losses and led Eli Lilly (NYSE:LLY) and Novo Nordisk (NYSE:NVS) to exit the inhaled insulin product race altogether. In short, Sanofi was probably the only major pharma willing to market an inhaled insulin device at this point, given that the other insulin-makers swore off this approach years ago.

Sanofi's reasons for inking this deal are bountiful
The industry has come to view inhaled insulin products as risky following the Exubera calamity. And instead, we have seen a bitter competition break out in the basal and fast-acting insulin markets via minimally invasive injectables.

On the basal side, Sanofi pretty much owns the market with Lantus. However, Lantus is set to go off patent protection in February, and major pharmas have been ramping up to launch generic versions. And Lantus makes up roughly 20% of Sanofi's revenue, so it's a pretty big deal for shareholders there.

Sanofi is hoping to replace Lantus with a longer-acting form called Toujeo, but again, Lilly and Novo are hard at work developing competing versions called insulin peglispro and Tresiba, respectively. In sum, Sanofi's 80% market share of the basal insulin market is under serious duress.

By playing the intellectual-property game, Sanofi may be able to fend off competitors long enough to transition most, if not all, patients over to Toujeo down the line. That said, this scenario is far from certain and could result in a massive hit to Sanofi's bottom line.

Is Sanofi hitting its competitors where it hurts with Afrezza?
Sometimes the best defense is a good offense. And that appears to be Sanofi's strategy with Afrezza. While other Big Pharmas may have passed on Afrezza because of the risk involved, I think Sanofi saw an opportunity to hit its chief competitors, Lilly and Novo, in the pocketbook. Lilly and Novo currently dominate the fast-acting insulin market. Taken together, these two injectables and their delivery devices raked in over $7 billion in sales in 2013.

Afrezza's label restrictions won't allow it to completely replace these two fast-acting insulins, but it should be a handy add-on product that could cut deeply into their sales. Based on the market size and growth potential for fast-acting insulins, I think Afrezza could see upwards of $3 billion in peak sales by 2020, with the proper marketing. Perhaps what's key to note is that these sales will ultimately come at Lilly and Novo's expense via lost market share.

Foolish wrap-up
Afrezza looks as if it could generate about $2 billion in peak revenue for Sanofi. While this sum would certainly help to replace lost revenue in the basal insulin market, I think Sanofi pursued Afrezza, in part, to help keep its competitors in check. Lilly and Novo may therefore come to regret not outbidding Sanofi for Afrezza. Time will tell.