Please ensure Javascript is enabled for purposes of website accessibility
Log In Help Join The Motley Fool
Free Article Join Over 1 Million Premium Members And Get More In-Depth Stock Guidance and Research
By Jeff Hwang - Oct 7, 2014 at 10:22AM

We can blame technology and payment processing issues for the underwhelming initial returns on online poker, but online poker’s problems are more fundamental.

The gaming industry gathered last week in Las Vegas for the 2014 Global Gaming Expo (G2E), the industry's premier trade show. In the year since G2E 2013, much has changed in the online gaming space.

In November 2013, both Delaware and New Jersey launched full-scale online casino gaming, joining poker-only Nevada as the first three states in the Union with legalized, regulated online gaming. That December, Wynn Resorts (WYNN 12.05%) -- along with Station Casinos and Churchill Downs (CHDN 10.34%) -- joined the American Gaming Association (AGA), marking Steve Wynn's return to the AGA for the first time since Wynn sold Mirage Resorts to what is now MGM Resorts International (MGM 11.30%) in 1999.

At the end of January, Wynn told Jon Ralston of Ralston Reports that he had come to agree with Las Vegas Sands (LVS 5.86%) CEO Sheldon Adelson, supporting Adelson's views and his fight to ban online gaming. And then in May -- now with two of its most prominent members directly opposed to online gaming -- the AGA told The Wall Street Journal that it would withdraw its support for online gaming, citing divisiveness among its membership.

In June, Montreal-based gaming supplier Amaya Gaming Group (TSGI) made a splash when it announced an agreement to acquire 100% of Isle of Man-based Oldford Group and its Rational Group -- the parent company of PokerStars and Full Tilt -- opening the door for the entry of the PokerStars brand into the New Jersey online gaming market, and perhaps beyond.

Meanwhile, legal online gaming in the U.S. has sputtered out of the gate. According to data compiled by the UNLV Center for Gaming Research, online gaming in Nevada, New Jersey, and Delaware combined has generated only about $92 million in revenue in 2014 through August -- that is, roughly the equivalent of a 3rd-class riverboat casino, divided unequally among more than a handful of operators in three states -- with New Jersey accounting for $83.7 million of that figure. Of that $83.7 million, online poker in New Jersey has generated only $21.1 million in 2014 through August, accounting for only a quarter of total online gaming revenues in the state.

Moreover, it's become clear that online poker specifically and online gaming in general will be at best a two- or three-player game in any given state. The MGM/Boyd Gaming (BYD 8.83%)/bwin.party Borgata partnership and Caesars Entertainment (CZR) have accounted for essentially all of the online poker revenue in New Jersey, while Borgata, Caesars, and the Tropicana have combined to account for 82% of all online gaming revenues in the state this year. bwin.party, incidentally, reported in August that for the first half of the year, the company had lost €7.3 million in New Jersey, and that it expected to lose another €6 million in that market for the remainder of the year.

In short, as has been noted by every media outlet to report on the subject this year, online gaming has wildly underperformed even the most pessimistic of projections thus far, with the lowest first-year projections for New Jersey originally in the $200 million range.

At this stage, there is little dispute that online gaming has a place in the future of the industry. But the future of online gaming is seen as being largely mobile, with shorter sessions and largely small-stakes casino gaming, as opposed to the marathon sessions of desktop-based online poker of the 2000s.

That said, thanks to its poorer-than-poor start, the general enthusiasm for online gaming has waned. Answering a throw-in question at the tail end of a conference session on global gaming market conditions, Bill Lerner of Union Gaming described the amount of time being spent on online gaming (presumably among casino operators at large) as being a "low single-digit percentage."

And for the first time since the U.S. Congress passed the Unlawful Internet Gambling Enforcement Act of 2006 (UIGEA), online gaming was a backburner issue at G2E 2014.

On underperformance, player attrition, and market projections
Online gaming proponents are quick to point out that a big part of the reason for the underwhelming performance of online gaming thus far is due to technical issues -- among them payment processing issues, geolocation issues, and poor software. It's certainly true that this industry is just getting (re)-started; that the product is not what it will be; and that we should see the numbers improve as these issues sort themselves out.

On the other hand, I also think poker specifically is suffering from problems more fundamental than that, and which are related to the skill gap problem we discussed two years ago -- a problem which all online poker room operators have long been aware of, but also something that I suspect has largely been unaccounted for by the financial types making these revenue projections.

The short version of the skill gap problem is that there are too many professional players and not enough fish, and that the skill gap has widened and will continue to widen. The game has gotten too tough for the casual player, and is not getting any easier as weak players continue to bust out of the game.

Frankly speaking, it is not reasonable to expect bad players -- or even decent players who used to be winners but can no longer beat the rake -- to continue to enjoy losing unto perpetuity. 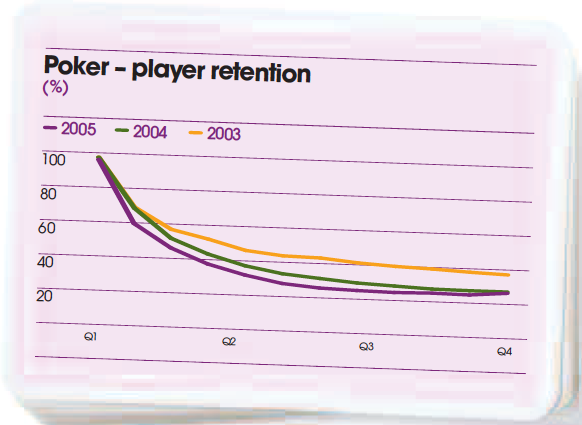 I’ll put it this way: Why is it that every U.S. online gaming market projection features revenue projections that only go up -- including individual projections for poker-only states -- at a time when the rest of the global online poker market is in decline?

I suspect it's likely that the rate of player attrition has been underestimated -- if not completely unaccounted for -- in the U.S. market projections that have been thrown around. Moreover, the impression I get from conversations with people in the industry is that poker may also be too dependent at this stage on new players coming of legal age (i.e. turning 18 or 21) for growth.

And the other problem that should be noted is that the "projections" being thrown around often aren't intended for accuracy, but are rather better categorized as sales pitches. When New Jersey Governor Chris Christie produced a state budget in February 2013 -- while running for reelection -- implying that online gaming in New Jersey would generate $1.2 billion in first-year gaming revenue while most everybody else was roughly in the $200 million to $400 million range, that's not a projection; it's a sales pitch. Further, forecasts issued by investment banks might be subtler but are often also suspect, as banks may have other motives for issuing certain projections other than mere accuracy.

For more online gaming coverage from Jeff Hwang, check out: