Please ensure Javascript is enabled for purposes of website accessibility
Log In Help Join The Motley Fool
Free Article Join Over 1 Million Premium Members And Get More In-Depth Stock Guidance and Research
By Motley Fool Staff - Oct 8, 2014 at 8:35AM

These may be cheap biotech stocks, but they may not be cheap for long according to the three analysts we asked. 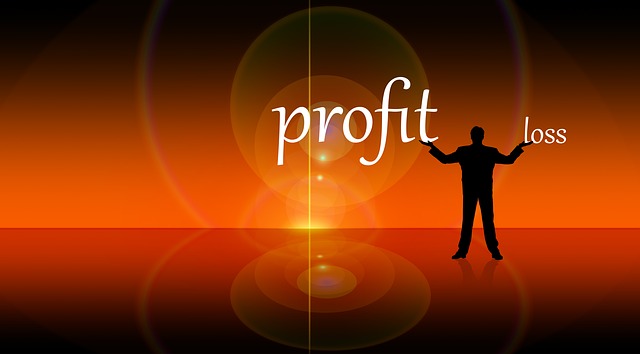 While the broad-based SPDR S&P Biotech ETF has galloped higher by 20% year-to-date, a number of biotech stocks are wallowing near their 52-week lows. Could there be bargains to be had among this sea of red?

With that in mind we asked three of our health care analysts to pick one biotech stock they felt had a good chance to turn things around; and here's what they had to say: 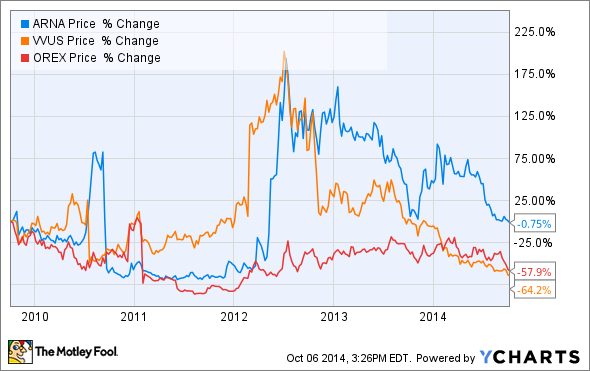 I wouldn't recommend going all in -- it's hard to call the bottom -- but if you think the drugs can eventually gain doctors' confidence, now could be a good time for a starter position.

Looking at their current valuations, Orexigen looks like the best investment with a market cap that's now under $500 million. VIVUS is cheaper, but without a large marketing partner, it's hard to see its obesity drug Qsymia taking off. Like Orexigen, Arena Pharmaceuticals has a marketing partner, Eisai, but the Japanese pharma hasn't been able to get much traction since launching Belviq over a year ago. Arena's market cap is also considerably larger than Orexigen's although admittedly it has a better pipeline, so a higher price tag is justifiable.

There's a lot of overlap between diabetes and obesity, so Takeda's experience with its blockbuster diabetes drugs Actos and more recently with its Nesina franchise should help Orexigen's marketing partner have a more successful launch than Qsymia and Belviq. Their obesity drug Contrave also sits in a sweat spot, producing more weight loss than Belviq with less severe side effects than Qsymia.

George Budwell: On September 12, an Advisory Committee to the Food and Drug Administration voted 8 to 5 in favor of approving NPS Pharmaceuticals (NASDAQ: NPSP) treatment for Hypoparathyroidism called Natpara.

Despite this favorable vote, shares of NPS crashed and are now down by 31% over the past year. What spooked investors was the panel's tepid recommendation for Natpara, with some members even stating that the only reason they voted "yes" was because of compelling patient testimony. Put simply, they weren't overwhelmingly convinced the drug works, and some questions regarding Natpara's safety weren't resolved by the clinical data, according to the panel.

With NPS shares now inching toward their 52-week lows, I think this stock is a strong buy ahead of its Oct. 24 target action date for Natpara. The briefing documents from the FDA were positive in their tone, leading me to believe the drug stands a good shot at being approved. From a fundamental perspective, Natpara's approval should double the company's revenues within two years of its launch. This sell-off thus looks way overdone to me.

Sean Williams: For my buy I'm pilfering off a stock I already own: Exelixis (EXEL 0.00%).

Exelixis was hammered early last month after announcing that Cometriq failed to improve median overall survival in a statistically significant manner in its late-stage prostate cancer study known as COMET-1. While certainly not good news, I don't see this as being anywhere near the end for Exelixis despite the stock being priced in fire-sale territory.

To begin with, Cometriq is still being examined in two additional studies that could have broad implications. The company's METEOR study targeting metastatic renal cell carcinoma should yield results next year, while its CELESTIAL study on advanced hepatocellular carcinoma should lend results by no later than 2017. The METEOR study is particular intriguing as progression-free survival, not overall survival, is the primary endpoint, making it possibly easier for Cometriq to meet or exceed this target.

Additionally, Exelixis and collaborative partner Roche (RHHBY 1.39%) announced positive data from its coBRIM study for the combination of cobimetinib and FDA-approved Zelboraf last month as a treatment for advanced melanoma with the BRAF V600 mutation. The combo including cobimetinib delivered a progression-free survival improvement of 3.7 months to 9.9 months and reduced the risk of disease worsening by 49%.

Between Cometriq's additional studies and cobimetinib's possible approval I suspect Exelixis has more upside than downside potential at this point.