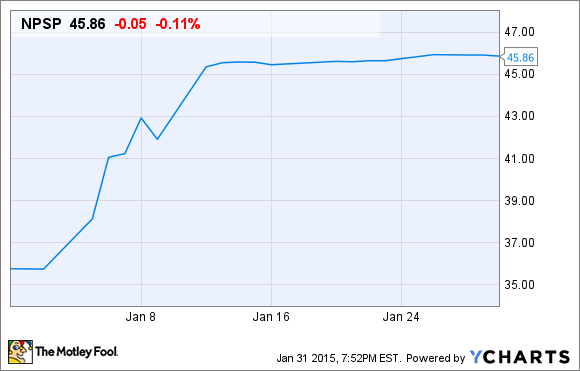 What: Shares of NPS Pharmaceuticals (NASDAQ: NPSP), a biopharmaceutical company focused on developing therapies targeted at rare and orphan-class diseases, soared by 28% in January, per S&P Capital IQ, after a double dose of good news.

So what: First, and the biggest news by far, was the announcement from Shire (NASDAQ: SHPG) that it would be acquiring NPS for $5.2 billion, or $46 per share, in an all-cash deal. According to Shire the transaction is expected to be accretive to its adjusted profits beginning in 2016. Shire's deep understanding of gastrointestinal drugs and its experienced global marketing team should make the combination a success based on language used in the press release.

Now what: This deal really shouldn't come as a huge surprise as NPS had been on the map as a takeover candidate for more than a year. Because NPS operates in rare diseases many of its proposed therapies have little to no competition. Furthermore, because few alternatives exist NPS can get away with charging reasonably high prices for its product. This is a potentially favorable setup for a big pharmaceutical company looking to replace lost revenue from patent exclusivity losses, or that just wants to quickly boost their growth prospects.

Shire, on the other hand, walked away with a $1.64 billion breakup fee after AbbVie decided not to go through with its buyout of Shire in October. Another way of looking at this is Shire is getting NPS for closer to $3.6 billion after you factor in this "free money."

Between Gattex and Natpara, both could combine for peak annual sales by the end of the decade near $900 million. Considering the breakup free cash this seems like a pretty fair price for both parties involved.