The world behind where we get our gasoline, diesel, and petrochemical products is a fascinating thing. Massive companies today scour the world for the next oil find with hulking ships and drill bits that can go miles underground. One company that makes much of this world possible is oil & gas equipment and services provider National Oilwell Varco (NYSE:NOV).

To help you better understand how this company works behind the scenes to keep oil flowing out of the ground, let's look at five key aspects management wants you to know about the company.

"[W]e've been on a run rate of about 40 rigs a year going into shipyards and as I mentioned earlier, see that going up to 130 in 2017, that's just based on NOV delivered kit." -- Clay Williams, president, chairman, and CEO.

National Oilwell Varco isn't too concerned with the amount of oil that comes out of the ground, but instead about how that oil is extracted. As conventional land drilling becomes a smaller and smaller part of the energy equation due to declining production, energy companies will rely increasingly on other sources such as deepwater and shale drilling. This will require a near-complete turnover of the world's drilling equipment, including floating drillships, jack-up rigs, and land drilling rigs with the capability to drill horizontally.

National Oilwell Varco is positioning itself as the leading equipment supplier to this massive infrastructure turnover. It already holds 80% of the market share for offshore drilling packages -- the actual drilling equipment on a rig or ship -- and that will grow as new rigs come onto the market and older ones are retired. Also, thanks to many of its standarization practices, it has basically made itself the exclusive supplier of replacement parts for these drilling packages.

We're the best around

"Importantly, analysis of NOV's financial results and rig building through the past decade demonstrates that earnings and cash flow can and do remain strong for cyclical order down terms." -- Williams.

Even though the demand for oil and gas doesn't fluctuate that much, it does go through cycles, and the equipment and services companies see a lot of that up and down since their revenue is dependent upon what producers spend on new exploration and development. This can dramatically impact the bottom line, but National Oilwell Varco has risen above the fray here because it has a sizable backlog of orders for large-ticket items such as new rigs, as well as an emerging business: floating production, storage, and offloading facilities.

Having this big backlog of orders and being a supplier of consumable products such as drill bits enables the company to keep working and maintain strong revenue and EBITDA growth even through industry downtimes. This has been a major factor in why NOV has consistently outpaced its peers in EBITDA growth over the past eight years. 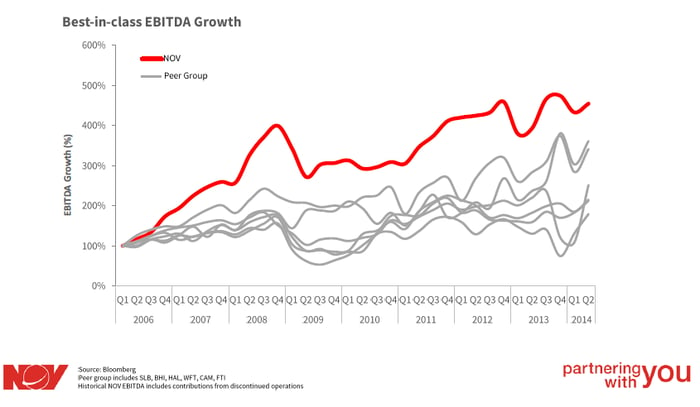 "[W]e continue to strategically deploy capital into our business through acquisitions that complement our existing businesses and through infrastructure investments to improve efficiencies to shorten lead times, improve customer service and enhance competitive advantage." -- Williams.

Traditionally, the oil equipment and services business has been fairly fragmented. There are a small handful of big players, but also hundreds of little mom-and-pop companies. One way NOV's management has grown its business is by strategic acquisitions of these smaller players. In the past 12 years, the company has made more than 300 acquisitions, which is a large part of why NOV has captured significant market share in some targeted areas of the business.

While the company has attained a sizable market share, there are still numerous acquisitions to be made. So you can expect this trend to continue for many years.

Investors can gripe a lot when management spends large amounts of money on acquisitions, because many companies burn through all of their available cash for such deals. This isn't the case at National Oilwell Varco, which after all these acquisitions still generates free cash flow at a rate well above all of its peers.

Cash generation, of course, is a very good thing. In fact, it is one of the defining traits for Warren Buffett's energy investments.

... and return it to shareholders

"We [announced] a 77% increase in our regular dividend during the second quarter and believe that as we reassess our organic growth, capital needs through our strategic planning process, we can then turn to look at ways to return more capital to our shareholders." -- Williams.

There's nothing more relaxing to an investor than hearing the words "increasing dividend." This is one area where NOV has slightly changed direction since Williams took over from long-standing former NOV boss Pete Miller. While the company started paying a dividend in 2009, management ramped up that payout recently, and the large amount of cash sitting on the books suggests it has plenty of room to increase it even further. Granted, more than 90% of that cash is held abroad, and the company will need to find a way to repatriate it without incurring large taxes, but the opportunity is certainly there, and management will likely find a way to bring the money home.

The way that National Oilwell Varco has positioned itself, it's awfully hard to bet against the company. It has a dominant market share in a high-need industry, and it can turn that market share into free cash flow to grow the business and return some value to investors without needing to access capital through debt. This formula should be a winning combination for many years to come, and investors would be wise to at least have this company on a short list of stocks to buy.