It's been a series of unfortunate events, but is it anything material to Clean Energy Fuels as a business?

What: Shares of natural gas for transportation refueling leader Clean Energy Fuels (CLNE 2.10%) fell another 7% today, adding to the total losses that began in earnest in late August: 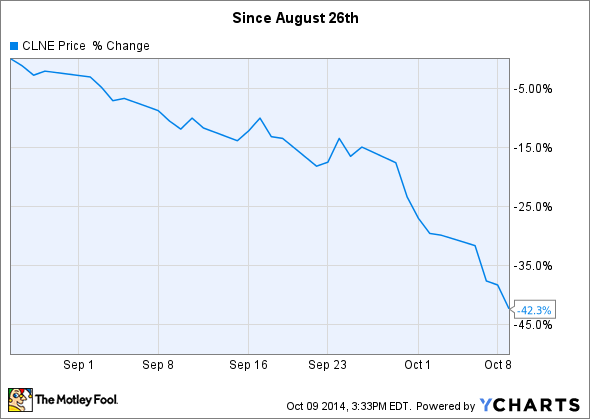 The precipitous drop has corresponded to falling oil prices, with WTI and Brent Crude -- the two main standards for oil pricing -- down 15% and 21% respectively since mid-June. What do oil prices have to do with a company that sells natural gas? A lot, when your biggest competitive advantage is a cheaper price than gas or diesel.

Furthermore, occasional partner and natural gas engine technology expert Westport Innovations (WPRT -5.64%) dropped a bomb on the market on September 30, revising down its guidance for the full year and saying it wouldn't reach its adjusted EBITDA goals for its operating units in 2014, citing the economic and geopolitical situations in Europe, China, and Russia -- its biggest markets right now -- as the main reasons.

So what: The interesting thing is, there hasn't been any "bad" material news to Clean Energy Fuels in the interim. To the contrary, the only news that's come out about Clean Energy since late August is a series of announcements of long-term deals to fuel more heavy-duty trucks. Combined, these recent agreements are worth more than 3 million gallons of new natural gas sales per year.

However, Mister Market is clearly lumping all of the natural gas vehicles companies in one basket right now. And even though sales of heavy-duty natural gas trucks are expected to reach 11,000 this year -- 27% growth from 2013 -- adoption has happened at a slower rate than many hoped for.

Now what: Much like the offshore drilling industry, falling oil prices and economic uncertainty have created a lot of fear, even if some of it is unwarranted. If you're a Clean Energy Fuels shareholder, it's understandable if the losses are making it hard to not get out now. However, it's also important to remember that there hasn't been any material news about or from Clean Energy to indicate it has "earned" this beating. To the contrary, the company has only added more trucking customers in the past six weeks. Furthermore, its rate of fuel deliveries has only grown over the past several quarters, and that should continue, as its trucking customers are still using those trucks.

Finally, natural gas still remains far cheaper than diesel and gasoline, with many large trucking businesses paying as much as $1 per gallon less. Furthermore, Westport made it clear in its announcement that its 12 liter ISX12 G engine, being built in its JV with Cummins (CMI 0.30%), is unaffected by its sales forecast adjustment. This is the only widely available natural gas engine for the heavy trucking market, so another indicator that Clean Energy is largely unaffected by both falling oil prices and Westport's problems.

Keep an eye on Clean Energy's business fundamentals, and not all the market noise. I know how hard it is to do so (I'm a shareholder, too), but we own the business, not the market. While this could be an excellent opportunity to buy, I fully expect the market to remain uncertain for some time, and it's probably not a good idea to "go big." There's just too much uncertainty right now, and it's going to continue to be a bumpy ride.