We've all done the math before. A stock trading for a few pennies could make us a boat load of money by just rising to a dollar a share. The allure is that we could make a lot of money by starting with a little. However, all too often these penny stocks go to zero. That's because investors are more focused on the stock price instead of the underlying business, which more often than not doesn't actually exist with penny stocks.

That being said there are some lower priced stocks that actually have strong underlying businesses and real assets. These companies are technically penny stocks according to the SEC, because a penny stock is simply a stock that trades below $5 per share. That definition offers a much broader array of companies than those stocks that the "pump-and-dump" crowd would like to see you get caught up in. Here are three really solid energy companies that sell for less than $5 a share; though, I will warn you, they are not without risk.

High flying oil production
While a lot of penny stocks are shallow shell companies, Halcon Resources Corp (NYSE: HK) is full of oil-rich growth. In fact, its oil production jumped 140% from the first quarter of 2013 to the third quarter of 2014 thanks to its strong position in the Bakken and Eagle Ford Shale plays. Meanwhile, unlike a lot of highly touted penny stocks, Halcon Resources has real assets and as of the end of last year the company had 119.6 million barrels of oil equivalent, or BOE in proved reserves that were worth $2.3 billion. Meanwhile, the underlying business continues to improve. As the following slide shows, the company has dramatically improved its Bakken Shale operations. 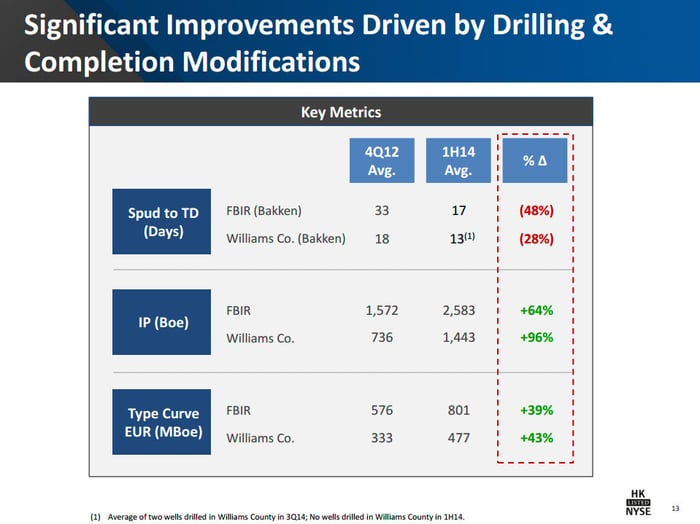 Here we see that Halcon Resources is drilling its wells a lot quicker, and those wells are producing more oil initially as well as over the life of the well. This combination is improving the rates of return the company is earning on the money it's investing in new wells. So, while Halcon Resources might have a penny stock price, its operations are solid and growing stronger.

Don't miss this penny stock
Another company with a low stock price, but strong operations, is SandRidge Energy (NYSE: SD). This Midcontinent focused oil and gas company has real assets including 377 million BOE of proved reseves that were worth $4.1 billion at the end of last year. These assets, when combined with the company's solid growth plan has SandRidge Energy expecting to grow its production by about 20% per year, while growing its EBITDA by more than 30% each year without breaking the bank as it expects to keep its capital spending flat.

On top of that solid growth, SandRidge Energy is really focused on improving its operations and returns. As this next slide shows the company currently earns an internal rate of return of 65% on the wells it drills. 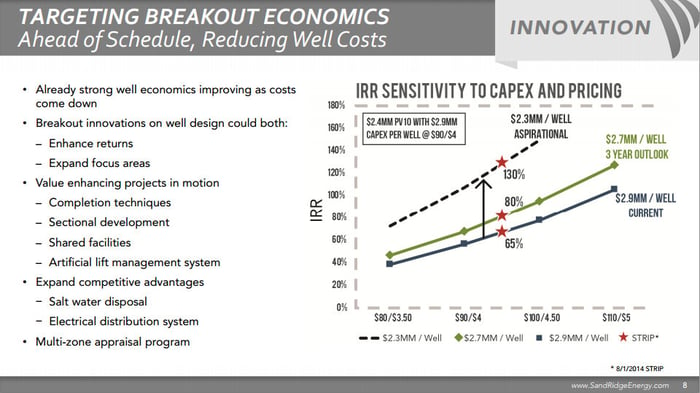 However, as that slide also notes, the company is working toward improving its returns to 80% with an aspirational goal to hit returns north of 100%. So, while most penny stocks are focused on getting investors to pile on to boost their stock price, SandRidge Energy's focus is on improving its operations and returns. It's a plan that will actually create value instead of just inflating its stock price.

Monster results
The final top-tier penny stock is Magnum Hunter Resources Corp (NYSE: MHR). While its stock price might miss the penny stock $5 per share cutoff depending on how volatile the market is on any given day, it's still a low priced stock that has solid operations and a lot of upside. Not only that but the company is loaded with assets as it has 79.8 million BOE in proved reserves and another 891.1 million BOE in contingent resources.

Speaking of this upside, Magnum Hunter Resources recently drilled the best shale gas well ever in the U.S. The well, located in the Utica Shale of West Virginia, delivered a stunning peak initial production test rate of 46.5 MMcfe/d. More importantly that discovery was in the most southwestern part of the play suggesting that Magnum Hunter Resources' acreage in that part of the play is just loaded with natural gas. Needless to say, this penny stock isn't full of hot air.

Investor takeaway
Investors seek out penny stocks in hopes of finding a quick profit. Those profits almost never materialize as the stocks behind them are almost always just full of hot air. Not so with these three top-tier penny stocks that combine a low stock price with strong operations and real assets making them solid candidates to earn real returns over the long-term.