Facebook (NASDAQ:FB) will report third-quarter earnings after the closing bell on Tuesday, Oct. 28. It's one of the most highly anticipated earnings reports of the season, as Facebook is both one of the world's most recognizable brands and one of the hottest stocks on the market, with shares up 45% in 2014 and nearly 200% since the start of 2013.

However, Facebook's management warned during their second-quarter earnings call that revenue growth would "decline meaningfully" over the course of 2014, which makes it perhaps too optimistic to hope for a repeat of that quarter's 60% year-over-year top-line growth. There are some obstacles between Facebook and these optimistic targets, but the company also has a lot of opportunities hidden in the world's largest captive user base. Let's take a look at some of the keys to Facebook's third quarter now, so we'll better understand what might happen next week.

How much more revenue can Facebook squeeze out of its user base?
Facebook's growth is well-documented, but it's important to distinguish between its two major types of growth -- user growth, and revenue-per-user growth. The former has been tailing off for a while as a simple consequence of Facebook's monstrous scale, but the latter has kicked into high gear since 2012, with the company producing more revenue growth per user, quarter after quarter, for most of the past two years: 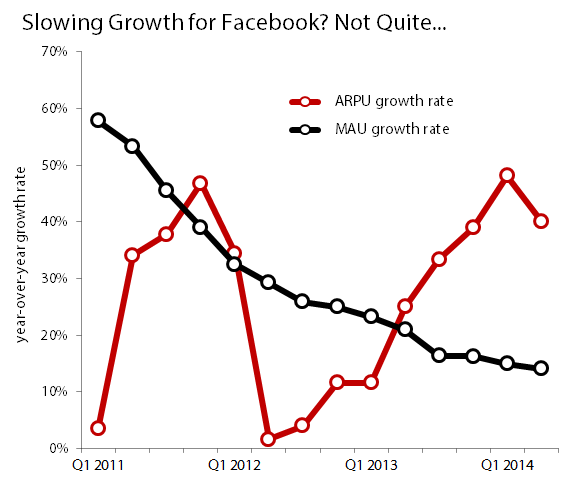 I've written about average revenue per user (ARPU) in depth before, and I believe it's Facebook's single most important financial metric to watch going forward. This is particularly true now that it's no longer possible for Facebook's monthly active user (MAU) base to grow by leaps and bounds, since the company now has nearly 60% of all Internet users in the world (except those from China) signed up for its service.

Your stance on Facebook's long-term ARPU potential probably hinges on which company you view as its primary competitor. Last year, Google (NASDAQ:GOOG) (NASDAQ:GOOGL) had an ARPU of $45, far above Facebook's trailing 12-month ARPU of $8.10, but second-place social network Twitter (NYSE:TWTR) had an ARPU of $3.55 last year. Facebook may not have a much longer ARPU growth runway if social networks simply aren't able to monetize as well as search engines. On the other hand, Google's ARPU is about five times larger than Facebook's, so if Facebook's monetization potential is even half as good as Google's, it still has a long way to go.

Facebook's most recent quarter was the first since 2012 to show slowing ARPU growth from one quarter to the next. If this becomes a trend in the third quarter, investors are less likely to forgive the company's high valuation premiums than they have been so far. Rapid growth gives companies a lot of leeway, but valuations tend to quickly come back to earth once that growth slows down.

How much is Instagram really contributing?
Facebook bought picture-sharing network Instagram shortly before it went public two years ago. Since then, Instagram's user base has exploded from roughly 35 million to over 200 million users (and still growing like gangbusters) today. However, one thing has remained constant ever since the acquisition -- Facebook has never offered any Instagram-specific data in its quarterly results, despite the fact that Instagram now trails not too far behind Twitter's 271 million MAUs.

Instagram began running ads late last year, and advertising industry publication Ad Age recently estimated that month-long Instagram campaigns might cost  companies anywhere from $500,000 to nearly $1 million. That's far from chump change, and even if Instagram isn't yet on Twitter's level, producing a quarter of Twitter's trailing 12-month revenue would give Instagram a top line of roughly $250 million a year. That's not much compared to Facebook's $10 billion in total trailing 12-month revenue, but it's a meaningful contribution, and Instagram's importance to Facebook is bound to increase as younger users migrate from the latter to the former.

Much of Facebook's strategy -- particularly its shift from a desktop to a mobile focus -- comes with enough data to easily analyze, but Instagram is still somewhat of a black box, user numbers notwithstanding. The company isn't likely to break these numbers out until Instagram's ad platform is more firmly established, but some insight will go a long way toward helping investors understand what's driving Facebook's growth.

And speaking of growth drivers ...

How much of Facebook's revenue will come from mobile ads?
Facebook has made incredible progress since launching ads on its mobile app two years ago. Mobile accounted for 3% of the company's ad revenue in its first quarterly report, but now accounts for nearly two-thirds of Facebook's ad revenue: 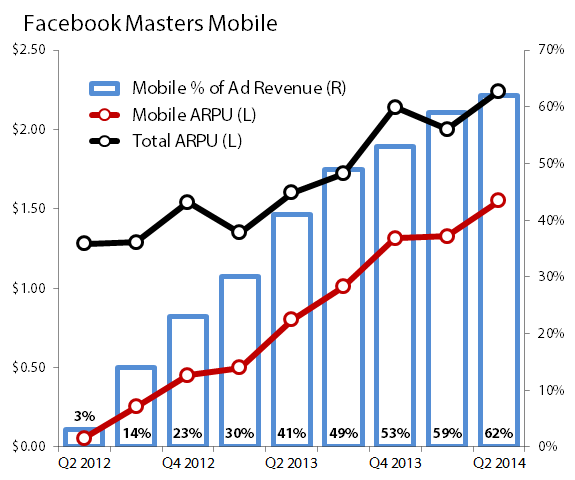 Facebook's mastery of mobile advertising has been the biggest reason why so many bears were left in the dust over the past few years. Facebook is clearly mobile-first at this point, but mobile's share of all ad revenue has stabilized somewhat after a rapid increase through the end of 2013. Can mobile jump to a full two-thirds share, or even reach 70%, of all ad revenue for the third quarter?

Slowing growth in this metric would be a sign of maturation, and Facebook is currently valued at such a high premium that anything indicating maturation will be received poorly by the market. The company not only needs to produce strong growth in its overall ARPU, it also needs to show that its mobile ad sales are still in rapid growth mode to justify a P/E near double digits -- particularly since a number of high-tech high-growth companies have already been pummeled for the slightest disappointment in this earnings season.