Precision Castparts Corp.'s (NYSE: PCP) earnings came in a little lighter than expected, but investors might not want to panic just yet. Any company involved in the production of heavy capital goods is likely to see some lumpiness in its revenue and earnings from quarter to quarter -- and so it was with Precision Castparts' second quarter.

So it's an earnings "miss," and the market did what the market usually does in such cases: It promptly marked the stock down yesterday, on an otherwise strong day for the S&P 500.

However, as noted above, Precision Castparts is always going to be a business with a degree of uncertainty around the level of its earnings from quarter to quarter. Indeed, CEO Mark Donegan further alluded to this fact in his commentary on the outlook for the upcoming third quarter. On the earnings call, he talked about the "end-of-year dynamic," whereby customers were likely to try to push work from the last days of December into January -- the idea being that by doing this the customer "manages" their end-of-year costs. It's definitely something to look out for in the next quarter.

In addition, as a supplier to Boeing and Airbus, a large part of the company's revenue is subject to those companies' production schedules -- something to look out for in future quarters.

Before going into detail on the company's segmental performance, here's a look at the breakdown of income by segment: 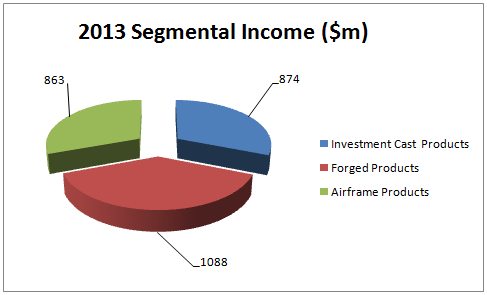 The weighting toward the commercial aerospace sector served the company well in the quarter. For example, the Investment Cast Products segment grew sales and operating income by 4% in the quarter, even while Donegan disclosed that "military shipments were essentially flat." On a more positive note, he also stated that "improved regional/business jet sales positively affected segment sales for the first time in several quarters"

While the weakness in military shipments is no surprise, the confirmation that regional/business jet sales are recovering is a good sign for the industry -- business jet sales are typically seen as more cyclical. Moreover, Donegan spoke of the anticipated ramp-up of new aircraft engine programs that the company has exposure to, such as the General Electric/Snecma CFM Leap engine and United Technologies' Pratt & Whitney unit with its PW1100G geared turbofan engine.

Forged products grew sales and operating income by 3% and 5%, respectively. Just as with the investment cast segment, Donegan outlined a difference in performance between two of its smaller end markets: "As with cast parts, we did see growth in regional and business jet; and in this one, we did see a decrease in military sales year-over-year." However, one large commercial aerospace customer decided to de-stock in the quarter and this reduced forged product sales by 2.5% -- another demonstration of how lumpy Precision Castparts' sales can be.

However, the real strength in the quarter came from its airframe product segment. Sales and operating income increased 18% in the quarter, with commercial aerospace sales up 20%.

The bottom line
All told, this was a pretty positive set of earnings numbers from Precision Castparts. However, its revenue and earnings are, as ever, dependent on the inventory decisions of its customers and overall commercial aerospace production rates. Naturally, the latter is subject to a combination of the growth in aircraft manufacturers' order books and their ability to increase production on schedule -- something that Boeing and Airbus are trying to do. As for Precision Castparts, it managed to leverage revenue growth into earnings growth, and perhaps investors shouldn't get too hung up on one quarter's earnings "miss."