As readers might already know, Warren Buffett's Berkshire Hathaway has been buying shares of Precision Castparts (NYSE:PCP.DL)  even as the stock has declined in the last year and a half. Essentially, the bullish case for the metal-components maker is that the sell-off is due to a combination of nonrecurring events and weakness in its oil and gas markets, but that the long-term growth potential from its core commercial aviation market remains intact. Let's look at four key conclusions from the recent fourth-quarter earnings and how they relate to the idea of buying the stock. 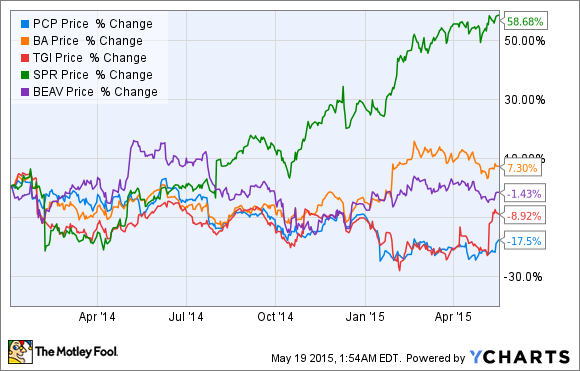 The usual suspects
First, returning readers will already know that the bulk of the company's problems in the previous few quarters have fallen on the forged products segment. It was the same story in the fourth quarter, in which weak oil and gas spending hurt the segment's profitability. According to CFO Shawn Hagel on the fourth-quarter earnings call, "strong double-digit declines in oil and gas and extruded pipe sales in the quarter."

Moreover, in the earnings release, management said the segment continues to suffer from the "continued negative impact from destocking at a single aerospace customer" (more on the issue in a moment). For now, here is a look at the company's segmental results. You can clearly see the sales, income, and margin decline in the forged products segment.

Aerospace customer destocking over?
Frankly, management's commentary on the issue was slightly disappointing. CEO Mark Donegan offered a cautious outlook on the issue earnings call: "I think that right now kind of what we are seeing, we are seeing moderation, so I would say as we go through this year, and we are probably expecting it to maintain kind of where it is."

Nevertheless, the decline appears to be moderating, and at some point the company will come up against the anniversary of the declines from last year. In other words, comparisons will get easier. In addition, if oil prices have bottomed, then the decline in oil and gas capital spending could also moderate.

Restructuring actions
Third, in light of some weakness in end markets, the company is restructuring to cut costs. As such, management announced a $174 million noncash impairment charge relating to its planned exit from the company's 50% interest in Yangzhou Chengde Steel Tube Co. Ltd., a China-based pipe manufacturer.

In addition, Hagel cited a $127 million noncash impairment charge "primarily reflecting valuation adjustments made to inventory and other assets associated with our oil and gas market, driven by the very rapid decline in external selling prices."

Finally, management announced an $8 million restructuring charge for head count reductions, which are intended to generate $30 million to $35 million in annual cost savings -- equivalent to roughly $0.15 in earnings per share in the coming year.

Free cash flow generation
Fourth, for those investors who focus on free cash flow generation, the earnings call provided some mixed commentary. It's always an area of concern for aviation suppliers, because product manufacturers often must make substantive capital expenditures to support end market growth. Indeed, the company has on average converted only 78% of net income to free cash flow over the last nine years.

Moreover, management guided for increasing capital expenditures from roughly $450 million in 2015 to $550 million in 2016. As such, free cash flow is forecast in the range of $1.4 billion to $1.5 billion, with net income of about $1.7 billion to $1.85 billion -- a conversion rate of about 81%. When asked during the earnings conference call when the company would convert net income into free cash flow at a 100% rate, management did not outline a clear pathway to that goal.

"I would say that this is not a business that necessarily has to -- is structurally driven to convert that 85% automatically forever and ever," said Jay Khetani, vice president of investor relations.

The takeaway
The weakness in Precision Castparts' oil and gas segment is understandable, although the continued destocking at one of its key customers is somewhat disappointing. The restructuring actions are good news, but the company's inability to aggressively increase free cash flow conversion is also a concern for investors.

On the other hand, it's hardly management's fault that oil prices have fallen so hard, and it's difficult to increase cash flow conversion when previous investments in the forged products segment are less productive than initially hoped due to the fall in energy prices. All told, the stock remains a play on long-term growth in commercial aerospace, but investors will have to tolerate some near-term issues.