Please ensure Javascript is enabled for purposes of website accessibility
Free Article Join Over 1 Million Premium Members And Get More In-Depth Stock Guidance and Research
By Jason Hall, Dan Caplinger, and Bob Ciura - Jul 11, 2015 at 8:02AM

Looking for great buys? Check out these three industrial stocks that our contributors think are worth buying now.

Since the turn of the century, industrial stocks -- the companies that make the durable goods and equipment that drive and support our economy -- have been some of the very best investments. As we get into the heat of the summer, we put three of our top experts under the spotlight and asked them to name an industrial stock that's worth buying right now. They gave us three innovative stalwarts: Emerson Electric ( EMR -0.11% ), Precision Castparts Corp ( PCP.DL ), and Ford Motor Company ( F -3.67% ).

Here's what they had to say about these companies, and why they look like great buys right now.

Bob Ciura: My favorite industrial stock is Emerson Electric, which I believe is a great stock to buy this month -- or any month, for that matter. Emerson has a fantastic track record of shareholder returns. The company has increased its dividend for an amazing 58 years in a row, which qualifies Emerson as a Dividend Aristocrat more than twice over.

Emerson is a compelling buy right now because it's unloved by the market. Shares of Emerson are down 12% year to date due to weakness in its businesses that cater to the oil and gas markets. Last quarter, revenue declined 7%, and adjusted earnings per share fell 16%. The strong U.S. dollar and the plunge in commodity prices were the key culprits. Foreign exchange by itself was accountable for 5 full percentage points of Emerson's sales decline last quarter.

But Emerson is taking steps to turn around its business to place it in a better position going forward. One such measure is to spin off its network power division, which is its second-biggest segment but also its least profitable business. Other businesses currently up for review include motors and drives, and power generation. These strategic divestments will shed low-growth businesses, and allow Emerson to reinvest in the best growth opportunities.

Because of Emerson's lagging share price, the valuation and dividend yield now look very attractive. Shares of Emerson trade for a very modest 14 times earnings, and the stock offers a juicy 3.5% dividend yield. Investors should consider scooping up shares of this strong company while its stock price is down.

Jason Hall: Precision Castparts hasn't done investors any favors with relatively underwhelming earnings results during the past few quarters, and the collapse in oil prices has certainly dented the company's prospects in its oil and gas business.

But while Mister Market remains fixated on these things, it's ignoring the major opportunity for years of solid growth in its aerospace business, which makes up nearly three-fourths of sales. The airline business has bounced back in a huge way in recent years, with record numbers of global orders for new aircraft.

Precision Castparts does a lot of business selling aftermarket replacement components and fasteners, so new aircraft are new opportunities for sales. The market seems to be completely overlooking this in its short-term focus. 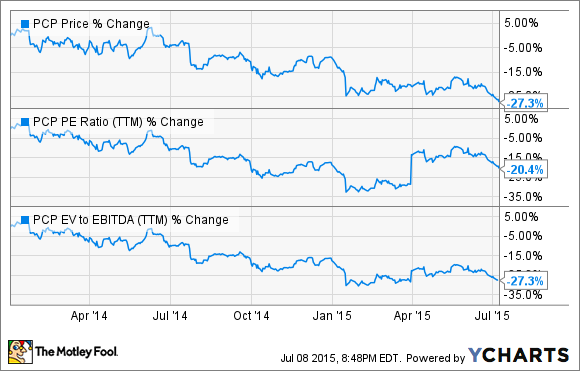 What does this chart show us? The stock price isn't the only thing that's fallen. Common valuation multiples, like price-to-earnings and EV-to-EBITDA, have also fallen, meaning the stock's price has decreased more than the company's earnings value. So it's really on sale right now.

Don't get me wrong: That's not to say that the stock is set to shoot up tomorrow. But over time, there's a very solid chance that patient investors will do well buying a great company when the market is underwhelmed with its results.

Dan Caplinger: Automakers have had several years of solid performance, and Ford Motor has benefited greatly from the rise in the U.S. economy since the end of the financial crisis. This year, Ford has seen some struggles that have led to weak performance in its stock; but there are reasons to believe that the share price could see gains in the future.

First and foremost, Ford has had considerable success with the rollout of its aluminum-rich new F-150 model, with the truck getting critical acclaim and positive reviews from customers. The problem that has held Ford back, though, is that ramping up production of the F-150 has had some snags, and not being able to supply all of its customers has hurt Ford's sales results.

With Ford's factories now working hard to make up for lost time and satisfy pent-up demand, the automaker could see future results improve. More broadly, despite concerns about poor economic conditions in Europe and China, Ford is moving forward with long-term investments in its core lines of vehicles.

Given the potential for added business that can come with a refreshed, redesigned model of a popular brand, those willing to commit to the stock for several years could get a nice payoff from Ford in the long run.

Ford's new F-150 is in high demand, and the company has more irons in the fire. Image source: Ford Motor.