Berkshire Hathaway management added to its position in Precision Castparts stock. Here's what you need to know about the company.

According to SEC filings, Warren Buffett's Berkshire Hathaway increased its stake in Precision Castparts Corp. ( PCP.DL ) in the fourth quarter of 2014. In October, Precision Castparts reported second-quarter earnings that came in below estimates, followed by a January pre-announcement that earnings would be below expectations in its third quarter as well. Consequently, the stock is down 13% year to date.

But Buffett's Berkshire Hathaway is known to ignore market sentiment in favor of investing where its management sees value, so let's take a closer look at the growth prospects for Precision Castparts Corp.

Why has Precision Castparts underperformed?

Essentially, the company is a play on commercial aerospace that also has significant military aerospace, power, and general industrial-based sales. The military sector accounted for 11% of total sales in 2014. 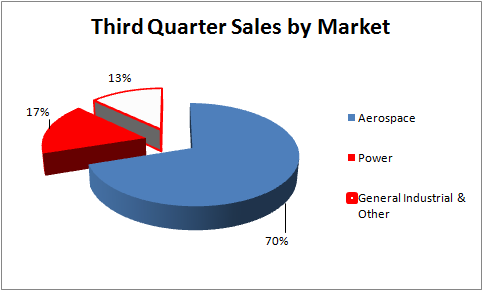 The company is largely a long-term play on new commercial aircraft production at Boeing Co. and, to a lesser extent, Airbus. However, the company missed analyst estimates in the past two quarters thanks to a variety of issues -- and it wasn't just about aerospace. See more in my detailed reviews of its second-quarter and third-quarter results.

In essence, these the issues:

The first two points are understandable in the context of the fall in energy prices and ongoing weakness in military spending. As I've previously outlined, CEO Mark Donegan indicated that the deferred shipments "will ship in the fourth quarter," while he said the forging is "fully functional." The greatest level of uncertainty within its aerospace operations relates to the destocking at one of its largest customers.

Precision Castparts by segment
A breakout of its segmental operating income for the third quarter demonstrates that the problems mainly affected its forged-products segment. 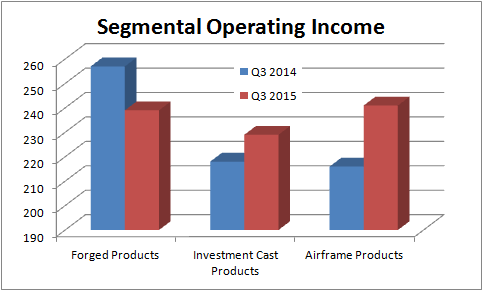 Each segment tends to sell to the same aerospace customers. For example, General Electric Company was responsible for 13% of overall 2014 sales, and the company cites Boeing Co., Airbus, Rolls-Royce, and United Technologies as being key customers.

The investment case for Precision Castparts
The recent setbacks can be seen as creating a good buying opportunity in a company with strong long-term growth prospects in commercial aerospace. Quoting from the company's most recent 10K filing: "The success of our business will depend, in part, on the success of new commercial and military aircraft programs including the Boeing 787, Boeing 737Max, Boeing 777X, Airbus A350, Airbus A320neo, and F-35 programs."

As readers already know, Boeing is planning to ramp up production on the 737 and 738 programs, and that's good news for Precision Castparts. Meanwhile, the 777X continues to generate, with 220 ordered in 2014 alone. Precision Castparts is traditionally known as a Boeing supplier, but its $625 million acquisition of Aerospace Dynamics in March 2014 increases its presence on Airbus programs, helping to de-risk the stock.

Should you buy Precision Castparts?
Berkshire Hathaway was built on investing in businesses with solid moats engaged in solid long-term growth industries, and Precision Castparts passes both tests. Potential future competitors can't simply build out manufacturing capacity to compete in its end markets without significant investment.

Moreover, there are only two major large-aircraft manufacturers, Boeing and Airbus, so it's fair to say that Precision Castparts management knows where its end demand will ultimately come from. If you can look beyond the recent disappointments and are positive on prospects within commercial aerospace, then the stock's recent weakness could be a good buying opportunity.