Do the biggest Warren Buffett stocks belong in your portfolio?

If you're in the market for some great stock ideas for your portfolio, it makes sense to look at what the smartest and most successful investors own. Few, if any, investors are  smarter or more successful than Warren Buffett, whose Berkshire Hathaway (BRK.A -1.14%) (BRK.B -1.07%) has averaged an annual gain topping 18% for 30 years. (That's enough to turn a single $1,000 investment into more than $140,000!) Coca-Cola (KO -0.75%) is one of Buffett's largest holdings, so let's see if it's worth buying.

First off, though, understand that Berkshire Hathaway is an unusual company, as it is primarily engaged in insurance (think GEICO, for example), but also owns a lot of stock in public companies -- as well as many companies in their entirety, such as Dairy Queen, Benjamin Moore, Fruit of the Loom, and the Burlington Northern Santa Fe railroad. It's easy to identify Berkshire's top stock holdings because Buffett reviews them in his annual letter to shareholders. His last one, for 2013, shows that Coca-Cola is Berkshire's second-largest holding, valued at year-end at roughly $16.5 billion. With about 400 million shares, Berkshire owns 9.1% of the company. 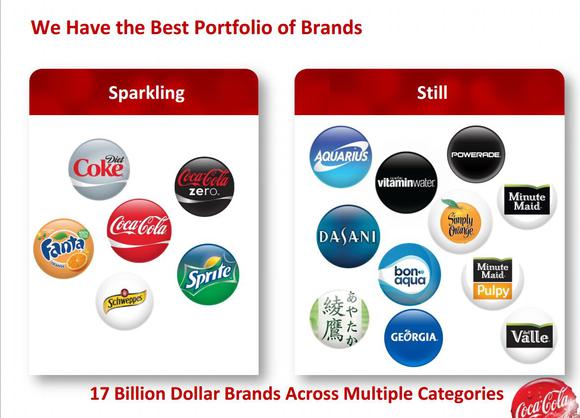 Why might you buy Coca-Cola?
Buffett began buying shares of Coca-Cola in 1988. Much of his reasoning throughout his ownership makes sense today. He noted in his 1988 letter to shareholders that "We expect to hold [it] for a long time. In fact, when we own portions of outstanding businesses with outstanding managements, our favorite holding period is forever." He added in 1993:

Is it really so difficult to conclude that Coca-Cola and Gillette possess far less business risk over the long term than, say, any computer company or retailer? Worldwide, Coke sells about 44% of all soft drinks, and Gillette has more than a 60% share (in value) of the blade market... The might of their brand names, the attributes of their products, and the strength of their distribution systems give them an enormous competitive advantage, setting up a protective moat around their economic castles. The average company, in contrast, does battle daily without any such means of protection.

Companies such as Coca-Cola and Gillette might well be labeled "The Inevitables." Forecasters may differ a bit in their predictions of exactly how much soft drink or shaving-equipment business these companies will be doing in ten or twenty years. ... Indeed, their dominance will probably strengthen. Both companies have significantly expanded their already huge shares of market during the past ten years, and all signs point to their repeating that performance in the next decade.

So what does Coca-Cola have going for it today? A lot, including the power of its brand name. It held the No. 1 spot on Interbrand's annual ranking of global brands for 13 consecutive years, before being displaced by Apple in 2013 and then pushed down to third place by Google in 2014. Interbrand estimates the brand's value at nearly $82 billion.

Then there's Coke's dividend, which recently yielded 2.8%. It has been hiked by an annual average of 9% over the past decade, and its payout ratio is 65%, suggesting more room for growth. Want free cash flow? Coke generates more than $8.5 billion annually. That is helped by fat profit margins, with net margin recently topping 18%. Coke's share count has been dropping, too (due to share buybacks), which boosts the value of remaining stock. A decade ago it had almost 4.9 billion shares, but that has dropped about 8% to nearly 4.5 billion shares.

Coca-Cola is a global powerhouse, employing about 700,000 people. It has 17 billion-dollar brands, such as Diet Coke, Fanta, Sprite, Coca-Cola Zero, vitaminwater, Powerade, Minute Maid, and Simply. In its own words, "Globally, we are the No. 1 provider of sparkling beverages, ready-to-drink coffees, and juices and juice drinks. Through the world's largest beverage distribution system, consumers in more than 200 countries enjoy our beverages at a rate of 1.9 billion servings a day." It certainly seems like a winner worth investing in.

Why might you not buy Coca-Cola?
But hold on. Everything is not quite perfect at the company. For one thing, those fat profit margins have fallen in recent years. Revenue and net income have slipped in the past few years, too. The company reported its third-quarter results on Tuesday, with global volume growing just 1% year over year and revenue remaining flat. Earnings per share dropped 13%, though only 6% on a currency-neutral basis. (Operating income, though, was up 10%.)

Coca-Cola seems to have lost its way a bit, and recently issued a strategy full of growth drivers such as cost-cutting and streamlined operations. Future success isn't guaranteed, either, as even its sturdy business is challenged by the rise in popularity of still drinks and by concerns about the safety of sodas.

Valuation is another concern. With shares up about 7% over the past year, the company's P/E and forward-looking P/E (21.7 And 18.4, respectively) are both above its five-year average of 18.3.

Coca-Cola still has the resources to fuel a lot of further growth, especially with improved strategies. Bulls are optimistic about its stakes in Monster Beverage and Keurig Green Mountain and about its prospects in emerging markets. It's not crazy to buy shares now, enjoying a generous dividend yield and aiming to hang on for decades, but it doesn't seem to be a screaming bargain today and might only be a slow grower in coming years.