Facebook came through with results most people expected, and the market's punished its plus-sized growth with a painful drop tonight.

Facebook (META -0.83%) reported its third-quarter earnings  this afternoon, and as usual, it was one of the most-watched reports of the season. The world's largest social network beat both top- and bottom-line expectations for the quarter by reporting $3.2 billion in revenue and $0.43 in adjusted earnings per share,  against a Wall Street consensus of $3.12 billion in revenue and $0.40 in EPS.

Despite a strong showing on the surface, Facebook's shares have collapsed in after-hours trading, losing 11% of their value as of this writing. That's because there was little that might come as a real surprise in the company's third-quarter report, which showed the same high level of growth in many key metrics, as well as a consistently impressive ability to monetize a userbase that seems poised to surpass the population  of China in size any day now. Everything was more or less as expected -- and big pops tend to come only from big surprises.

Here are some other key numbers you need to know from Facebook's latest earnings:

To get a better sense of how Facebook's grown over the past few years, let's illustrate some of these numbers, starting with the key top-line metrics -- revenue and ARPU: 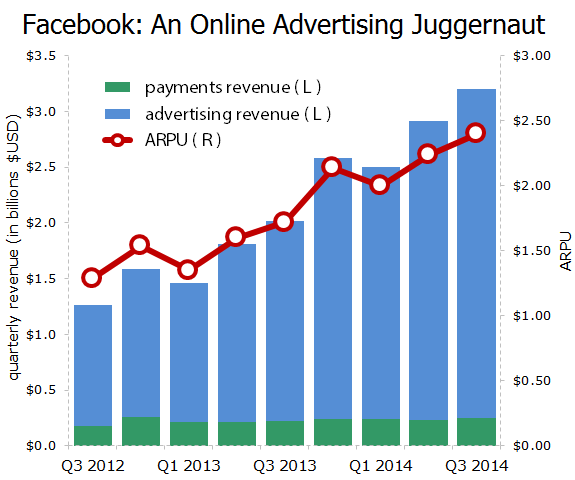 As you can see, Facebook has not only made huge strides on the top line, which has nearly tripled in two years, it's done so by monetizing its users far more effectively -- ARPU was up 39.5% year-over-year, and on a trailing 12-month basis Facebook has now earned $8.78 per user, which is incredible when you consider that its trailing 12-month ARPU was just $5.32 two years ago, and only $3.65 at the end of 2010. An improving ability to monetize its users has also translated into improving bottom-line metrics, as you can see here: 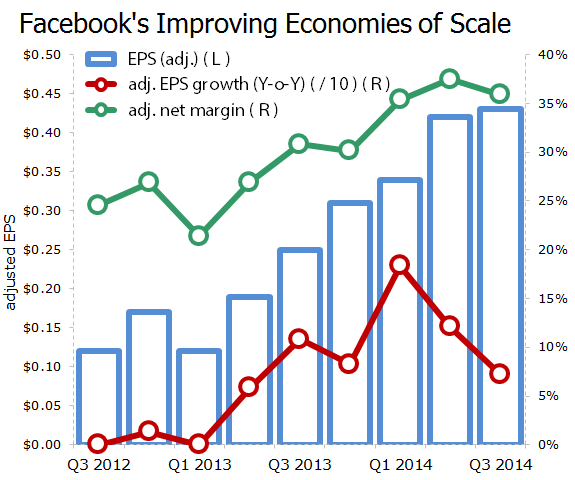 Facebook won't be able to double its EPS every quarter, but sustaining high double-digit EPS growth rates at a point when it already serves more than half of the world's non-Chinese Internet users is still a huge accomplishment. 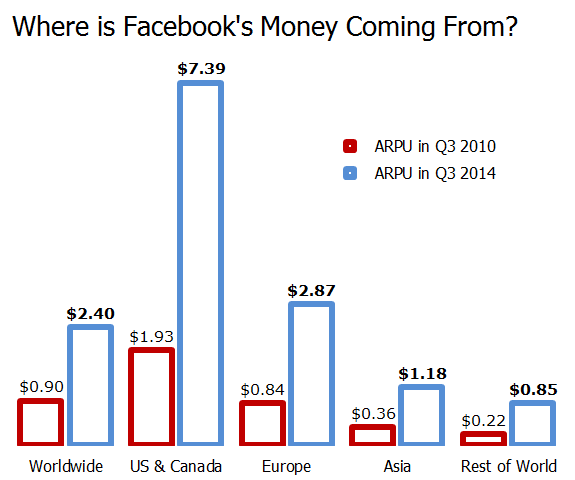 Facebook continues to become one of the world's strongest mobile companies, as some of its mobile metrics might indicate. The company generated 66% of its advertising revenue from mobile users, and 456 million MAUs were mobile-only, in the third quarter. Based on these numbers, Facebook earned approximately $793 million from mobile-only users, which is more than a quarter of all ad revenue Facebook earned during the quarter. Considering the fact that Facebook's first quarterly report showed total mobile revenue of roughly $30 million (just 3% of all ad revenue), it's easy to see how Facebook has thus far proven bears wrong. It's been buoyed by mobile ads, every step of the way: 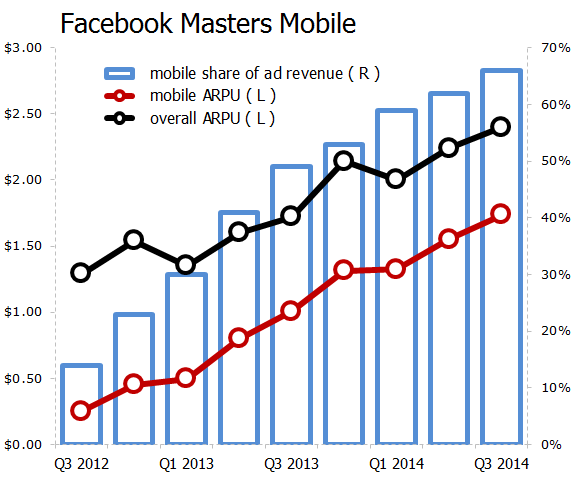 While these numbers are generally impressive across the board, there's nothing truly surprising about them. We expect Facebook to generate more revenue from its users each quarter, and we expect it to do so at a rate that most companies can only dream of. That's why Facebook still has one of the highest valuations of any large-cap company, and it's why the stock is now tanking in late trading. It's simply doing more of what we've come to expect -- and that may no longer be enough.

Alex Planes holds no financial position in any company mentioned here. Follow him on Twitter @TMFBiggles or connect with him on LinkedIn for more insight into investing, markets, economic history, and cutting-edge technology.