"[B]anks have never made money in the history of banking, losing the equivalent of all their past profits periodically -- while bankers strike it rich," Nassim Taleb, author of The Black Swan and Fooled By Randomness, wrote five years ago.

The problem is that banks are susceptible to the same behavioral shortcomings that cause individual investors to underperform the market: They buy high and sell low.

This happens because bankers, like individual investors, "make decisions based on how [they] feel rather than what [they] know," to slightly co-opt the words of Carl Richards in The Behavior Gap.

When times are good, bankers get greedy. They lower credit standards, inflate collateral values, and gorge on high loan volumes. Then, when times get tough and default rates soar, imprudent lenders panic and flood the market with illiquid assets.

It's a tried-and-true cycle that never ceases, no matter how many times it's been repeated in the past. 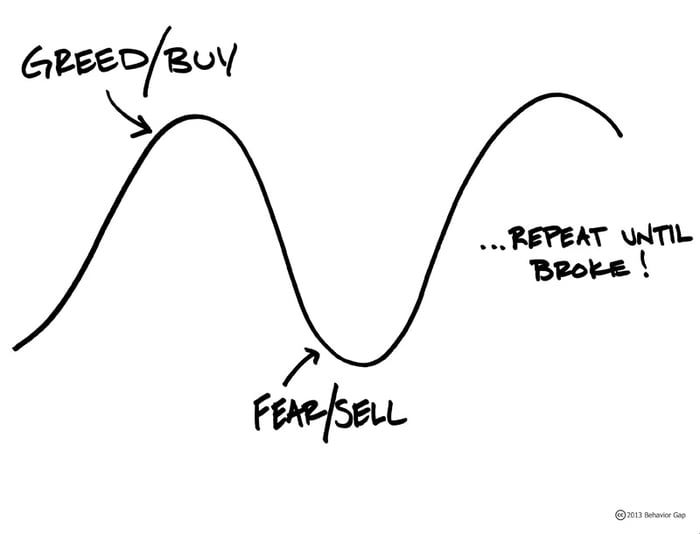 A tale of two banks
There are few better examples of this than former Citigroup (NYSE:C) CEO Chuck Prince's comment in the summer of 2007 that "as long as the music is playing, you've got to get up and dance."

He was referring to Citigroup's decision to continue funding private equity deals and securitizing subprime mortgages despite evidence that the markets for both had already reached the breaking point. In short, the nation's then-biggest bank by assets wasn't willing to concede market share at any price.

By contrast, consider the comments of Wells Fargo's (NYSE:WFC) chairman and CEO from earlier in 2007 (emphasis added):

Because of our prudent lending [...] and our decision not to make negative amortization loans, we estimate we lost between two and four percent in mortgage origination market share from 2004 to 2006. That translates into losing between $60 billion and $120 billion in mortgage originations in 2006 alone. We're glad we did. Such lending would have been economically unsound and not right for many borrowers.

In case you don't know how this played out for the two banks, here's a chart of their respective stock performances over a stretch that encompasses the lead up to the financial crisis and its aftermath: And, just for the record, Citigroup was far from alone. For instance, here's the former CEO of Security Pacific, a regional bank based in California that was driven under by bad loans in the 1990s:

[I]n this environment of diminishing traditional business, Security Pacific and its competitors had little choice but to pursue riskier, albeit more profitable, avenues for growth -- expanding into new geographic and product markets and originating more loans to the developing countries, energy and energy service companies, real estate companies, land developments and, of course, participation in the notorious leveraged buyouts. We believed we could manage these risks through good times and bad and, frankly, had little choice but to try.

And in a slightly different context, as I've noted previously about Bank of America (NYSE:BAC):

Will next time be different?
Over the last few years, an argument I've heard time and again from self-described bank analysts is that lenders like Citigroup and Bank of America have learned their lesson; that they won't commit the same errors again; that the next time truly will be different.

But there's reason to doubt this. "Unusual managerial discipline will be required, as it runs counter to normal institutional behavior to let the other fellow take away business -- even at foolish prices," wrote Warren Buffett in 1977.

Moreover, as my colleague Morgan Housel observed in The Wall Street Journal:

Ultimately, prudence is ingrained in culture. And culture is instilled through decades of adroit risk management.

And he's right. Bank of America nearly went under in the late 1980s after overextending itself internationally and underwriting toxic loans here at home. To right the ship, it brought in an entire team of Wells Fargo executives who ran it for the next decade.

It wasn't long, however, before Bank of America slipped back into its old ways. In the late-1990s, it found itself overexposed to a teetering hedge fund. Its savior this time was North Carolina-based NationsBank, which assumed control of Bank of America in a purported "merger of equals" that, as the latter's executives soon discovered, was anything but.

Fast-forward another decade to the financial crisis, and Bank of America had to be ripped from the jaws of failure yet again -- though this time by the U.S. government, as the nation's then-biggest retail bank was too large for a private sector solution.

And this story isn't unique. To Taleb's point, the fact that most banks don't make money over the long run is the rule and not the exception.