The menu at your favorite restaurant is about to look different. The Food and Drug Administration has finalized rules requiring restaurants with at least 20 locations to post calorie counts on menus for all food. Proponents say this will change how people eat as restaurants will be shamed into offering more nutritious items, and diners will make less-caloric choices when ordering. But there's also evidence that the labeling won't affect how Americans eat away from home.

Chipotle Mexican Grill already lets you know up front how many calories you're consuming. Photo: Flickr via eyeliam.

The regulations that take effect in one year are really sweeping in their breadth. They also snare convenience stores, movie theaters, and prepared food sold at grocery stores. Pizza chains and vending machines operators also have to comply. Chains such as Chipotle (NYSE:CMG) and McDonald's (NYSE:MCD) were out in front of the mandate and already post calorie counts.

The regulations are also going to be costly.

The FDA estimates it is going to cost $59 per menu item on average to determine nutrition information. The National Restaurant Association supported the new regulations, and set up a program to help member restaurants analyze nutrition data. It estimates the starting cost to have one item analyzed is $150.

However, the new regulations -- which were among many components hidden in the Affordable Care Act, also known as Obamacare -- seem unlikely to have an impact on the dietary habits of Americans even as people worry about obesity.

Obesity in the U.S. is said to be an "epidemic." The Centers for Disease Control says that more than one-third of U.S. adults are obese, or 78.6 million people. It estimates the annual medical cost of obesity is $147 billion in 2008 U.S. dollars.

Proponents say that just proposing the new rules created change we can believe in, causing some national restaurant chains to introduce healthier fare ahead of the rules' adoption.

An oft-cited example is Applebee's. The DineEquity (NYSE:DIN) chain introduced 550-calorie entrees last year. But the restaurant says it originally introduced these low-calorie items in 2008, and just added to the existing offerings.

Now, 2008 was when New York City passed its own menu-labeling law, but that doesn't mean there was a causal relationship. Applebee's has fewer than 40 restaurants in New York's five boroughs. DineEquity operates approximately 2,000 Applebee's in 49 states and 16 countries. One city with a handful of restaurants would likely not drive policy for the entire chain.

The advocacy organization Center for Science in the Public Interest also points to Starbucks (NASDAQ:SBUX). It says the coffee shop cut the fat and calories from pastry and beverage items after New York passed its law; its blueberry muffin, for example, went from 400 calories to 320 calories.

Starbucks has also removed high fructose corn syrup from its menu. That eliminates 53 calories per tablespoon.

Their sodas are regularly accused of being part of the obesity problem, and the soda giants removed sugar to reduce calories in their soft drinks. Yet consumers have rejected the artificial sweeteners they replaced them with. Concerns about aspartame, high fructose corn syrup, and acesulfame potassium are part of the cause of dramatically falling diet soda sales. 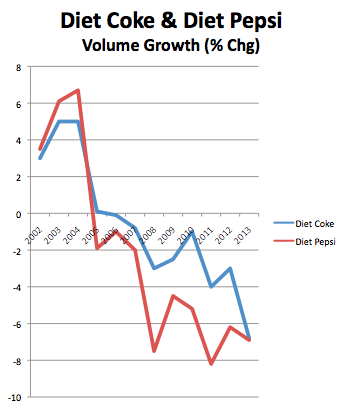 Both Coke and Pepsi are now looking for natural sweeteners to boost sales. They hope plant-based stevia can help. But they don't make stevia naturally -- it's another highly processed sweetener.

Bloomberg Businessweek sees the new rules leading restaurants to swapping out fries for fruit. That's one possibility. Another is that restaurants will add healthier items to the menu, just like they already do, but because consumers have become more health-conscious, not because of regulations.

Besides, studies show that menu labels don't work. Researchers at Carnegie Mellon found people order what they like regardless of calories.

So restaurants, convenience stores, supermarkets, and even vending machines now have to label prepared foods with their calories. It will cost them billions of dollars to comply, but likely won't improve the obesity problem.

A national menu labeling law may be better than the patchwork quilt of city ordinances, it just doesn't equate to good public policy. Or good health.