Please ensure Javascript is enabled for purposes of website accessibility
Log In Help Join The Motley Fool
Free Article Join Over 1 Million Premium Members And Get More In-Depth Stock Guidance and Research
By Patrick Morris - Dec 12, 2014 at 8:15AM

One number is often repeated when discussing Berkshire Hathaway, but Buffett himself wants us to know it doesn't provide a clear picture of the true value of his company.

If you've followed Warren Buffett's Berkshire Hathaway (BRK.A 1.66%) (BRK.B 1.71%) for any bit of time -- whether it be one year or 50 -- you're likely well familiar with the oft-cited number comparing the growth in the book value of Berkshire (19.7% annually) relative to the growth of the S&P 500 with dividends (9.8% annually) since Buffett took the reins in 1964.

But would you believe me if I told you that number didn't really matter?

How about if Buffett said as much?

The number
The first thing investors see following the table of contents in the Berkshire Hathaway Annual Report is the table comparing how Berkshire has fared versus the S&P 500 in growing its book value.

It is understandable, because it demonstrates the incredible outperformance of Berkshire relative to the broader market: 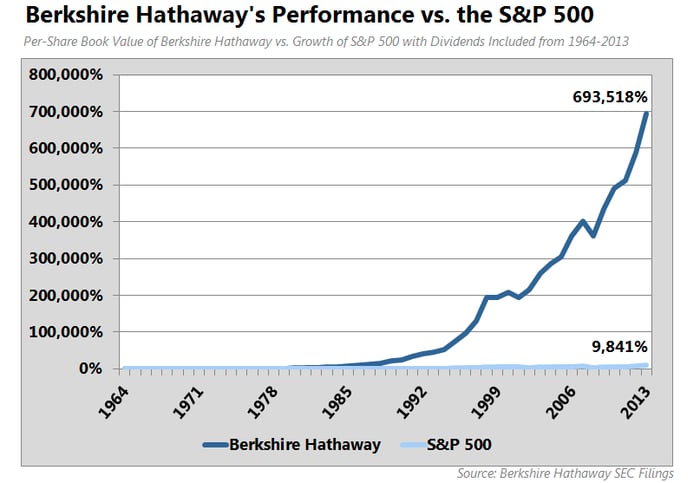 It bears repeating this is not the return delivered by Berkshire Hathaway shares, but instead the growth in the book value of the equity in Berkshire. And this is a critical distinction.

While over the long term the share price and book value move in congruence with one another, it is not true year to year. For example, in 2008 Berkshire's stock price plummeted roughly 30%, but its actual book value fell by just 10%.

Any way you look at it, you can see just how well Berkshire has performed over the last half-century. Yet, in a surprising admission nearly 20 years ago, Buffett revealed that while book value is important, it isn't the end-all be-all figure we should look toward when gauging the value of Berkshire.

The honest admission
In the 1996 letter to Berkshire Hathaway shareholders Buffett said, "I dwell on this rise in per-share book value because it roughly indicates our economic progress during the year. But, as Charlie Munger, Berkshire's Vice Chairman, and I have repeatedly told you, what counts at Berkshire is intrinsic value, not book value."

And what is "intrinsic value" exactly? In Buffett's own words, "Intrinsic value can be defined simply: It is the discounted value of the cash that can be taken out of a business during its remaining life."

Or said differently, it is the value of the business based on the future capability of its earnings, not simply what is recorded on its balance sheet.

For example, Buffett noted in 1999, "Businesses such as See's and Buffalo News are now worth fifteen to twenty times the value at which they are carried on our books."

When you consider that See's has continued to deliver incredible returns, that spread is even greater today.

So what is the actual intrinsic value of Berkshire Hathaway and the litany of businesses it owns?

Well, that's an easier question to ask than to answer. Once again turning to Buffett, he noted in the 2013 letter to shareholders -- as well as many others -- "As much as Charlie and I talk about intrinsic business value, we cannot tell you precisely what that number is for Berkshire shares (nor, in fact, for any other stock)."

Thankfully though, he does provide a bit of guidance as to how we may estimate what it is.

The true value of Berkshire
In the 2010 letter to shareholders Buffett suggested that to try and understand the value of Berkshire we must examine two easily identifiable quantitative measures, and one that is much more difficult to get a handle on.

The first is the value of Berkshire's "investments: stocks, bonds and cash equivalents," which stood at a per-share value of $129,253 at the end of 2013.

The next is its "earnings that come from sources other than investments and insurance underwriting," and its per-share pre-tax earnings last year were $9,116.

And the final piece of the puzzle is "the efficacy with which retained earnings will be deployed in the future."

In other words, how well investors believe the company will be able to deploy the money it generates to then grow its earnings in the future. Or as Buffett goes on to say:

This "what-will-they-do-with-the-money" factor must always be evaluated along with the "what-do-we-have-now" calculation in order for us, or anybody, to arrive at a sensible estimate of a company's intrinsic value. That's because an outside investor stands by helplessly as management reinvests his share of the company's earnings. If a CEO can be expected to do this job well, the reinvestment prospects add to the company's current value; if the CEO's talents or motives are suspect, today's value must be discounted.

And knowing how effectively Buffett and his managers have deployed capital in the past, this number at Berkshire is likely to be huge.

So with all that said; what does this mean for investors seeking to gauge the true value of Berkshire? Let's do a simple bit of back of the envelope bit of math. Say investments didn't demand any premium, and Berkshire's pre-tax earnings per share traded at a very conservative price-to-earnings (P/E) of 10. With these assumptions, then the market seems to be indicating it believes the future potential value creation at Berkshire is worth essentially...nothing:

The key takeaway
So what should investors make of all this?

Buffett is right in saying neither he nor Charlie -- nor anyone else for that matter -- can definitively calculate the true intrinsic value of Berkshire. But we can be certain it is worth a whole lot more than the $8.2 billion (or just 2.2% of its total value) the market currently suggests it is.

And at a time when nearly everyone suggests the market is overpriced, to the delight of long-term investors, the numbers indicate Berkshire simply isn't.