Please ensure Javascript is enabled for purposes of website accessibility
Log In Help Join The Motley Fool
Free Article Join Over 1 Million Premium Members And Get More In-Depth Stock Guidance and Research
By Bradley Seth McNew - Dec 14, 2014 at 10:10AM

Even though Macau pulls in nearly seven times as much gaming revenue as Las Vegas, it's still a much younger gaming economy. Here are the three things it needs to learn from Sin City.

Macau has been the most exciting gaming economy in the last decade. Since the major casinos like Wynn Resorts (WYNN 1.73%), MGM Resorts International (MGM 1.98%), Las Vegas Sands (LVS 2.60%), and Melco Crown (MLCO 0.76%) started building there around 2004, the profits from Macau have been unbelievable.

This was especially true between 2008 to 2013, when the Las Vegas gaming economy was hammered by the American recession, but Macau flourished. However, the downturn in Macau this year and the re-emergence of Las Vegas as a casino growth market remind us that Las Vegas, as the much more mature economy, has a lot to teach Macau. While Macau's long-term growth looks great, learning these three lessons will be crucial to its development into a world-class gaming market like Vegas.

1. The need for non-gaming entertainment
The main reason Macau revenues have been hammered this year is the decline of the VIP gaming segment, the high-net-worth players mainly from Mainland China. Ultimately, this a good thing, as the mass market of Macau, the largest growth segment now, is going to continue driving growth in Macau for the long term. But unlike in Las Vegas, where a plethora of shows and non-gaming entertainment drives much of the economy, Macau offers little other activities for those mass-market visitors.

Non-gaming revenue can be very important. For example, MGM has been one of the big winners in Las Vegas this year, but a large part of its success is that hotel revenues grew thanks to higher room rates and occupancy. This non-gaming revenue helped drive up operating margins, and ultimately fueled higher EBITDA at its Las Vegas Properties, which contributed to MGM's overall earnings success ahead of Macau-focused companies like Las Vegas Sands and Wynn.

A big difference between Las Vegas and Macau is that many people -- even whole families -- come to Las Vegas to see the kinds of unique entertainment made famous by the likes of Cirque du Soleil and Celine Dion. Macau doesn't have this.

A scene from Macau's one large live show, The House Of Dancing Water. Source: TheHouseOfDancingWater.com.

Macau does have one major live show called The House of Dancing Water at Melco Crown's City of Dreams casino, which was produced by former Cirque du Soleil producer Franco Dragone. But that show was created over four years ago, and while it still runs and does very well, there has been nothing else like it to come to Macau and prove to be as successful since. If Macau casinos want to keep attracting mass market consumers, especially families, they will need to ramp up their non-gaming entertainment options.

2. The need for a more diversified base of visitors
One way Macau has taken on way too much risk is that the vast majority of its visitors come from mainland China, especially mainland VIP players. Because this specific segment made up such a large part of these gaming companies' revenues, when the Chinese government started to crack down on high-net-worth players, much of Macau's revenue went with it. Even though the number of visitors from the mainland is still growing, Macau needs to get visitors from more than just China.

Including Hong Kong, 84% of gamers in Macau come from China. A rising middle class, increased attraction to leisure travel, and more non-gaming family entertainment in Macau will help keep bringing Chinese families, but now Macau needs to market more aggressively to Japan, Korea, and other wealthier Asian countries that don't have as many gaming options within their own borders.

Casinos and most forms of gambling are forbidden to nationals within Japan, and are under a lot of red tape in South Korea. Following the tried and failed passing of legalized gaming in Japan earlier this year, and the slow expansion of gaming for nationals in South Korea, this could be a large and affluent market for gaming companies in Macau to market to, a group that, combined, only made up 3% of Macau's 2013 visitors. 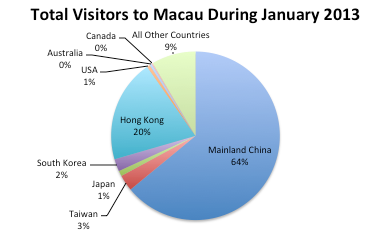 84% of Macau visitors were from Mainland China and Hong Kong in 2013. This needs to change if Macau wants to lessen its exposure to risk from a Chinese slowdown. Source: Macau Statistics Bureau.

However, for many Japanese and Korean consumers, going to China isn't exactly a dream vacation, and it will be up to these casino companies to prove why their resorts warrant a visit to Macau. With each of these companies opening a new resort on Macau's Cotai strip in the next 12-24 months, now is the time to do just that.

Las Vegas attracts visitors from all over the U.S. and all over the world. In 2013, 80% of Las Vegas visitors came from the United States (52% from western states) and 20% came from a foreign location, an increase from previous years, according to the Las Vegas Convention and Visitors Authority.

3. The need to become a gathering place for more than gamblers
Another way Las Vegas has held its appeal as a world-class destination is its ability to partner with and host a vast array of conventions, business meetings, sporting events, etc. Vegas is the gathering place for everything from the 2014 USA Table Tennis National Championships to the National Association to Advance Fat Acceptance (NAAFA) convention in 2013. Vegas will host 23 major conventions like this in December 2014 alone.

The Venetian Macao did host a Herbalife Asia convention earlier this year, but a convention of this size is rare in Macau, especially events with a focus on anything other than the Asian gaming industry. In fact, the number of conventions planned in Macau in all of 2015 (including those held at local universities) is less than what Vegas will host just this month.

The local government and casinos need to do a better job of setting up hosting space and attracting important groups to gather there. While Vegas continues to cultivate and market its meeting spaces, Macau is still stuck on promoting mostly gaming alone.

Is there still growth left in Macau?
For gaming investors, the downturn in Macau this summer has meant over 30% losses in some cases. Still, the long term for Macau looks like a strong bet, especially with the rise of the mass market segment there. But for Macau to develop into a world-class gaming hub and destination for visitors the world over, it will need to learn these three important lessons from Las Vegas for continued success.