The whole energy sector has been absolutely punished by the freefall in oil prices. Investors are acutely worried that the downdraft in prices will make it impossible for companies to make any money drilling. However, one of the reasons for this worry is because investors are focusing on break even costs that were projected when oil prices were a lot higher. The problem with those breakeven costs is that they're not exactly set in stone.

An example of these breakeven points can be found on the slide below, which I pulled from an Emerge Energy Services L.P. (NYSE: EMES) investor presentation. 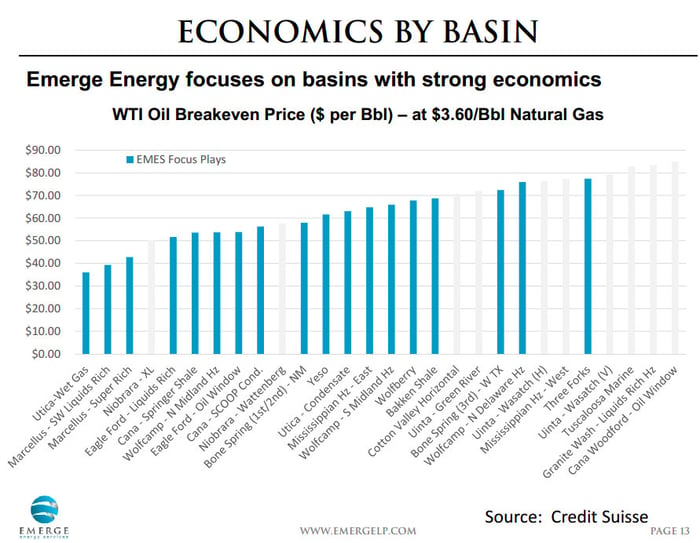 As that chart shows there are several shale plays that need oil well above today's current prices of around $60 to make money. However, what some are missing is that these break even costs tend to drop when oil prices fall. The drop isn't as deep, but it does change the economics of some plays rather substantially.

We've seen this a number of times throughout the energy industry's history. Most recently, however, was the deep drop in oil prices due to the financial crisis. At that time the operating costs of energy companies also dropped, which helped to mitigate some of the plunge in oil prices. This historical reference was pointed out at a recent investor conference when BreitBurn Energy Partners LP's (OTC:BBEPQ) CFO Jim Jackson made the following comments,

Obviously, moves in commodity prices extended over time are reflected in our cost structure, ultimately. On that note, if you go back to 2008 and 2009... we saw our operating costs dropped by almost 20%. So for those of you that are thinking about lower oil prices for a longer period of time, go back and take a look at what LOE per BOE did at BreitBurn during that period. And think about that in terms of what happens to our costs and, ultimately, what happens to our capital costs, too, as they get essentially rebased in an environment where things start to improve.

As Jackson points out the company's costs dropped by 20%, which can make a very big difference when we're talking about breakeven points or cash flow. A similar drop in costs could push a breakeven point from say $70 per barrel down to $56 per barrel, which could be the difference between making money and losing money for some drillers in today's environment

Jackson, however, isn't the only energy executive to point this out. Kinder Morgan Inc's (NYSE:KMI) COO Steve Kean pointed out the same thing when talking about his company's oil business. He noted that while the company's returns will be affected by lower oil prices, that impact won't be as great as the full drop. He noted that,

Now, there's another side of that too. It's smaller, but oil -- previously when oil prices have gone down, the cost of getting the oil out has gone down too. It's not enough to offset it, but it's a partial mitigant. So, we'll see some of that too.

He notes that while costs don't drop lock-step with oil, they do fall and that helps to partially mitigate the impact of the drop in oil. Further, it doesn't take all that long for these lower costs to show up.

We're already seeing this happen
This fact that costs are already falling was quite evident by statements made by Halliburton Company's (NYSE:HAL) CFO Mark McCollum at a recent energy conference. The oil field service company is already making adjustments due to the current market environment to bring its costs down so that it can pass those reductions on to its customers to keep its assets fully utilized. He said that,

From a cost standpoint we are already pulling in. We are right now anticipating a restructuring charge in the quarter, probably to the tune of about $75 million as we trim out some headcount and activities around the world -- as a just. Just basically remind you, we have been here before. It's not our first rodeo.

Unfortunately, this particular cost reduction resulted in 1,000 jobs being eliminated in the Eastern Hemisphere. However, in terms of costs for the company it's taking the upfront charge of $75 million so that it can see the longer term cost savings from those eliminations. Those longer term savings will allow the company to keep its fees low enough to continue to stay busy. McCollum noted this when he said,

[...] We are a low-cost service provider and we are very effective. Customers tend to high-grade to Halliburton if we've got time on our schedules to do work. And so while we will adjust there will probably be some marginal adjustments. But one thing that I am not necessarily worried about in this environment right now is utilization, the ability to keep our assets working. This is a time if you have seen us in the past just like thinking like you we tend to see this as an opportunity, not as a problem.

Basically, he's saying that the company will underprice its competitors if necessary to keep its assets fully utilized. Not only will this enable the company to take market share from weaker competitors, but the lower prices will drop the break even points for customers drilling new wells. That will help to keep everyone busy and making money, even if it's not as much as before.

Investor takeaway
The energy industry will adjust to the new reality of lower oil prices. This is why the models that told us that the breakeven prices for drilling were in the $70s or $80s are likely no longer accurate because costs will come down, which will move those breakeven points lower as well. So, while lower oil prices will slow the oil boom, it won't necessarily end it all together.