Dollar store chain Dollar General says not to forget it's still in the hunt. Photo: Mike Mozart via Flickr.

Family Dollar investors are poised to vote Tuesday on whether to accept rival Dollar Tree's (NASDAQ:DLTR) offer to buy the company for $8 billion. Dollar General, meanwhile, wants everyone to remember it has a competing bid that is superior in value, and that it remains in active talks with the Federal Trade Commission over what it would take to get the deal done.

Family Dollar's board unanimously rejected Dollar General's offer and recommends shareholders do, too, arguing that such a merger would never make it over antitrust hurdles.

I've argued, though, that Dollar Tree's business model would be fundamentally changed via the Family Dollar deal, because the two companies have different pricing models and target different demographics, and it would be better for Dollar Tree's shareholders if Dollar General won the bidding war.

Shares of Dollar Tree are up more than 25% since it first bid for Family Dollar's business at the end of July, only slightly less than the 30% gain achieved by its target. Dollar General is up about 23%. 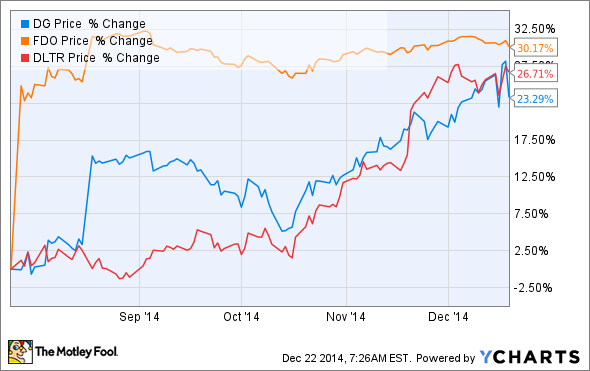 There's a reason for the surge
It might be tempting to say Dollar Tree's gains largely result from the potential for acquiring its rival. However, as the chart shows, most of the gains made by the pure-play dollar store have come in the past few weeks, after it reported earnings.

That suggests that what is driving Dollar Tree higher is not so much M&A activity (though the potential to more than triple its size if the deal goes through creates some excitement), but rather how well it is running its business.

It also raises the question: Is Dollar Tree's stock still a buy? I'd argue, no.

Not because of the gains its stock has already made, but because, Dollar Tree might get the results it wants in Tuesday's vote by Family Dollar investors. And that could upset the balance of the business it has built and cause the stock to lag going forward.

A solid game plan
Dollar Tree's third-quarter revenue jumped 11% on the basis of a 5.9% increase in same-store sales from the year-ago period, the company's largest rise in comps in three years. Per-share profit surged 19%, leading the dollar store chain to raise full-year guidance for sales to between $8.52 billion and $8.58 billion and for profit to between $2.97 and $3.04 per share.

Dollar Tree continues to open more stores, install more refrigerators and freezers -- which it says provide a 5% to 10% sales boost at each store with them -- and introduce more brands and value for consumers. Consumable goods bring customers back into the stores, and they buy additional goods during each trip.

The business is on a roll, and coupled with expansion in Canada and online, Dollar Tree is hitting on all cylinders.

Which is exactly why successfully winning the battle for Family Dollar could be bad.

Too big, too fast
As I noted, Family Dollar is a very different business than Dollar Tree, one that more closely aligns with Dollar General's multiple price points for goods. And make no mistake, an acquisition would vastly expand Dollar Tree's footprint, nearly tripling its size in number of stores operating and doubling revenue.

Moreover, Family Dollar is a troubled company that has not yet enacted a turnaround plan. Carl Icahn's proposal for Family Dollar to sell itself was essentially the extent of the plan, and now that it has competing bids, Icahn closed out his Family Dollar stake. It would be up to Dollar Tree and its shareholders to carry out the reversal strategy. A merger such as this could lead to indigestion as the logistics of melding two competing corporate cultures rarely goes smoothly.

Dollar Tree dabbles in prices points above a dollar with its Deal$chain, but they only comprise a tiny portion of company revenue. Photo: harry cappas via Flickr.

A penny saved is a penny earned
Dollar Tree has a consistent pay-one-price business model that resonates with consumers, a strategy to grow organically, and a unique position as the lone national pure-play dollar store chain. A Family Dollar acquisition upends that plan.

So until this merger works itself out, I can't recommend Dollar Tree's stock. If Dollar General wins, expect Dollar Tree shares to pull back. Good! That would give investors a better opportunity to buy in and profit from the long-range goals already in place.