In September I took a deep look at the valuation of Pioneer Natural Resources' (NYSE:PXD) stock. I reviewed its valuation relative to its peers, as well as the company's own historical average valuation, and I came to the following conclusion:

A lot has happened in the months since that was written. The company has another quarter's results in the books, giving us more data. Not to mention, this happened: 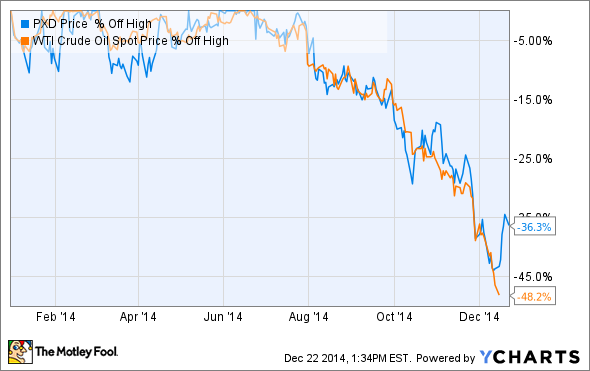 With the stock off 36% from its 52-week high thanks to a 48% plunge in oil prices, the company's valuation has certainly changed. So, with fresh eyes and fresh numbers, let's revisit Pioneer's valuation against its historical averages.

Drilling down into the numbers
My last assessment of the company's valuation addressed a basket of common energy valuation multiples. I then compared this basket to the company's 10-year historical average multiple. The numbers looked like this:

The company was selling at a premium to its historical average across the board, and at a premium to its peer group. There was a reason for this premium: the company is estimated to be sitting on about 11 billion barrels of oil equivalent in potential recoverable resources. That is a lot of energy, but given that these estimated recoverable resources needed higher oil prices to be extracted profitably, there is significant risk this potential might not be achieved.

Still, keeping that potential in mind, let's look at the company's updated valuation against those same historical numbers. 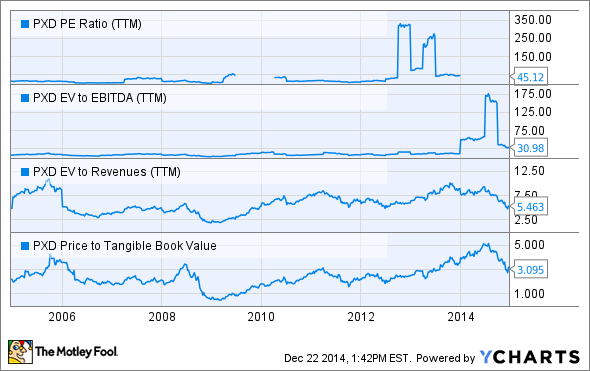 What we see here is that the valuation has not come down much at all. In fact, both the price-to-earnings ratio and the enterprise value-to-EBITDA multiple have increased as the underlying earnings have fallen farther than the stock price. However, some of that involves a big loss the company reported in fourth-quarter 2013 due to a writedown of Pioneer's natural gas properties, as well as some assets it sold. That writedown affected the company's underlying earnings and is skewing the numbers higher. But when looking at other metrics, such as price-to-tangible book value, the company's valuation remains higher than its historical average.

What does this mean for investors?
Despite the sell-off in its stock, Pioneer Natural Resources is trading at a high-end multiple. While the company is sitting on a lot of oil, much has to go right to justify the company's current valuation. First, the company needs oil prices to head higher in a hurry. While 85% of its production is hedged next year, the types of hedges it used left Pioneer overexposed if oil prices dramatically sold off, which is exactly what happened. That means its earnings are likely to fall off a cliff, and thus its backward-looking earnings multiples are only going to seem more inflated if oil prices don't rocket higher.

The company also needs higher oil prices over the long term. Its Permian Basin-focused oil plays need higher oil prices to drive the high rate of profitable growth investors are paying a premium to enjoy. Said another way, $55 oil will not allow the company to achieve its growth goals. With Pioneer's valuation already at a premium due to the high expectations of growth investors, there is seemingly some downside risk if that growth doesn't materialize.

Bottom line: Pioneer Natural Resources' valuation has not come down enough to make it a compelling stock to buy right now. Its valuation is still at a premium unless oil prices head much higher. There are better oil stocks to buy today that can generate strong returns for investors even at current oil prices.