Buffett first bought into Wells Fargo in 1989 and then in 1990. 25 years later, the Oracle of Omaha is still a Wells Fargo bull.

Let's celebrate this fantastic investment by revisiting Buffett's initial thesis and looking for lessons we can apply to our own investing.

A bargain for a great company
The late 1980s and early '90s were characterized by a bit of a panic in the banking industry. Real estate prices were collapsing, and lenders were taking a beating on their balance sheets and in the markets.

Wells Fargo was no exception. The bank gave back nearly 34% of its value between June and October of 1990. Competitor Bank of America (BAC 2.32%) fared even worse, losing over 45% during the same tumultuous time. 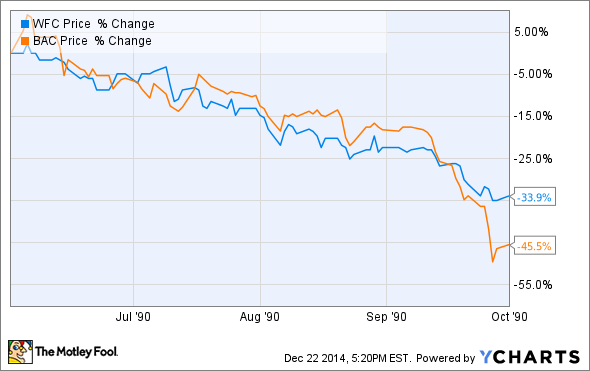 It was at this moment that Buffett pounced, taking full advantage of the panic in the markets.

In Buffett's 1990 letter to shareholders, he described the transaction thusly:

The investment clearly paid off for Berkshire Hathaway (BRK.A 1.28%) (BRK.B 1.25%) shareholders, but I'd argue for a less-than-obvious reason. Wells Fargo's stock has performed remarkably in the intervening 25 years -- that's obvious. But it's also noteworthy that Buffett didn't invest in Bank of America.

Take a look at this chart from Dec. 31, 1989 to the present. It really sums up the amazing judgement and opportunity cost saved by Buffett in buying Wells over B of A. 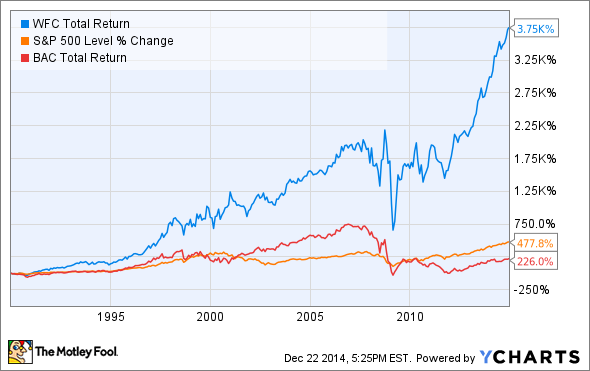 With banks, it's not enough just to "buy low"
How did Buffett know that Wells would outperform Bank of America by such a wide margin? Most likely he didn't know for sure, but I'd guess he was pretty confident. The reason is culture and management.

Buffett speaks to this in the same annual letter. He said:

The banking business is no favorite of ours. When assets are twenty times equity -- a common ratio in this industry -- mistakes that involve only a small portion of assets can destroy a major portion of equity. And mistakes have been the rule rather than the exception at many major banks. Most have resulted from a managerial failing that we described last year when discussing the "institutional imperative:" the tendency of executives to mindlessly imitate the behavior of their peers, no matter how foolish it may be to do so. In their lending, many bankers played follow-the-leader with lemming-like zeal; now they are experiencing a lemming-like fate.

Because leverage of 20:1 magnifies the effects of managerial strengths and weaknesses, we have no interest in purchasing shares of a poorly managed bank at a "cheap" price. Instead, our only interest is in buying into well-managed banks at fair prices.

With Wells Fargo, we think we have obtained the best managers in the business.

In more recent history, we witnessed a near-identical series of events. In 2007 and 2008, the real estate market imploded. Banks across the board were crushed in the market. In the aftermath of this implosion in 2010, Buffett increased his ownership in Wells Fargo. Once again, Wells management proved to be excellent: The bank suffered far less than competitors, and its stock weathered the storm admirably before rebounding to make Wells the world's largest bank by market cap in 2014.

Buffett only invested money in Bank of America after the bank offered him a nearly risk-free options structure that only an investor with the cachet of Buffett could negotiate.

Foolish takeaway
Buffett's approach has remained largely unchanged since 1990. He looks to buy strong companies at good values. He puts a heavy emphasis on management and culture in his analysis, particularly in risky industries like banking.

From there, he lets those strong management teams take care of businesses over the long term. The brilliance of Buffett is his ability to successfully identify those best-of-the-best management teams. How do you do this on your own? For one, you have to think independently. Buffett advises in that same 1990 shareholder letter:

None of this means, however, that a business or stock is an intelligent purchase simply because it is unpopular; a contrarian approach is just as foolish as a follow-the-crowd strategy. What's required is thinking rather than polling. Unfortunately, Bertrand Russell's observation about life in general applies with unusual force in the financial world: "Most men would rather die than think. Many do."