Linn Energy (OTC:LINEQ) made history on Friday, but not the kind of history investors wanted to see. The company reduced its distribution for the first time ever, ending its run of 35 straight distribution payments (over nine years) that were either at or above the previous level.

Remarkably, the company had paid steady distributions even as oil prices plunged during the financial crisis, then resumed growth once the crisis passed. 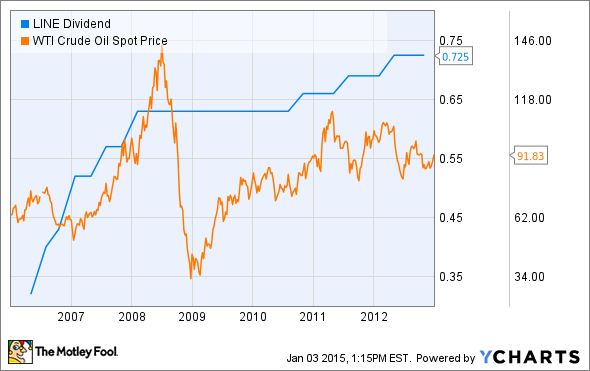 This time, however, Linn Energy could not sustain its payout as oil prices crumbled. Instead, it took action before things got worse, slashing both its drilling budget and its distribution to investors. These moves certainly make sense given the situation, but they should not have been necessary.

Why this time was different

Linn Energy entered the current market turmoil a bit flat-footed compared to the last time oil prices plunged. In late 2008, with the financial crisis in full force, the company had 100% of its production hedged for 2009, 2010, and 2011. Moreover, that summer the company took advantage of a spike in oil prices to reshuffle its hedge portfolio to lock in better future petroleum prices. That action proved prescient when oil prices fell, but Linn was able to live off of its hedges until prices recovered.

However, the following chart shows the company didn't enter the current turmoil in the energy markets completely protected by being 100% hedged several years in advance. 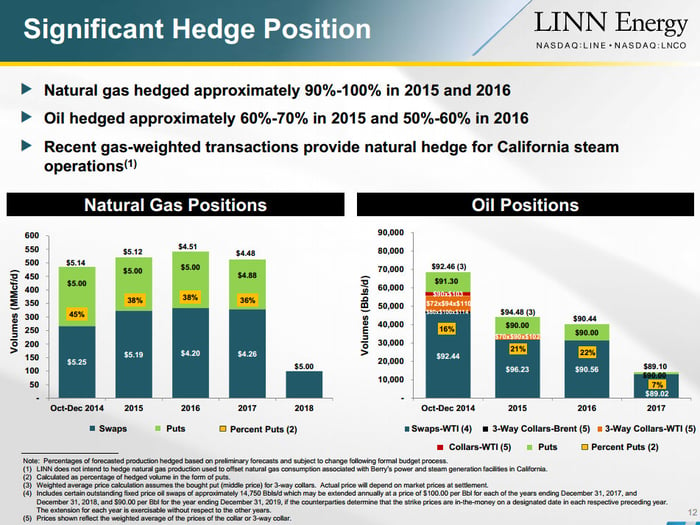 Instead, its hedges were particularly weak relative to the company's own history, which came back to bite Linn Energy as oil prices collapsed.

The company's hedge book has strengthened a bit since that slide was put together, as Linn recently closed the sale of its Granite Wash assets. The company now has 100% of its natural gas production hedged through 2017, while 70% of its oil production is hedged this year and 65% is hedged in 2016. That hedge book remains one of the best in the energy business -- most of Linn's peers hedge far less production for a much shorter duration. That said, it simply wasn't good enough this time, which is why LINN needed to cut its payout now before it dug itself into a deeper hole.

Compounding problems
When oil prices last plummeted, Linn's distribution coverage ratio was a solid 1.14 times in late 2008. Moreover, it forecast at the time that its coverage ratio in the first quarter of 2009 would be 1.2 times, and 1.1 times for the full year. That gave the company plenty of cushion during the dark days of the financial crisis.

The same can't be said this time. At the end of the second quarter, the company estimated it would achieve a 1.1 coverage ratio for 2014. However, just 90 days later Linn indicated it would just squeak by in 2014 with a coverage ratio of 1.02 times. That's a huge shift that was only expected to weaken in 2015 as Linn's oil hedges began to roll off.

Before oil prices fell off the table, analysts thought Linn Energy's distribution coverage ratio would be about 1.17 times in 2015 after accounting for the fact that it was replacing its Granite Wash assets with assets it picked up from Devon Energy (NYSE:DVN). That would have been an excellent coverage ratio, but deteriorating oil prices exposed the weakness in Linn's oil hedge book. Linn Energy's coverage ratio in 2015 is now expected to be 1.18 times, but that is after the company slashed its payout by 56.9%.

Investor takeaway
Linn Energy was caught unready for plunging oil prices. The company typically hedges production 100% for several years in advance, but this time the company's oil hedge book was just too weak to overcome the petroleum free fall. An already weak coverage ratio just compounded the weakness. Because of the uncertainty in the market, Linn did not know how long it could maintain its payout without digging itself into a deeper hole by bridging the cash flow gap with new debt. This is why the company had no choice but to cave in and cut its payout.